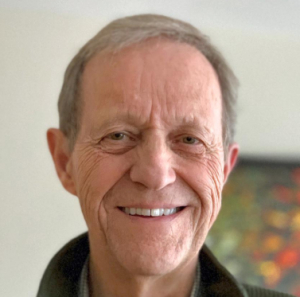 Our website is a vital tool in the Society’s communications tool kit. It not only informs members of upcoming events and Society news, it is our prime means of disseminating information about the Society and interesting Ottawa historical stories to the general public. Its reach is global; we have visitors from around the world. Look for a forthcoming HSO article on our readership.

Despite its success, few are probably aware of the person who built the website and maintained it since its inception. That person is John Reeder. In January 2007, he answered a small advertisement that appeared in the HSO’s quarterly newsletter that read “Help wanted. – HSO webmaster.” After being interviewed by then director Dave Mullington, John had the job. Just a couple of weeks later, on February 8, 2007, the Society’s website went live. It was a modest affair at the beginning, just a few webpages – a Home page as well as pages titled About Us, News, Executive Contacts, Coming Events, and Web Sites of Interest. But it launched the Society into the Internet age.

Since that humble beginning, under John’s guidance, the HSO website grew in complexity and richness. It is now a fantastic repository of information not only about the Society and its many activities, but also about Ottawa’s history and heritage. For students of history, seventy-five issues of the Society’s Bytown pamphlet series are now available on the website free of charge, courtesy of John, as are a growing number of short historical stories on Ottawa. The website also provides a useful one-stop portal to numerous websites and blogs that touch on Ottawa history. As well, there are videos of old Ottawa that teleport us back into time.

But who is this volunteer benefactor of the Society, working steadily and virtually anonymously behind the scenes? John had a first career as a high school teacher. After he retired in 1998 after thirty-two years in front of a backboard, he started a second career. While he shuddered at the prospect of leaving teaching, retirement turned out to be the “best job” he ever had. John became a keen volunteer for a number of organizations, including Meals on Wheels and the Ottawa Heart Institute. Somehow, he also found the time to teach himself how to build and maintain websites. In addition to building the HSO’s website, he worked on websites for the Ottawa Public Education Retirees Association, the Somerset Community Police Centre, the Ottawa Smockers’ Guild, and the Bethany Hope Centre.

John is also an inveterate walker, and has been since the first oil crisis of 1973. Looking for a way of reducing his energy consumption beyond the usual things like turning off lights and turning down the thermostat, he took up walking to and from work each day, rain or shine. This was not a trivial initiative, living as he did some four and half miles from his school. Think of doing that in a winter snow storm, or an autumn gale. As John wryly put, “Gene Kelly was a fraud,” referring to the Hollywood star dancing in the Hollywood classic Singing in the Rain. When he and his wife decided to give up suburban life to move downtown, his walk to school became seven miles each way! This necessitated him getting out the door by 4 am to be at work on time, with a midway stop at Tim Horton’s for a restorative bagel and coffee. Luckily for the Historical Society, he developed a keen appreciation for Ottawa, its neighbourhoods and its history on his walks to and from work.

Last year, John let us know that the Society should begin to think of replacing him. He noted that it was never a good idea for an organization to become dependent on one individual. And, while he was healthy, at age 76 he was no longer a “spring chicken.” Should he become unavailable for some reason, the Society could be severely disrupted. Prophetic words as it turned out.

Work began in the summer of 2019 on the daunting task of replacing John. As he used software that was not transferable to the Society, replacing him required the Society to move its website to a new platform. After investigating a number of alternatives, and realizing the extent of the job, the Society sought outside assistance. In late 2019, Vince and Cindy Murphy, who operate a small web design firm called ProbaseWeb from their home in Kemptville, Ontario, began the task of “migrating” our website to its new home. This will be the subject of a forthcoming HSO article.

In January 2020, John Reeder, the confirmed walker, slipped on the ice while passing through the courtyard at the city hall. It was a nasty break which required a number of pins and a plate. To add insult to injury, the break didn’t heal properly, requiring John to have to have a second operation in February. As a consequence, he and his wife were sadly unable to attend the HSO luncheon at the former All Saints’ Church in Sandy Hill. We had hoped to honour John and his incredible contribution to the Society over the years at the event.

Despite being one-handed and making frequent visits to the hospital and doctor, John continued to update our website, making his last changes in late February, just over thirteen years from when the site went live in 2007. Fortunately for the Society, work on the new website was almost complete. With the website management team, trained and in place, we were collectively able to assume John’s former responsibilities for maintaining and updating the new website in an almost seamless fashion.

Thank you, John, for all you did for us over the years. You will be missed. But your website legacy lives on. Good luck on your future endeavours.