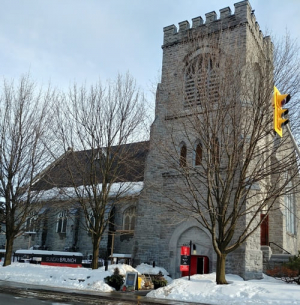 The HSO was blessed with exceptionally good weather for this event as the Society Members and other attendees arrived, registered and chose their seats in “Borden Hall” (in its previous incarnation, the church’s “nave” or main area). The dining area, its pews long since repurposed elsewhere and replaced by tables and chairs, was copiously illuminated by the sunlight shining through the hall’s many tall stained glass windows. A sumptuous buffet of sandwiches and soup, accompanied by a beverage service, provided no small attraction in itself, and the excellent lunch contributed towards an upbeat and relaxed atmosphere as those present settled in.

At 12:30, Ottawa composer, guitarist and admitted local history buff Paul Weber took to the stage, introducing and playing the first Ottawa song he wrote, “The Great Fire (1870)”, about the conflagration that levelled much of the Ottawa Valley East of Arnprior and North of Smiths Falls up to Bell’s Corners, narrowly sparing Ottawa proper. He followed this with “The Heron Road Bridge” about Ottawa’s worst construction accident, the August 1966 collapse that cost nine construction workers their lives. 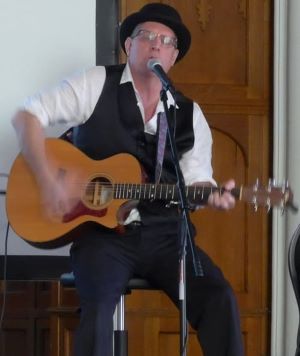 Paul Weber - Musician, Songs of OttawaAfter Paul’s first set, HSO Events Coordinator Ben Weiss thanked him and then gave a brief overview of All Saints Church, from its genesis as a gift from Henry Newell Bate (later Sir) to the community through its many years of service to an array of prime ministers, other notables, and parishioners in general. Ben then addressed the HSO Speakers Series, mentioning both Rawlson King’s recent talk and the upcoming topics featuring Ottawa’s Francophone community and founders.

The first of two door prize draws followed, after which Paul Weber continued his serenade. His second set began with a song about Ottawa’s “First Train (1854), followed by his “Ode to Gerry Barber” about an infamous beefy bouncer at “The Chaud” (the Anglo name for Chaudière Club in Aylmer, QC) and a song on the construction of the “Rideau Canal”. He next sang “Je suis né dans un mille carré”, referencing “l’Ordre Jacques Cartier”, a Francophone Secret Society of the 1960s advocating for French-language services and closed with “We got…”, a humorous song about Ottawa’s many (if debatable) attractions.

Ben Weiss then thanked Paul for his music, presenting him with an honorary HSO membership, and then introduced HSO Member and Sandy Hill Resident François Bregha as the next speaker. 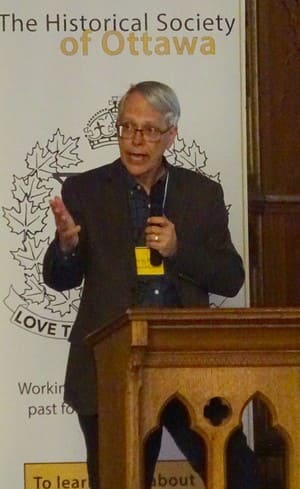 François Bregha (who spoke last October 9 on Prime Ministers’ Sandy Hill homes), began his presentation with the history of All Saints Church, dedicated in 1900 by the Earl of Minto (then Governor General) in a grand ceremony attended by dignitaries including the Duke of Connaught, parishioners and the public. He spoke also to the several additions and donations made to the church and community over the years by the Bate family, notably, Sir Henry and his brothers (see HSO pamphlets 91 through 93), whose Trennick House home once occupied an entire Sandy Hill block.

All Saints Church, over its earlier life, hosted a wide variety of services and events, beyond its regular services, among which were a large Sunday School and later daycare services for the community and, in 1924, on “an ideal Canadian winter day”, Canada’s only Royal Wedding at which Prince Erik of Denmark married J. R. Booth’s granddaughter Lois. The wedding drew a huge crowd, estimated at over 10,000 souls, among them four Prime ministers, past, sitting and yet to be. A more somber event at All Saints followed in June 1937, with the state funeral of Sir Robert Borden, Sandy Hill resident and parishioner of long standing and Canadian Prime Minister for a decade that spanned the First World War. After a small private service at Sir Robert’s residence on Wurtemburg Street, the funeral cortège proceeded to All Saints church, the streets lined with mourners including over a thousand veterans. After the service, the cortège reassembled and continued on to Beechwood Cemetery for the interment. 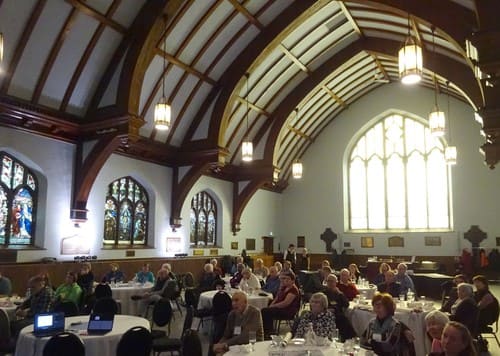 François then addressed six notable Ottawans whose contributions were memorialized in plaques on the church walls. First, on the north wall, was a tribute to Canon G. P. Woollcombe, a founder of Ashbury College and survivor of the torpedoed ocean liner “Athenia”. On the West wall, a second plaque commemorates Frederick Toller, Comptroller of Dominion Currency. Among the plaques on the south wall are one in memory of Sir George H. Perley, businessman, cabinet minister and philanthropist, and Archdeacon C. G. Hepburn, whose contributions included notable wartime chaplaincy.

The South wall also bears a plaque commemorating James W. Woods, who developed an especially waterproof make of canvas that won his outfitting company major supply contracts with the British Army for WWI, continuing to innovate and grow his company and product line to the point where he could sponsor major expeditions such as Amundsen’s and where author Ernest Hemingway would mention one of his sleeping bags by name in For Whom the Bell Tolls. Finally, the same wall commemorated David Finnie, long-time manager of the Bank of Ottawa, before its 1920 merger with the Bank of Nova Scotia.

After a brief question period, Ben Weiss thanked François, completed the draw for door prizes and introduced the next speaker, Leanne Moussa, the Founder and President of All Saints Development Inc. which owns and manages the All Saints Event Space.

Leanne Moussa began her presentation by outlining her personal involvement with the All Saints Church over time and the Bettye Hyde daycare center that operated there for forty years. 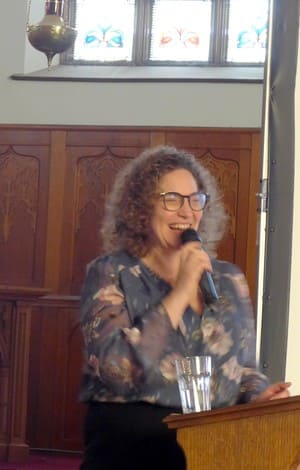 Leanne Moussa - President and Founder, All Saints Event Space However, she recognized that church’s impact extended beyond the immediate community and that it had become a “national legacy”. Its importance notwithstanding, the dramatic decline in parishioners over recent decades and the growing need for substantial maintenance had made it a perplexing financial issue for the Diocese so, after years of study, it was listed for sale in 2014.

Leanne was instrumental in forming a “Save the Saints” working group to generate ideas for the “adaptive reuse” of the facility. This initiative was complemented by a plan to recognize a “Prime Ministers’ Row” in Sandy Hill and a corporation formed with a view to purchasing the church and operating facilities there with priorities asset by “Save the Saints”. In time, sufficient funds were identified to cover the down payment and on December18, 2018, the purchase took place, with the Anglican Diocese of Ottawa as the mortgage holder.

With both new services and much-needed maintenance to prioritize, the process of ongoing management required a specialized development approach, namely : “How can we build a business model that makes financial sense and that still gives our community what they want?” Priorities had to include maintaining the facility as some form of public space, preserving the history of the building, and making it a place for all the community rather than just an enclave of gentrification.

Leanne outlined several of the initiatives in this area, such as a successful new restaurant facility, building repairs and renovations (notably heating and air conditioning), and the disposition of artifacts such as the church pews, two of which are now – quite appropriately – among the holdings of the Canadian Museum of History.

After several questions, Ben Weiss thanked Leanne for all her efforts and presented her with an honorary membership in the Society. The formal luncheon then adjourned and members proceeded home or to explore further the All Saints Event Space.

Ian Browness and Cynthia Coristine researched and wrote a series of Bytown Pamphlets titled The Bate Brothers of Ottawa.

Please see our Pamphlets Available for Sale to purchase Booklet 1 and 2. Booklet 3 is not currently available.