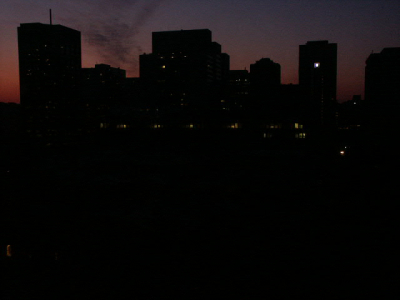 It was a typical mid-August summer day in the nation’s capital—hot and muggy. Earlier that Thursday, the thermometer had topped 31 degrees Celsius. By mid-afternoon, the usual early rush hour of public servants was in full swing, with cars pouring out of the city, many heading north towards cottage country in the Gatineau hills to get some relief from the heat and humidity. But the evening was going to be anything but normal. Without warning at 4:11pm, street lights failed, air conditioners stopped, and computers went dark across Ottawa.

It took a while for the enormity of the situation to be fully appreciated. Electric power had failed across eight U.S. states and much of Ontario, reminiscent of the blackout that had plunged much of the U.S. North Eastern seaboard and Ontario into darkness in 1965. In the course of a few minutes, some one hundred electrical generating plants, including 22 nuclear power plants, shut down. More than 50 million people were left without power living in an area of roughly 24,000 square kilometres.

Less than two years following the 9/11 attacks in the United States, people’s first thoughts were of terrorism. While this possibility was quickly ruled out, politicians on both sides of the international border were quick to lay blame on others. Prime Minister Chrétien’s office suggested that a lightening strike at an upstate New York power station was responsible for the cascading failure across the international electrical grid. New York power authorities denied this, claiming that the problem originated outside of the United States, i.e. Canada. New York Governor Pataki also pointed the finger at Canada, while Canadian Defence Minister John McCallum blamed a failure at a Pennsylvania nuclear power plan. None were right.

The following year, the inelegantly named U.S.-Canada Power System Outage Task Force concluded that the cascading failure originated in Ohio. High temperatures and a corresponding high demand for power had caused overloaded transmission wires to heat up and sag, touching unpruned trees. This in turn caused a generating plant in Eastlake, Ohio to shut down, putting an intolerable strain onto other transmission lines, which in turn tripped breakers shutting down power elsewhere as successive plants were overloaded. The outage could have been easily managed and the resulting blackout contained locally had there not been a computer software bug in the alarm system at FirstEnergy Corporation, the responsible Ohio-based power authority, that did not go off in time to warn system operators.

While the immediate cause of the blackout was high tension wires touching trees in Ohio, the Task Force highlighted a number of systemic failures which contributed to the power grid failure. Importantly, the Task Force identified shortcomings at FirstEnergy Corporation. These included a lack of understanding about the deteriorating conditions of its system, and a failure to maintain adequately its transmission right-of-ways. A number of minor violations of existing regulations were also noted. More generally, the Task Force concluded that the North American Electric Reliability Corporation (NERC), the not-for-profit agency tasked with overseeing North American power production, did not have the authority to develop or require compliance of strong reliability standards by member utilities. In the absence of such reliability standards, no financial penalty was levied on FirstEnergy for the power blackout.

Back in Ottawa, life carried on more or less as normal that evening. With street lights dead, all intersections became four-way stops. Rush-hour traffic moved, albeit slowly, with gridlock avoided in some cases by pedestrians who took over traffic control. Despite the muggy heat and fraying tempers, the commute home was described as “surprisingly civil” by a police official. Long delays in OC Transpo service led bus riders to hoof it; many receiving rides from passing private cars. With all flights at the MacDonald-Cartier International airport grounded, stranded passengers either dossed down at the terminal or found rooms in nearby hotels.

There were some also serious problems that night. There were apparently 22 cases of looting in the city, as well as an armed robbery at a Sparks Street jewellery store. There were also three fires, one of which claimed the life of a teenaged boy. Restaurants were also negatively affected by the loss of refrigeration; some gave away melting ice cream to passersby. On the upside, the blackout provided the perfect excuse for impromptu street parties. As well, the clear sky that night was a great opportunity to view the stars, undimmed by light pollution—as long as you looked south. The lights of Hull and Gatineau remained on as Quebec’s power grid was unaffected by the black-out. They provided a surreal backdrop to Mayor Bob Chiarelli’s televised address to the city in offices in front of Parliament Hill to explain why the city was in darkness.

By the next morning, the lights began to slowly come back on. The state of emergency announced the previous night by Ontario’s premier, Ernie Eaves, was eased. Within 24-48 hours, power had been largely restored. But the system remained unstable and unbalanced; you can’t restart power plants with a flip of a switch. Government offices and many businesses remained closed for up to week before the situation returned to normal. Besides holidays for unessential staff, the blackout provided a perfect test of backup systems that had been established following the September 2001 terrorist attacks. In total, it is estimated that the blackout cost Ontario 18.9 million in lost employment hours, with manufacturing shipments falling $2.3 billion.

Could it happen again? On the positive side, there have been major improvements to the reliability of the international grid since 2003. Significant investments have been made on both sides of the border which have made the grid more robust. As well, the NERC has established and now enforces reliability standards with electricity producers, and has the power to levy significant fines in the event of non-compliance. Grid operators also employ simulators to model a wide range of possible scenarios, and how to respond to various catastrophic situations. The development of smart grids and distributed power production by lots of small producers may have also reduced the risk of major blackouts. However, it is impossible to plan for all eventualities. Human error, computer viruses and terrorism remain risks. So, keep that flashlight handy.