Milestones in the History of the Historical Society of Ottawa

September 26. The renamed “Bytown Museum” moves to the Commissariat building beside the Ottawa Locks.

February 25. Men are accepted as full members and the organization is renamed “The Historical Society of Ottawa.”

August 14. Governor General Roland Michener unveils the statue of Lieut.-Col. John By, the city’s founder, in Major’s Hill Park. The project to build the statue was an important undertaking of the Society.

June 3. The Society celebrates its centennial.

June 13. The Society votes to transfer the Bytown Museum and its 7,836 artifacts to the current organization that is operating it.

The Society transfers those artifacts in its collection that the Bytown Museum did not wish to keep to the City of Ottawa Archives.

“To Be Continued…A Short History of the Historical Society of Ottawa” is published.

(Drawn from Mullington, Dave, 2013. “To Be Continued…A Short History of the Historical Society of Ottawa,” HSO Publication No. 88.) 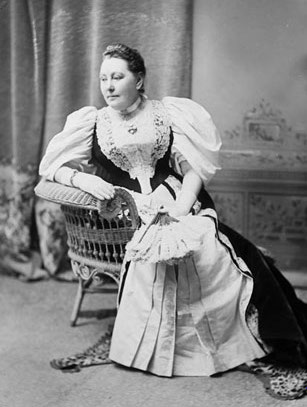 Lady Matilda Edgar, née Ridout, (1844-1910), wife of Sir James Edgar, Speaker of the House of Commons, chaired the inaugural meeting of the Women's Canadian Historical Society of Ottawa in 1898. Library and Archive Canada, PA-025868On June 3, 1898, thirty-one Ottawa women, united by a desire to preserve and conserve Canada’s historical heritage, assembled in the drawing room of the Speaker of the House of Commons located in the old Centre Block on Parliament Hill. Chairing the meeting was the prominent author and early feminist Lady Matilda Edgar (née Ridout) wife of Sir James Edgar, the Speaker. The cream of Ottawa society attended the meeting, including Lady Zoë Laurier, the wife of the then Liberal Prime Minister Sir Wilfrid Laurier, Mrs Adeline Foster, the wife of the prominent Conservative politician Mr (later Sir) George Eulas Foster, and Mrs Margaret Ahearn, the spouse of Mr Thomas Ahearn, the famous Ottawa-born inventor and businessman. The ladies agreed to form the Women’s Canadian Historical Society of Ottawa. As reported by the Ottawa Journal, they hoped “to resurrect from oblivion things of interest to every patriot Canadian woman, and preserve such things that are already treasures.”

Under its original 1898 Constitution, the objective of the Society was to encourage “the study of Canadian History and Literature, the collection and preservation of Canadian historical records and relics, and the fostering of Canadian loyalty and patriotism.” The Constitution also stressed that “neither political parties nor religious denominations” would be recognized. Adeline Foster was elected as the Society’s first president. Lady Aberdeen (née Ishbel Maria Marjoribanks), the wife of the Governor General, consented to be the Society’s patron, thereby establishing a link to Rideau Hall that continues to this very day. The annual membership fee was set at fifty cents. Initially, the Society was a women-only organization, though men sometimes participated as honorary members. This situation continued until 1955, when men were allowed to join the Society as full members. 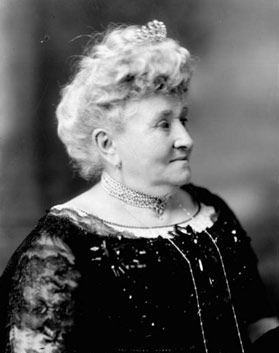 Lady Zoé Laurier, née Lafontaine, (1841-1921), wife of Sir Wilfrid Laurier, Prime Minister of Canada, was a founding member of the Women's Canadian Historical Society of Ottawa in 1898. Library and Archives Canada, PA-028100During the early years of the Society’s history, particular attention was paid to the collection and preservation of important artifacts and historical documents. The Society put on its first exhibition of historical objects in 1899. This collection, which was to expand greatly over the coming decades, went on permanent display with the opening in 1917 of the Bytown Historical Museum, located in the old Registry Office on Nicholas Street. The museum was staffed and operated by Society volunteers. Other activities included regular lectures and the publication of historical research. The Society was also instrumental in the erection of the statue of the French explorer Samuel de Champlain at Nepean Point in 1915. To celebrate Ottawa’s centenary in 1926, the Society unveiled a memorial to Lieutenant-Colonel John By, the Royal Engineer responsible for the construction of the Rideau Canal, and the founder of Bytown. A replica of his house, which had been destroyed by fire years earlier, was also built at Major’s Hill Park. 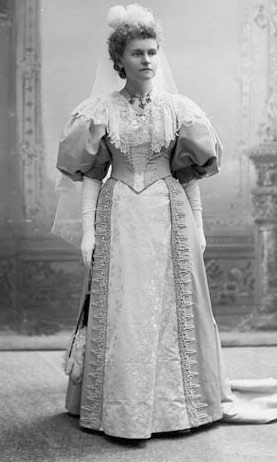 Mrs Adeline Foster, née Chisholm, (1844-1919), wife of Mr (later Sir) George Eulas Foster, Conservative politician, first president of the Women's Canadian Historical Society of Ottawa. Library and Archives Canada, Mikan No. 3423435During the lean years of the Great Depression, the Society was forced to tailor its activities to suit the straitened financial circumstances. Its publications were cut back, and a ten cent fee began to be charged for museum entry. In 1930, the annual membership fee was also increased to one dollar. Notwithstanding the difficult economic situation, the Society continued to flourish. Its collection of historical artifacts and books expanded. Meetings, historical outings, and presentations were held regularly. In 1937, the Society was officially incorporated by the Province of Ontario. With the outbreak of World War II, Society activity slowed to allow members more time to support the war effort. The museum was closed for the duration. Nonetheless, membership meetings continued to be held, and the Society’s collection of antiquities grew through donation. Members also raised money for deserving wartime causes. 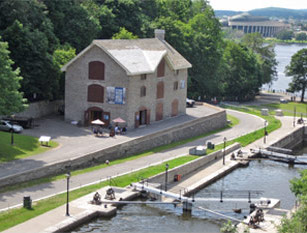 The Bytown Museum, formerly the Commissariat building, was built in 1827 and is the oldest stone building in OttawaFollowing the conclusion of the war, Society activities picked up. Particular attention was paid to finding a new home for the organization’s growing collection of historical artifacts and books; the old Registry Building was no longer adequate. In 1951, the Society leased premises from the federal government for a nominal fee in the Commissariat building adjacent to the Rideau Canal locks. The building, the oldest stone structure in Ottawa, was built by Scottish stonemasons hired by Colonel By during the construction of the Rideau Canal during the 1820s. Unfortunately, it was in a poor state of repairs; the building’s restoration and renovation occupied a considerable portion of the Society’s time, effort, and resources over coming years.

In 1955, there was a dramatic shift in the life of the Society. After vigorous debate, men were permitted to become full members of the Society in order to build a broader and stronger organization. The following year, the Society’s new name—the Historical Society of Ottawa—was officially adopted to reflect that change. Mr H. Townley Douglas, who had been previously active as an honorary member was elected as the Society’s first male director.

In Major's Hill Park stands the statue of Col. John By, Royal Engineers, who was responsible for building the Rideau Canal and the founding of Bytown, later renamed OttawaWhile the Bytown museum remained at the centre of the Society’s activities, the 1960s, under the leadership of Dr Bertram McKay, saw the HSO working hard for the erection of a statue in honour of Colonel By. Although Ottawa’s mayor at the time, Dr Charlotte Whitton, and City Council were supportive, it was up to the Historical Society to come up with the necessary funds. Raising $36,500 by 1969 (equivalent to more than $233,000 in today’s money), the Society hired the Quebec-born sculptor Joseph-Émile Brunet. On August 14, 1971, Governor General Roland Michener unveiled the bronze statue of Colonel By in Major’s Hill Park. Fittingly, the statue overlooked the Rideau Canal, itself a lasting memorial to the Colonel’s engineering abilities.

In 1981, the Society took a new step in its effort to increase public awareness of Ottawa and the Ottawa Valley’s rich history with the launch of a pamphlet series dedicated to that purpose. Its first publication was titled John Burrows and Others on the Rideau Waterway by a former Society president Charles Surtees. The pamphlet series continues to be an important feature of the Society’s efforts to increase public awareness about the history of Ottawa.
Through the 1980s and 1990s, the museum became an increasing preoccupation and concern for Society members. Forced to relocate temporarily due to restoration work conducted by the federal government at the Commissariat building and Rideau locks, attendance plummeted. Even when the Bytown Museum reopened at the Commissariat Building, the number of visitors was subsequently adversely affected by the reconstruction of Plaza Bridge. Declining membership, fewer volunteers, and rising costs owing to inflation also strained the Society’s ability to sustain the Museum in the manner it deserved. After considerable soul searching and debate, the difficult decision was made in 2003 to transfer the Bytown Museum to a separate not-for-profit organization. Roughly half of the artifacts and rare books collected over more than a century were loaned to the Museum; the loan became a permanent gift two years later. Considerable funds were also transferred to the new Museum Board to help launch the new organization.

Although now legally separate from the Historical Society of Ottawa, the Museum and the Society continue to cooperate closely. Over the following years, the Society transferred its remaining collection of items to other heritage organizations, most importantly the City of Ottawa Archives. A large collection of military medals was also offered to Canadian museums. Those medals that could not be placed were subsequently sold. In 2011, the proceeds of the sale helped to launch the Historical Society of Ottawa’s Research and Development Fund to support research into Ottawa’s history.

In 2013, the Society reviewed and approved revised “purposes and objectives” (Article 2 of its Constitution) in light of the many changes to the organization in recent years. Remaining true to the spirit of its founding members, the Society remains focused on increasing public awareness and knowledge of the history of Ottawa, the surrounding region, and their peoples. In cooperation with other heritage organizations, it also works to conserve archival materials, supports and encourages heritage conservation, and preserves the memory of Colonel By.