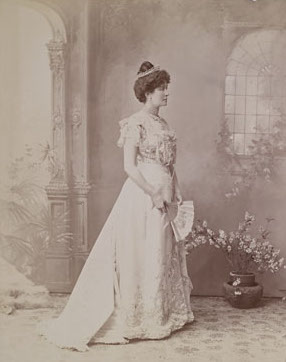 Lady Minto
Topley Studio, Library and Archives Canada, 3810248Since the founding of what was then called the Women’s Canadian Historical Society of Ottawa in 1898, the Society has always had a close relationship with Rideau Hall There is a belief that Lady Aberdeen, the wife of the 7th Earl of Aberdeen who was Canada’s Governor General from 1893 to1898, was the Society’s first patron. However, while we know that she took a close interest in the fledgling organization, her patronage was likely unofficial as she and her husband returned to Britain just a few days after the first regular meeting of the Society.

For certain, Lady Minto, the wife of the 4th Earl of Minto who succeeded Lord Aberdeen, consented to become the patron of the Society in February 1899. For more than fifty years, the wives of succeeding Governors General continued this practice. In more recent decades, Governors General themselves have fulfilled this role. In October 2018, Her Excellency, the Right Honourable Julie Payette consented to be our patron, continuing a tradition of more than a hundred and twenty years of vice-regal patronage.