At the 2019 Annual General Meeting held in July 2020, members agreed to release a portion of the funds held in the Research and Development Fund and the Col. By Gravesite Maintenance Funds (in total, approximately $30,000) to support community projects over the next few years. In response, and at the request of the membership, your Board of Directors has developed a process and a set of criteria which will be used to select community projects going forward. These criteria include relevance to the HSO’s mandate, cost, and the availability of volunteers to carry the project through to completion. The Society might also consider working with other heritage organizations on a project as a way of leveraging its resources.

The Board eagerly awaits the suggestions and the support of HSO members in this new, and exciting chapter in the life of our Society. 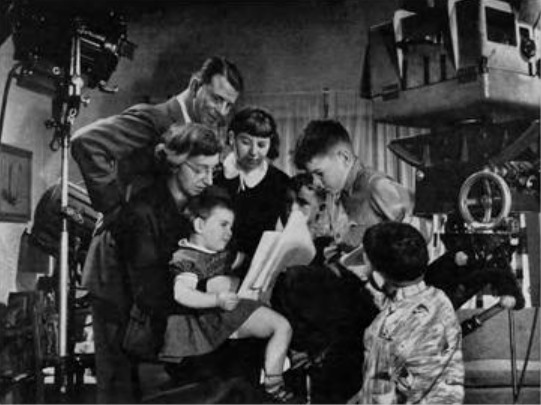 Judith and "Budge" Crawley and family, circa 1950. Source: Wikipedia.Following the 2017 presentation by George Shirreff on the contribution of Frank “Budge” and Judith Crawley into making Ottawa a centre for producing world-class films during the mid-twentieth century, the Society decided that it would install a bilingual plaque at 19 Fairmont Avenue in Hintonburg, the headquarters of Crawley Films, in honour of the Crawley family. Discussions have been held with the Crawley family, the current occupants of the building, and the City of Ottawa. Delayed in part owing to the COVID-19 emergency, we hope to dedicate the plaque in 2021.