In the pantheon of Canadian heroes stands a young, twenty-one year old man from British Columbia named Terry Fox. Fox, who had lost his right leg to cancer, inspired millions with his attempt in 1980 to run across Canada, from the Atlantic shore of Newfoundland to the Pacific coast of British Columbia, to raise funds for cancer research. Starting his journey in relative obscurity, Fox’s initial goal was to raise $1 million through his Marathon of Hope. But as the word began to spread about his journey, the entire country got behind him enabling him to increase his goal first to $10 million, and then to $24 million ($60 million in today’s money), or $1 for every Canadian.

With a distinctive hopping gait as he compensated for the limitations of his prosthetic limb, Fox ran close to a marathon every day. Weather, traffic, fatigue, blisters, equipment failure, and nagging thigh pain did not deter him. Only the return of his cancer which had metastasized to his lungs stopped him halfway from his goal, after he had run 5,373 kilometres (3,339 miles) in 143 days from St John’s, Newfoundland to just outside Thunder Bay, Ontario. Despite enduring further bouts of chemotherapy, Fox succumbed to the disease roughly nine months later. But his courage and self-sacrifice has had a lasting impact on people everywhere. School, roads, sports fields and even a mountain have been named after him to honour his memory. Each year, Terry Fox runs are held around the world to raise funds for cancer research. To date, more than $650 million has been raised worldwide by the Terry Fox Foundation. Thanks in part to these funds, considerable progress has been made in the war against cancer since Fox’s day. Indeed, osteosarcoma, the cancer which ultimately killed the young man, is now highly treatable, with a cure rate of 80 per cent. As well, most victims, typically young people, no longer face the pain and trauma of amputation.

Terry Fox’s story began in the fall of 1976 when he was in a traffic accident near his home town of Port Coquitlam, British Columbia. Fox seemingly hurt his right knee in the incident. But the pain persisted. In March 1977, X-rays and other tests confirmed the worst—cancer. In an effort to halt the spread of the disease, doctors amputated the leg six inches above the knee. Within weeks of the surgery, he was relearning to walk using a prosthetic limb. While undergoing follow-up chemotherapy, Fox, an avid athlete, joined the Canadian Wheelchair Sports Association basketball team, and help the team win three national championships.

Inspired by a story of an amputee runner in the New York City Marathon, Fox decided to run across Canada to raise funds for cancer research. Through 1979, he trained daily with weights to increase his upper-body strength. He also begun to run, just a half mile at the beginning. But by the fall he had built up his endurance sufficiently to run his first marathon in Prince George, British Columbia. Although he finished in last place, he crossed the finishing line to the cheers and applause of other contestants. Encouraged by his progress, he contacted the Canadian Cancer Society regarding his intentions for a cross-country run, and to get its support. Friends and family raised $3,000 though garage sales and dances to help fund his journey. Fox also approached corporations for financial assistance. Touched by his request, Ford Motors provided a van, Imperial Oil, the gasoline, Adidas, his running shoes, and Safeway, food coupons, redeemable in its stores.

On 12 April 1980, Fox dipped his artificial leg in the water of St. John’s harbour and commenced his Marathon of Hope. He hoped to reach the west coast by the following November. Accompanying him on his journey was his good friend Doug Alward who drove the van a short distance ahead of Fox, carrying supplies, including three spare legs and various parts. They were later joined by Fox’s younger brother Darryl. The early going was tough. Bad weather, including snow and heavy rain, hampered the run. Often, the boys were disappointed by poor receptions as they travelled through towns on their route, owing to a lack of publicity for the Marathon of Hope. While the run through the St Lawrence Valley of Quebec was beautiful, their inability to speak French hampered communication; they apparently went five days without showers. Traffic on the trans-Canada highway was another issue until the Quebec police gave them an escort. Happily, things markedly improved on their arrival in Montreal. There, they were greeted by Isadore Sharp, the CEO of the Four Seasons Hotel chain. Sharp, who had lost a son to cancer in 1978, took the young men under his wing, putting them up in his Montreal hotel. In addition to sponsoring the marathon, Sharp challenged other businesses to do likewise, an act which hugely raised their national profile. 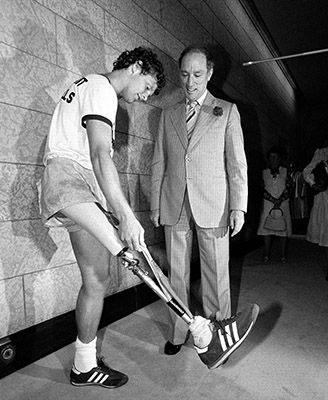 Terry Fox in Ottawa meeting with Prime Minister Pierre Trudeau, July 1980. Photo: Rod MacIvor/Ottawa.Fox jogged into Ottawa on 30 June, 1980 to a hero’s welcome. At 11am, the young runner was received by Governor General Ed Schreyer at Rideau Hall. Still dressed in his sweaty, running clothes, the athlete, accompanied by his two t-shirted companions, drank orange juice, and lemonade out of champagne glasses in a grand reception room. He later spoke to a large crowd of supporters on the Sparks Street Mall who gave him a boisterous welcome. Jean Luc Pepin, the federal minister of transport, released a thousand helium balloons from the roof of Ottawa’s Four Seasons Hotel; each balloon advertised Fox’s Marathon of Hope. That night Fox dined with Ron Foxx, an outside linebacker for the Ottawa Rough Riders, as well as volunteers from the Ottawa branch of the Cancer Society.

The next day, Fox was honoured at the Canada Day football game between the Ottawa Rough Riders and their western arch-rivals, the Saskatchewan Roughriders. Despite some initial trepidation, he took the ceremonial opening kick-off, receiving a standing ovation from 16,705 Ottawa fans. Tony Gabriel, Ottawa’s star running back, gave Fox a football autographed by the whole team. Agreeing that he was “one tough kid,” Gabriel commented that there wasn’t a single player among them that could do what Fox was doing. Moved by his spirit, Gabriel hoped that Fox would achieve his dream, and was honoured to have had the opportunity to meet the courageous runner. Fox was later introduced to Prime Minister Trudeau, though the meeting was a bit awkward as the prime minister had not been properly briefed.

Following his rapturous greeting in Ottawa, Fox was a national celebrity. Concerns about publicity melted away, and funds in support of his marathon began to pour in. Amounting to about $300,000 when he entered the nation’s capital at the end of June, pledges soared as he made his way to Toronto and through southern Ontario. By mid-August, $11.4 million had been raised for cancer research with more coming in each day.

But by the end of August, it was apparent that something was wrong; Fox had seemingly caught a bad cold. On 1 September, despite suffering from a hacking cough and chest pains, he resumed his run, unwilling to disappoint cheering fans who turned out to welcome him into Thunder Bay. Eighteen miles outside of town, he was forced to halt. Taken to hospital, doctors confirmed the worst; his cancer had returned. The next day, Fox and his parents held a press conference to announce the news, and that the Marathon of Hope would have to be suspended. The young runner returned to British Columbia to undergo more treatment. 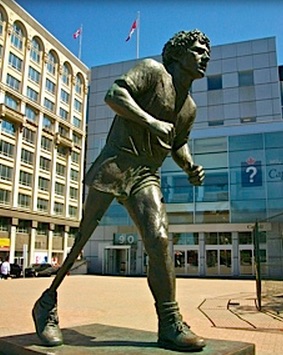 News of Fox’s relapse stunned the country. Tens of thousands of letters of support poured into the hospital from across Canada, and around the world. Many came from young children. The CTV television network organized a nationwide, five-hour televised tribute to Terry Fox, raising more than $10 million for his cause. Celebrity singers, included Anne Murray, John Denver, Glen Campbell, Elton John, and Nana Mouskouri. Ballet dancers, Karen Kain and Frank Augustyn, performed a dance from Romeo and Juliet on the broadcast. By February 1981, Fox’s Marathon of Hope had reached its goal of $24 million. Fox received many honours for his courage and self-sacrifice. Governor General Ed Schreyer flew out to British Columbia in September 1980 to make him the youngest ever Companion of the Order of Canada. Fox was also awarded the Order of the Dogwood by British Columbia’s Premier, Bill Bennett, and the Lou Marsh trophy for Canada’s top sportsman of 1980. Canadian Press named him Canada’s newsmaker of the year for 1980; an accolade which he again received in 1981 posthumously. With his family at his bedside,

Terry Fox passed away on 28 June 1981. He was later buried in his home town of Port Coquitlam. At a memorial service held on Parliament Hill attended by more than 8,000 people, Prime Minister Trudeau tearfully praised Fox saying that his “selfless generosity” “elevated him above the merely courageous to the exceedingly thin ranks of the truly heroic.” The Prime Minister called the Marathon of Hope “a gift of the spirit, and act of love for mankind.” On the twenty-five anniversary of the Marathon of Hope, the Royal Canadian Mint issued a special commemorative dollar coin. A statue of Terry Fox stands on Wellington Street across from the Parliament Buildings. In 2015, the Canadian Museum of History in Gatineau exhibited memorabilia from Fox’s marathon, including a jug of Atlantic Ocean water that Fox had wanted to pour into the Pacific, as well as two prosthetic legs, his camper, and scans of some 60,000 cards and letters well-wishers had sent him.