A Caring and Daring Bytown Pioneer 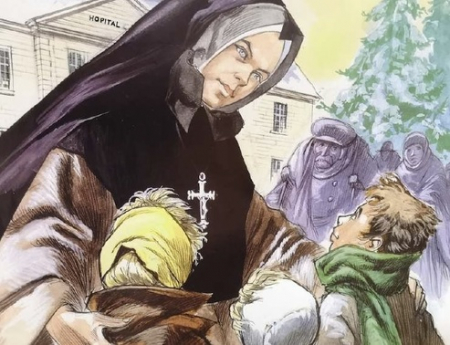 A painting symbolizing Sister Élisabeth Bruyère’s devotion to taking care of Bytown’s sick, its orphaned children and its older residents. The image was on display on Feb. 25, 2020, at the Bruyère Hospital in Lowertown, where Ottawa Mayor Jim Watson declared Mother Élisabeth Bruyère Day to mark the 175th anniversary of her 1845 arrival in Bytown, the future Ottawa.

Within three months of their arrival in rugged Bytown, Mother Bruyère and her group had founded a school, a general hospital, a home for the aged and an orphanage; and within another two years Mother Bruyère and the sisters would defy the risk of deadly contagion and tend to the sick as Bytown found itself in the midst of a severe typhus epidemic.

Mother Élisabeth Bruyère was a woman with a caring and compassionate heart and of daring faith. She founded the first congregation of religious women in the Archdiocese of Ottawa, the Sisters of Charity of Ottawa (also called Grey Nuns of the Cross until 1968).

Élisabeth Bruyère was born in L’Assomption, Que., on March 19, 1918. Her father died when she was six years old. She spent her childhood in Montreal where her mother became a household servant to earn a living for her family. Élisabeth was educated by the Sisters of the Congregation of Notre Dame.

In 1839, Élisabeth, attracted by Saint Marguerite d’Youville’s charisma, entered the Congregation of the Grey Nuns of Montreal. In 1841, she pronounced her vows of religion; for the next four years, she was given the responsibility of educating 40 young orphan girls.

Her remarkable qualities were admired by her Superiors who chose her as the founding Superior of the mission in Bytown.

Arrival in Bytown: Founder by the Will of God

Astonished to receive this assignment, Sister Élisabeth Bruyère saw in this nomination the expression of God’s will. On February 19, 1845, she left with three professed Sisters, 1 postulant and 1 aspirant. On February 20, 1845, they arrived in Bytown where the caring and daring Bytown pioneer’s mission of love, service and compassion began.

Grace nurtured faith which led Mother Bruyère to seek God’s will. Her unconditional trust in Divine Providence opened her hands to all those in need. Pain never failed to resonate in Mother Bruyère’s caring heart as she reached out to everyone the Lord placed on her path.

Mother Bruyère’s daring faith never failed her. The Sisters’ accomplishments went far beyond the imaginable, given their meagre resources. Barely 3 months after the Sisters’ arrival, the first bilingual school in Eastern Ontario, a General Hospital (today Bruyère Continuing Care), a Home for the Aged, an orphanage and a home for foundlings came into existence.

Mother Bruyère was a woman of heroic charity. During the typhus epidemic of 1847, 17 of the 22 Sisters contracted the disease while caring for the Irish immigrants, but none of them died. The same heroism was manifested during a smallpox epidemic in 1871.

No one wanted to care for the victims; the Sisters secretly set up a “lazaretto” in the convent yard. For over two years, 5 Sisters and 2 aides lived in isolation to care for the contagious patients. 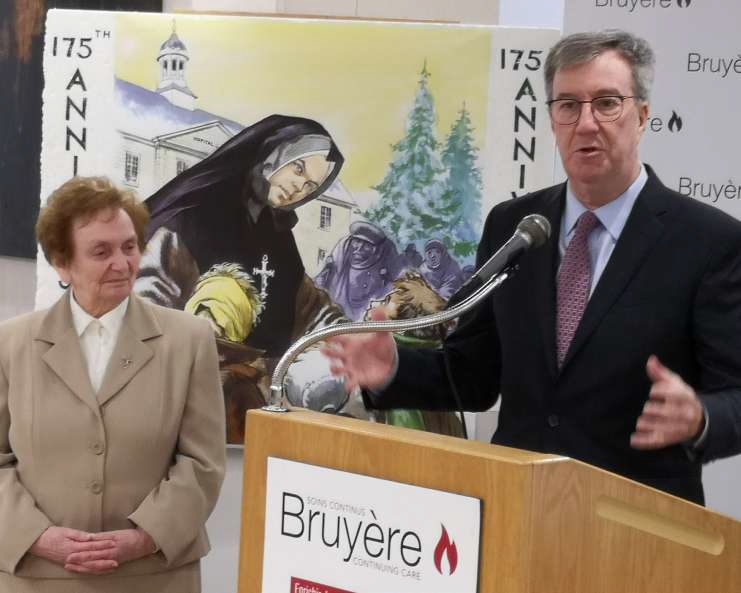 Alongside Sister Rachelle Watier, Superior General of the Sisters of Charity, Ottawa Mayor Jim Watson declares Mother Élisabeth Bruyère Day on February 25, 2020, during a ceremony at the Bruyère Hospital in Lowertown. Bruyère’s arrival in Bytown in 1845 marked the beginning of organized healthcare in the city.Spiritual daughter of Saint Marguerite d’Youville, “Mother of Universal Charity”, Mother Bruyère sowed the seed of this legacy in the hostile soil of Bytown. Incarnating Marguerite d’Youville’s charism of compassion for the poor, she added a new dimension: education, a priority need in Bytown. The Congregation’s distinctive character gradually became evident: on the one hand service to the poor, the forsaken, the suffering; and on the other hand, education adapted to all levels of society and to all human needs.

A Caring and Daring Bytown Pioneer

Mother Bruyère’s pastoral initiatives responded to the urgent needs discerned in Bytown: classes for the children and for mothers, home visits to the poor and the sick, assistance to the dying. During the epidemic, she did not hesitate to bury the dead. She paid close attention to the repentant wayward girls, opened St Raphael’s house for immigrants and regularly visited prisoners. Sensitive to the spiritual needs of the Church and to the social needs of the citizens of Bytown and beyond, she opened new houses, not only in Ontario and Quebec, but also in the U.S. so as to provide schools for the Franco-American population.

For 31 years Mother Bruyère was a witness to the Father’s tender love while also bearing the responsibility for her young Congregation. At the end of her life, she said: “All was blessed by God because all has been accomplished in conformity with His Holy Will.” (Dec 24, 1875). Mother Bruyère entered eternal rest on April 5, 1876; she was 58 years old.

The Sisters of Charity of Ottawa Continue her Mission

The seed planted by Mother Bruyère in Bytown has grown to full stature and the small community of 1845 has extended its branches widely. Faithful to the spirit of their caring and daring Founder, the Sisters of Charity of Ottawa continue her mission, her charism and her spirituality.

They join their charism of compassion to the evangelization mission of the Church, happy to be witnesses of God’s tenderness and messengers of hope and salvation. Daughters of the Church, they go to the peripheries to share the Good News in Canada, the U.S., Lesotho, Republic of South Africa, Malawi, Zambia, Brazil and Japan.

Mother Bruyère’s life was a true quest for God. She entrusted herself fully to the Providence of God, the Eternal Father. The process toward Mother Bruyère’s Canonization opened in 1978. Her entire life of service and of compassion was a function of her faith, hope and love of God. She was found to demonstrate these virtues in a heroic manner. On April 14, 2018, His Holiness, Pope Francis declared the Servant of God, Mother Élisabeth Bruyère, to be Venerable, thereby opening the path to her eventual Beatification and Canonization … in God’s good time. Venerable Mother Élisabeth Bruyère, intercede for us.