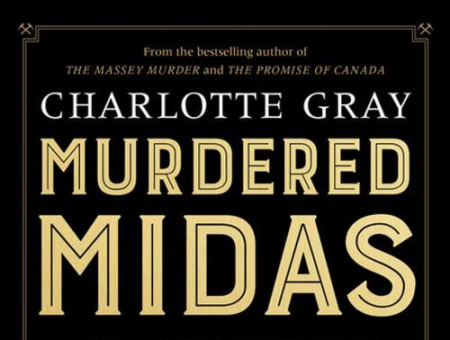 Our March 31st guest speaker shares an interest history’s darker side. Author of nine award-winning books on Canadian history, Charlotte Gray published Murdered Midas: A Millionaire, His Gold Mine, and a Strange Death on an Island Paradise in 2019 to tell the story of the rise to wealth, and the unsolved murder of Sir Harry Oakes.

Harry’s life was not a rags-to-riches story (his father was a lawyer, and Sir Harry studied to be a doctor) but his life became one of adventure (with a bit luck here and there) that lead to his becoming one of the world’s wealthiest men. Harry made some famous and influential friends along the way, but it’s possible that one of these might have been responsible for his brutal death.

Charlotte traveled to such diverse places as the silver mines of Kirkland Lake and the elegant mansions of the Bahamas, in search of details on the life and death of the mining magnate who was considered a generous philanthropist and gentleman to some, and a crude and arrogant monster to others. Which of these is the true version of Sir Harry? You’ll have to watch the video of Charlotte’s presentation to find out how she feels about this Murdered Midas.