Hatpins & Defiance: The Battle in Ottawa against Regulation 17 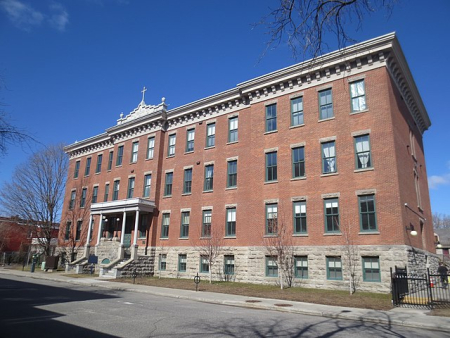 Members and guests who attended the October 2022, in-person, HSO presentation at the Auditorium of the Main Branch of the Ottawa Public Library were treated to a tour de force by Jean-François Lozier, Curator at the Canadian Museum of History. Jean-François told a story that, while familiar to Ottawa’s Francophone community, is mostly unknown in the city’s Anglophone community—the “Battle of the Hatpins” or la battaille des épingles. In this David-Goliath struggle, Francophone parents, in particular mothers, fought the Government of Ontario in 1916 to have their primary-aged children attending the Guigues School taught in French.

Jean-François began his account by providing useful background on the French presence in Ontario, noting that many Francophone families had moved to Ontario during the late 19th century, especially to the eastern part of the province, including Ottawa. While wanting their children to learn the language of the English majority, Francophone also parents desired that French be the language of instruction in “bilingual schools.”

Under the British North American Act of 1867, the provinces were assigned responsibility for education, with the proviso that they provide separate schools for Roman Catholics outside of Quebec, and for Protestants in Quebec. Using its constitutional authority, the Ontario Government, under pressure from those worried about the growing French presence in the Province, introduced Regulation 17 in 1912 which forbade the use of French as the language of instruction beyond Grade 2.

This sparked outrage amongst Ontario’s Francophone community, leading to, among other things, the birth of an Ottawa newspaper Le Droit that committed itself to the struggle for linguistic rights.

Jean-François explained the divisions within Ottawa’s Roman Catholic School Board between its French-speaking and English-speaking members over the issue, and how various schools responded both in Ottawa and in other parts of the Province to Regulation 17—a combination of obedience, non-compliance, and defiance.

The issue came to a head in January 1916 at the Guigues School when parents, mainly mothers, escorted two sisters, Béatrice and Diane Desloges, into the school to teach their children in French. This brought the parents into direct confrontation with the police and the government-appointed school board who were determined to block their entry and their occupation of the school. Jean-François noted that the extent to which the mothers used their hatpins to fend off the police is unclear. News reports said that in the Battle of the Hatpins, one constable had his thumb bitten, while another received a black eye.

In the end, calmer heads prevailed, with the issue going all the way to the Judicial Committee of the Privy Council in London to be settled. While the Privy Council ruled in favour of the Ontario Government in its use of English as the language of instruction in “bilingual schools,” it ruled against the government in its treatment of Ottawa’s French-led, Roman Catholic School Board.

French continued to be used at Guigues School as a language of instruction, with the Ontario Government losing its appetite for this divisive language battle in the midst of World War I. In the late 1920s, Ontario stopped trying to enforce Regulation 17, but it remained on the statute books until 1944.

Published in Speakers Presentations
More in this category: « The Barber Family: A Proud Place in Ottawa’s History Philemon Wright & His Town »
back to top