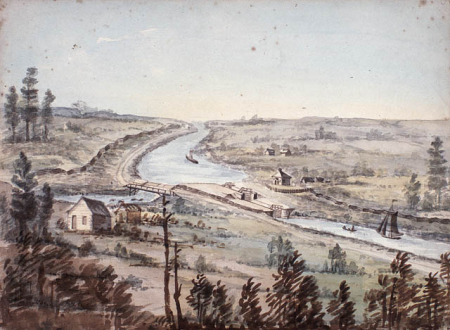 Construction of the Rideau Canal began early in the year 1827. Taking only four years to construct, it opened for navigation in the spring of 1832.

About 150 years later, Hunter McGill arrived in Ottawa to attend Carleton University, located near Hartwell’s Locks. Since the 1980s he has been a member of the Friends of the Rideau. Hunter talked about the history of the Canal, how it has operated since its opening, and some of his views on the Rideau Canal today.

The British Colonial Administration of Canada was very concerned, during and in the immediate after-math of the war of 1812, about the vulnerability of the blockading, by the United States forces, of the communications route via the St. Lawrence River from Montreal to Kingston.

In 1820, Lord Dalhousie was appointed Governor of British North America. The Duke of Wellington thought a canal was a good idea. With this high-level backing, Dalhousie, as a preliminary step, began to acquire land in key locations.

Dalhousie chose Entrance Valley, the present site between the Château Laurier and Parliament Hill, for the canal headlocks.

A retired Royal Engineer officer, Lt.-Col. John By, was reactivated and hired by the British Army Ordinance department to be Superintendent of the Rideau Canal. He was an excellent choice.

He recommended that the lock size plan be increased to accommodate steam-powered vessels that were just coming into use.

The definitive approval for the building of the Rideau Canal was given in September of 1826. Work, began early in 1827.

The work was hard and the tools modest, such as picks, shovels, draft animals, simple rigs to lift and postion the stones for the lock chamber walls. Diseases such as typhoid, malaria, typhus and poor nutrition were prevalent.

The opening of the entire canal for navigation took place in the spring of 1832. Of the completed 202 kilometres length of the Rideau Canal, 19 kilometres are constructed canal. The remainder is through natural waterways. Final cost was 822,000 pounds, about $150 million Canadian in today’s dollars.

By the time the canal was completed the military needs were not pressing. It was more needed as a commercial enterprise. The canal made movement of settlers into the region much easier.

With the completion of canals on the Ottawa River in 1834, transportation links were opened to Montreal. During the 19th century the Rideau waterway was used to transport minerals from iron, phosphate, and mica mines in the Rideau Lakes area to smelters and other users.

In the 20th century, as commercial navigation ebbed due to improved roads and railway lines, a recreational fishing and tourism industry developed.

It took engineering genius to construct the Canal, in four years, in the sparsely populated region of Canada using simple tools and facing dis-ease and other great challenges.

Hunter says we are not doing a good job of telling Canadians and visitors about the Rideau Canal. The designation of the Rideau Canal, in 2007, as a UNESCO World Heritage Site was only the second canal in the world to be so recognized. This helped to raise the profile of the canal, but it has not been matched by any of the three levels of government involved, he argued.

Hunter stated that the biggest threat to the historic character of the Rideau Canal is putting heritage landscapes at risk, thus making commemorative integrity an ongoing issue. Both private sector and public sector investments and infrastructure often do not adequately take into account the need to respect key settings.

Published in Speakers Presentations
More in this category: « A Tour of PMs’ Sandy Hill Homes Tree Trouble in Ottawa’s Urban Forest »
back to top