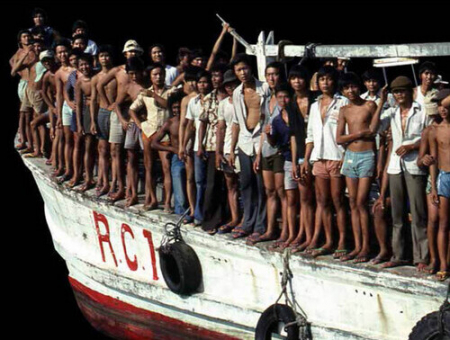 Our last presentation before the summer 2021 break took us halfway around the world but the story resonated here in Ottawa in 1979. After seeing stories on the news about the plight of refugees fleeing Cambodia and Laos and Vietnam, Ottawa mayor Marion Dewar anxiously arranged a public meeting at Lansdowne Park to gauge the interest within the city for sponsoring refugees in desperate need. Dewar expected about 500 people to show up, but when she arrived to open the meeting she discovered that 3,000 had arrived to do their part to provide new homes for refugees fleeing war-torn countries.

It is at this point in our story where two of the evening’s three guest speakers enters the picture.

Michael Molloy was the director of refugee policy in Canada from 1976 to 1978 and Senior Coordinator for the Indochinese Refugee Task Force. Canada had never before experienced a refugee crisis of such magnitude, so Mike and his colleagues had no playbook to go by to process refugees and get them safely to Canada.

The second speaker for the evening was Robert Shalka. He was in Thailand and had hoped initially to settle refugees there but realized that Canada was going to have to do its part to find homes for those forced to flee Cambodia and Laos. Robert spoke about processing centres in Singapore, Bangkok and other places in Asia and of the challenges of interviewing refugees, reconnecting separated families, finding resettlement lands in Thailand, or arranging transportation to Canada for refugees, as well as the process in Canada of organizing sponsors.

In 2017, Mike and Bob and two other foreign service offers, members of the Canadian Immigration Historical Society, collected their stories into a book, Running on Empty, which you can order through the McGill-Queen’s University Press website, at mqup.ca.

Last to speak was Rivaux Lay, who was in Thailand during the crisis, a Cambodian refugee himself, contributing as a social worker, translator and teacher’s aide at the refugee camps. You need to hear Rivaux’s story in his own words to fully appreciate what he went through in those horrific years, finally came to Canada, after helping so many others before him.

You can view the June 2021 presentation online via the HSO channel on YouTube.

Published in Speakers Presentations
More in this category: « James Powell: The Assassination of D’Arcy McGee
back to top