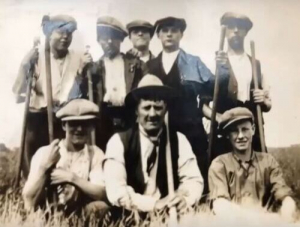 A few months ago, I had the honour of taking part in the Historical Society of Ottawa’s Speaker Series and speaking about my Grandpa Jack. My grandpa passed away when I was about 12 or 13 but during the lockdowns in 2020, I had a chance to reconnect with him. At the urging of my mother, he spent the last few months of his life using a tape recorder to record his early memories of coming to Canada as a British Home Child. Hearing his voice again, telling his own stories, has been an amazing gift for my family.

When I first started to work with them, I tried to keep two guiding questions in mind. First, was it possible to rebuild a connection to a family member who had passed away? Second, how can I best honour the recordings and pass them along to the next generation?

Jack Edward Kent was the oldest child born to Edwin and Elsie Kent on June 1, 1911 in Surrey England. He attended the boarding school of King Edward in Witley. Jack was naturally gifted and received awards in Divinity and School Work. Unfortunately, when his father passed away, there was no provision in his will to pay for additional education for Jack or his younger brother Bruce. It was decided that given the problems in post-First World War England, the best thing to do would be to send the two boys to the emigration home, and Jack found himself a few months later at the age of 16 on the Hooker’s family farm in Ormstown, Quebec. He recounts:

“Well, possibly the first thing I should say is how I came to Canada. I was in a boarding school in the south of England. My eyes were bad and I was told to get on the land. So my mother came down to the school and she said there’s nothing in England, maybe you should go to Australia. Well, I said. Bob Christian, my best friend, he’s thinking of going to New Zealand, maybe I should go too. So it was agreed.

The headmaster took me down to London. We filled out all the papers, the time came and I left school and I went to Hadley, the Sally Ann farm in Essex and I’ll have to talk about Hadley. It was a very pleasant place and after a while, we heard the New Zealand rep was coming. Good. I’m happy! Today I’m here; tomorrow I’m going to New Zealand. We line up and he says, I’ll have that one and that one’s o.k. Don’t want him – he wears glasses. They said to me, what do you want to do? Do you want to go home or do you want to go to Canada? I said I’ll go to Canada and that’s just how long it took.”

It is estimated around 100,000 British children were resettled in Canada between 1846 and 1948 under what was called the ‘Assisted Juvenile Emigration Program’ and became what Canadians would call “Home Children”. These children were usually between the ages of 7- 14 but could be anywhere between 6 months and 18 years old. About 70% of these children were settled in Ontario while the other 30% were spread between Quebec, Manitoba, British Columbia, and the Maritime provinces. The goal behind this program was to provide British children whose future was expected to be limited due to poverty, lack of family or other reasons a chance for a new life in Canada. Canada was also trying to increase their population so saw the value of bringing British immigrants over. The attraction to Canadian families who signed up for the program was a way to add children into their families, either as a member or source of labour.

Jack was lucky and had a lot of fond memories of the farm and of the Hooker family. Others, however, were not so fortunate. It’s now recognized that many of these Home Children experienced abuse and slave-like working conditions. Siblings were separated, as were Jack and Bruce, and all had to deal with the hardship of coming into a new life in a country far away from their families and homes.

The program was largely discontinued in the 1930s, but not entirely terminated until the 1970s. In the following decades, research was done to expose the abuse and hardships of the Home Children and their families. 1998 saw the Ontario Heritage Trust added a provincial historical plaque to the Home Children to the St George's Home in Ottawa explaining the history of home children.

I’m still working on finding answers to my guiding questions. However, through hearing Jack tell his own stories I can feel connected to him. I think he would have been excited to know his story was shared with the Historical Society of Ottawa.

You can view Emma's presentation on the HSO YouTube channel.

In this presentation HSO director Emma Kent shares stories from her grandfather's memoirs to explore what kind of life British Home Children faced.