"Through My Lens" With Guest Speaker Rod MacIvor 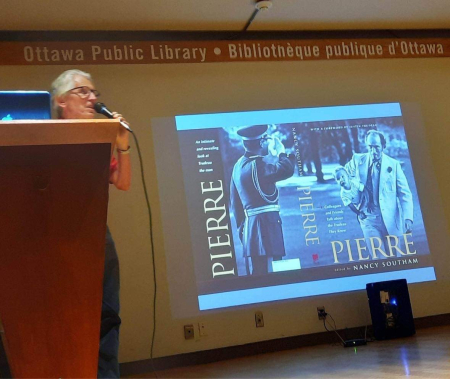 Rod MacIvor enthralled us on November 16, 2022, with tales from his four decades as an award-winning Ottawa-based photojournalist, while sharing images of some the most remarkable photographs he has captured over the years.

His seemingly endless portfolio of iconic photos included those taken of Pierre Trudeau and family (including the former PM's ground-breaking trip to Cuba in 1976), the Royal family, Wayne Gretzky, Jean Chrétien and more.

Rod shared some fascinating inside stories including dust-ups with Cuban security and providing Margaret Trudeau with photography lessons. Rod shared many humourous stories from his long career and the laughter was abundant among those of us in that afternoon's audience in the auditorium of the Ottawa Public Library's main branch.

We were also treated to a glimpse of the everyday and nature photography Rod enjoys in his retirement. (Those interested in seeing more might consider following Rod on Facebook!)

We are not, at this point, simulcasting and/or recording our afternoon presentations in the OPL auditorium, such as Rod's, but we would very much like to begin doing so if the volunteer resources to do so come forward.

In the meantime, here are two video links that might be of interest:

Published in Speakers Presentations
More in this category: « Mapping the Ottawa Valley’s Ancient Indigenous Trails
back to top