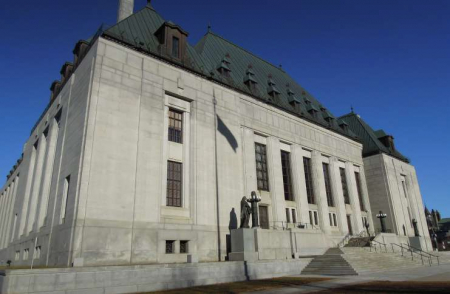 The Supreme Court of Canda building on Wellington Street, completed in 1941. Photo by Wilfred Gilchrist.

The second speaker at the HSO meeting on November 27, 2020, was Stephen McKenna. His grandfather, Patrick Kerwin, was a justice on the Supreme Court of Canada for 27 years, from 1935 until his death in 1963, the last nine years as Chief Justice. During this time, the Supreme Court was housed in two buildings at different locations on Wellington Street. Stephen’s talk, entitled ‘Along the Road to Today’s Supreme Court’, told some of the story of the two buildings.

The Supreme Court of Canada was created by an Act of Parliament in April 1875, when Alexander McKenzie was Prime Minister. Initially the Court heard cases in the Senate and were given a room in the original Parliament Buildings.

In 1881, after the Supreme Court had been operating for six years, Sir John A. Macdonald moved the Court into a two storey, gabled, Gothic style stone structure located at the north-east corner of Bank and Wellington Streets, just behind the West Block.

This new accommodation was built over former horse stables and workshops. Space was very cramped and the smells were dreadful, a result of the former use of the land. The Court didn’t have its own library yet. The justices had no privacy, the corridor just outside their offices was a public walkway. The building was an embarrassment to the Court.

Finally plans were made for a major expansion to the building. The construction budget, set at $11,000, grew to over $30,000 by the completion of the contract. The renovations added a basement and two additional storeys. This doubled the size of the court house. A library was added and stairs to the attic included.

For a time, the complaints slowed. But the smells were still there. In a report the Registrar of the Court said that while it was nice to have an addition “the building is filthy and quite unfit for the purpose for which it is used”. In 1906 a competition for new buildings was called but nothing came of it. At this time the area west of Parliament Hill, between Wellington Street and the river, was a mixture of businesses and middle- class homes. In 1918 they began to be expropriated. The last home was demolished in 1938.

In 1935, Patrick Kerwin was appointed to the Supreme Court. Stephen would hear his grandmother talk about the “bad air” and the dreadful state of the old building. As a teenager he didn’t know if he should take her seriously, but his research now shows that she was correct. In the 1930s Maclean’s magazine described it as a “shoddy little building”.

Finally plans for a new court house were announced. Building began in 1938. It was a massive building designed in the minimalist, classical style. It was completed in 1941 but the court didn’t get to move in until 1946 because of the Second World War. Maclean’s magazine now dubbed it as probably the finest public building in Canada. Stephen thinks it still is.

The Supreme Court heard their first case in February of 1946 in their new court room. Ernest Cormier, the architect, in addition to designing the building, designed all the new furnishings as well. It had a library with 135,000 volumes.

The old building was torn down in 1956 to make room for a parking lot, and later the RCMP vehicle screening and security entrance to the Hill. Today, in front of the Supreme Court there are two, three-metre bronze statues that stand next to the building’s front steps, Truth and Justice, created by Toronto artist, Walter Seymour Allward, creator of the Canadian National Vimy Memorial.

Published in Speakers Presentations
More in this category: « Buchan’s Talents Bedazzled Author A Caring and Daring Bytown Pioneer »
back to top