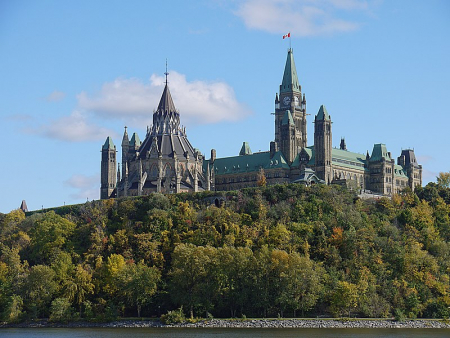 The bluff below Parliament Hill was once planted with white birches. But damage to the pretty birches from visitors and caterpillars caused a die-off. Óðinn / CC BY-SA 2.5 CA (Wikimedia Commons photo)

At the HSO November 2019 afternoon meeting, Joanna Dean, a Carleton University history professor, described to listeners the Trouble With Trees. While being a lover of trees, Joanna acknowledged that trees sometimes do cause the city and its residents problems.

William Saunders, the first director of the Experimental Farm was instrumental in promoting elm trees. Many were planted on King Edward Avenue and Clemow Avenue. However, in 1903, 1922, and 1932 reports, city engineers described problems that trees were causing to infrastructure. They heaved sidewalks, grew into the sewers, and tangled with a “multiplicity of poles carrying wires for telephone, telegraph, electric light, electric railway, and fire alarm services.” Various city utility companies took turns butchering the trees. It is estimated that 4,000 trees were removed between 1921 and 1945.

A shift came in the 1960s when Dutch elm disease came to Ottawa. It devastated these tall, stately trees. The dead elms had to be removed. The streets looked barren and empty. A city-wide planting campaign was put in place, 2600 trees were planted in 1961, compared to 24 trees planted in 1944.

The white birch is another popular city tree. During construction of the Parliament Buildings in the 1860s, the bluffs along the river were a handy dumping place for refuse and rubble. To make the bluffs accessible to the public a walkway, named Lover’s Walk, was built in the late 1800s that wound along the sides of the hill. The walk became a major tourist attraction. White birches were planted in the early 1900s. Birches are a pretty tree but are susceptible to disease and didn’t do well. People pulled bark off, the canopy was thin, the roots were exposed, and caterpillars were identified. The trees were struggling. In the end the walk was closed. The birches died out.

Lombardy poplars were planted in the Glebe, bordering Central Park. They are fast growers, up to six feet in a year, and a great shade tree. So fast and so shady that they caused consternation with the neighbours. Some of whom complained to the Federal District Commission, now the NCC, for years. A few were cut down to limit the complaints. Trees cause trouble. Political trouble.

Crab apple trees were planted as the 1967 Centennial tree, a declared war on ugliness, a Made in Canada solution. They were and are a very pretty tree. But they are so susceptible to disease that even Trevor Cole who managed the arboretum in the Central Experimental Farm singles them out as trees that should not be planted.

Bur oaks are native to Canada and to the Ottawa area. Champlain described them when he came up the Ottawa River. The Deschênes Rapids are named after them. They can live up to 300 years. When one that is a mere 150 years old was approved by the city to be removed in Champlain Park to make room for a house expansion it impacted the neighbourhood. It was taken down. Joanna obtained a cookie from the trunk and counted the rings. It was 158 years old.

From the human perspective, trees cause problems. We need to remember that from the trees perspective they are simply pursuing their own agenda.