Tunney’s Pasture - The Story Behind Ottawa’s Field of Dreams 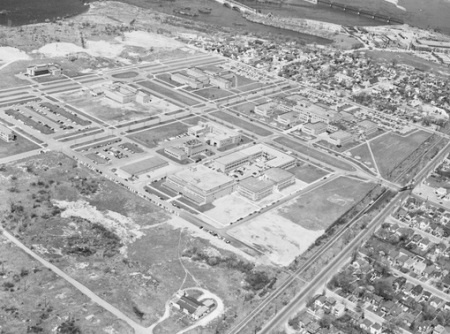 If there’s one area of Ottawa that seems devoid of history, it’s easy to imagine Tunney’s Pasture being that place, but our September 29th guest speaker, Dave Allston managed to add some humanity to the story of an area famous for its dehumanizing buildings and wide, vacant parks. Tunney’s Pasture has a much richer history than you might expect.

Dave is a long time resident of Ottawa’s west end, and maintains a website, The Kitchissippi Museum, dedicated to telling the stories of communities like Hintonburg, McKellar Park, and Britannia.

A number of developers in the early decades of the 1900s had dreams of building neighbourhoods in Tunney’s Pasture but these failed. A few factories moved into the area, close to the railway tracks, but otherwise the area remained as its present name suggests: acres and acres of pasture. When a small community finally did develop during the Depression it was an isolated collection of shacks, forgotten by following generations. These homes remained in dwindling numbers until the late 1950s when they were finally removed by the federal government when the office development went up. Dave’s presentation included some touching photos of the poor families that managed to eek out an existence in homes without heat, electricity, and running water. At a time when even Ottawa’s finer neighbourhoods were suffering through a deep Depression, the residents of Tunny’s Pasture had a particularly sad tale to tell. Yet as Dave noted in his presentation, the people in his collection of rare photos all seem to be smiling.

It makes you think that perhaps Tunney’s Pasture was not so bad a place at all. Certainly Dave’s presentation proved that Ottawa’s enclave of office towers has an interesting past.

Visit Dave’s website at kitchissippimuseum.blogspot.com for more stories about Tunney’s Pasture and of Ottawa’s other west end communities.

Check out the HSO YouTube channel for a video of Dave's full presentation.

Published in Speakers Presentations
More in this category: « Jim Hurcomb: Rockin' on the Rideau
back to top