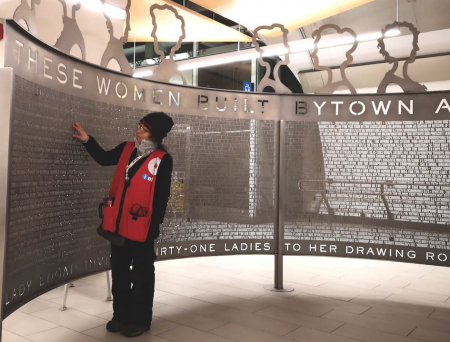 An elaborate public art installation at the new Lyon Street light rail transit station in downtown Ottawa is sharing the origin story of the HSO with thousands of daily commuters.

Individualized silhouettes representing the 32 women who were present at the first meeting of the society in June 1898 adorn the top of the two-metre tall sculpture, which is fully reproduced in French.

The artwork covers a 14 x 4 metre area along a main public concourse, even snaking around one of the station’s support pillars.

Along the bottom edge of the steel curtain of text, another message in large letters details the historic gathering that brought the society into existence more than 120 years ago: “Lady Edgar invited thirty-one ladies to her drawing room on 3 June 1898 to consider the formation of a Women’s Historical Society.”

The same messages appear in the French-language half of the art-work, titled Par la Force des Mots. 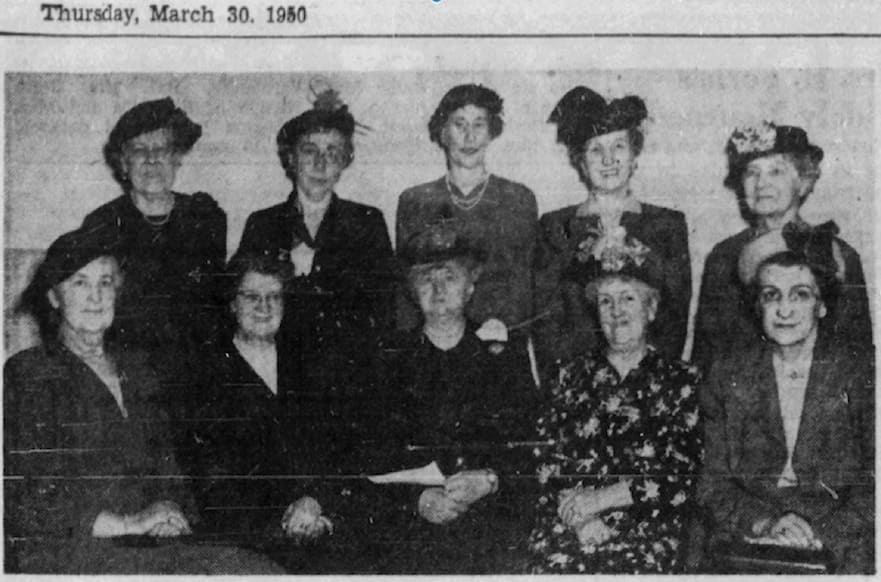 In March 1950, the Ottawa Citizen covered the appointment of the directors of the Women’s Canadian Historical Society of Ottawa, which would soon admit male members and rename itself the Historical Society of Ottawa. She added: “With Words as Their Actions pays tribute to the women who kept Bytown alive long after its transformation into Ottawa . . . Here were these women who were saying, ‘We are going to start losing history if we don’t start saving it.’ ”

The installation was created by the Toronto-based firm PLANT Architect Inc., which was awarded the commission after a public art competition held in 2015. The company previously created the Canadian Firefighters Memorial on LeBreton Flats.

As part of the contract for construction of the LRT system, one per cent of the overall construction cost was set aside for displays of artwork at each of the 13 light rail stations.

PLANT Architect’s tribute to the founders of the WCHSO and their work as preservers and promoters of the city’s history cost $200,000.

The silhouetted figures are arrayed in pairs of women facing each other, “representing the society’s founders gathered in conversation” and “passing their knowledge from one another, and to the viewer,” the creators explained.

“This historical society was Ottawa’s first, and from the late 19th century until after World War II, all of its members were female,” PLANT partner Lisa Rapoport, the project’s design lead, told the Daily Commercial News in an interview earlier this year. “While their husbands were building with wood, stone, rail ties and financial capital, the society’s members were building an edifice of words and stories.” 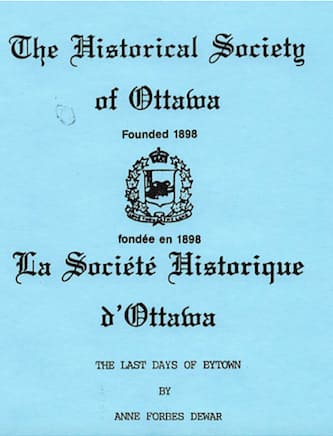 Society member Anne Forbes Dewar, top left, authored a 1954 paper titled “ The Last Days of Bytown ,” republished by the HSO in 1989. The entire 5,000-word text of the pamphlet — in English and French — has been incorporated in a steel sculpture installed at the Lyon LRT station that celebrates the role of the WCHSO in preserving and promoting Ottawa’s history.

The design, states a PLANT over-view of the project, “celebrates women as keepers of history — and in particular, the 32 women who, in 1898, founded the Ottawa chapter of the Women’s Canadian Historical Society (now the Historical Society of Ottawa).”

The bulk of the sculpture is comprised of alternating English and French lines of text from a presentation titled “The Last Days of By-town,” written in 1954 by society member Anne Forbes Dewar and published in 1989 as No. 32 of the HSO’s Bytown Pamphlet series.

There are now more than 100 published papers in the Bytown Pamphlet series, most of which are available for download at the HSO website — including Dewar’s essay — and all of which are available through the Ottawa Public Library. In a brief introduction to the Dewar pamphlet, the author was described as “an early and active member” of the WCHSO, which she also served as a board member: “She loved history and was extremely knowledgeable and well-read, especially about local history.”

Dewar, who died in 1964, had prepared her 1954 research paper by poring over old Ottawa newspapers, consulting local history books and tapping a variety of other sources to paint a portrait of Bytown as it exist- ed 100 years earlier, in 1854 — the year before the city was officially renamed Ottawa on Jan. 1, 1855.

“This is an amazing document,” Rapoport said in the DCN interview, referring to Dewar’s painstaking reconstruction of 1854 Bytown, on the eve the change to the City of Ottawa. “We thought it would be great for everybody to read it.”

Among the most noteworthy passages in Dewar’s pamphlet — especially now that her words have been laser-cut in steel into a permanent artwork at a downtown train station — were her observations about the December 1854 inauguration of the Bytown and Prescott Railway.

It was a landmark event in Ottawa history and marks the birth of rail transportation in the city.

In recounting the arrival in By-town of the first-ever trainload of passengers from Prescott on Christmas Day 1854, Dewar commented that a celebratory banquet following the event “provided the appropriate jollification.”

She then offered further thoughts on the railway’s launch that should offer some solace to present-day city officials who have faced sharp criticism over the LRT’s bumpy rollout throughout the fall and early winter of 2019.

“The railway had been a great accomplishment,” Dewar wrote of the launch of train service in 1854. “As might have been expected in the early days of operation, unlooked for difficulties arose . . . (but) before long the Bytown and Prescott was generally acknowledged to be the safest and smoothest railway line on the American continent.” 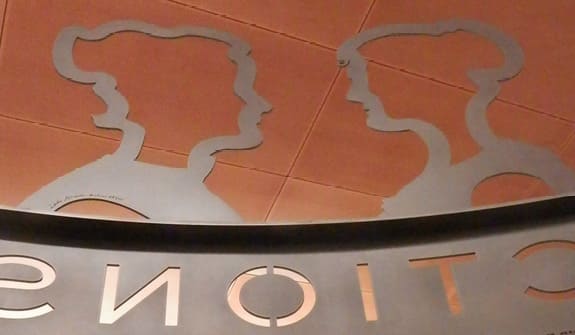 The silhouettes of Lady Matilda Ridout Elgar, host of the inaugural meeting of the WCHSO, and found- ing member Gertrude Kenny appear to engage in conversation atop the massive art installation at the Lyon Street LRT station.
Photo: Randy BoswellSeveral HSO members, including past president George Neville and former board members Don Baxter and Bryan Cook, were consulted during the design of the Lyon Station artwork.

The impressive LRT tribute to the matriarchs of the present Historical Society of Ottawa joins a host of other landmarks around the capital attesting to the HSO’s enduring impact since its founding near the end of the 19th century.

These include the Bytown Museum beside the Rideau Canal head-locks and the statue of Lt.-Col. John By in Major’s Hill Park, both of which were society initiatives.

“No longer will only society members be familiar with our beginnings as the WCHSO,” said Karen Lynn Ouellette, president of the Historical Society of Ottawa. “This stunning artistic installation invites all LRT travellers to learn about our society’s contributions to saving and sharing our local heritage.”

She added: “I am so proud to be part of this legacy of women helping to preserve our city’s history.”

The curving, curtain-like sculpture (below), a tribute to the female founders of the historical society, invites passersby to sample bits of early Ottawa history inscribed in steel.
Photo Randy Boswell

Published in HSO News
More in this category: John Reeder: Webmaster and Walker Extraordinaire Retires »
back to top