National Day for Truth and Reconciliation 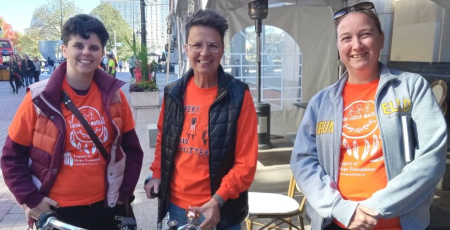 As most of our older members, but few of our newer members know, the HSO is in strong financial shape because of former president George Neville’s prudent leadership. And now the next generation of directors are having fun finding meaningful projects to support around town that showcase local history.

On September 30, 2022, on only the second ever National Day for Truth and Reconciliation, your HSO partnered with the Ottawa-based First Nations Child and Family Caring Society and Beechwood Cemetery for its annual educational activities.

Our donation provided a ride in style on the Lady Dive between Beechwood and Sparks Street where hourly walking tours were led up to St. Andrew’s at the corner of Wellington and Kent Streets.

Over 100 participants gathered at Beechwood at 10 am on the beautiful fall day, including HSO president Emma Kent and myself. First, we took in a children’s film produced by the First Nation Child and Family Caring Society to educate little ones about the history and enduring legacy of residential schools.

After the film we took the Beechwood tour which started off at Nicholas Floor Gavin’s memorial and ended at Peter Henderson Bryce’s. What most impressed me was the speaker’s focus on both their contributions and shortcomings. Gavin was a proponent of both women’s suffrage and the removal of Indigenous children from the “influence of the Wigwam”. Bryce documented and reported health abuses and high death rates in the residential school system while the chief medical officer of the Department of Indian Affairs; however, didn’t follow up on his observations with the publication of “The Story of a National Crime: An Appeal of Justice to the Indians of Canada” until after he had retired from the public service. Along the path down to Dr. Bryce’s memorial, there were 93 signs bearing the Truth and Reconciliation Commission Calls to Action.

We then headed over to Sparks Street on the Lady Dive where we learned more about the upcoming installation of the plaque “Reconciling History: Dr. Peter Henderson Bryce” – a trilingual (Algonquin, English, and French!) text that will be installed where his offices were located at 61 Sparks Street. The downtown tour ended at St. Andrew’s Presbyterian Church, which was built in 1828, and which is now a strong supporter of the Every Child Matters movement. We were also provided with snacks and chats at St. Andrew’s and had the chance to take in the beautiful interior.

Many thanks to Nick McCarthy, Beechwood’s Director of Marketing, Communications and Community Outreach, for all of his support, and we hope to participate again next year!

You can see a very nervous yours truly and sincere Emma speaking about her experience on that day in this video: www.youtube.com/watch?v=hgpI0INDgKo

Published in HSO News
More in this category: « HSO Presents: Our Land, Our People — The Algonquins "Island on Fire": Free 3-Part Saturday Morning “Book Club” Workshop »
back to top