We do indeed live in interesting times. Normally HSO holds its Annual General Meeting in May, but with all of us putting our lives on hold, the decision was made in April to postpone the AGM until we could safely get together again. Once it became clear that a community gathering was not going to happen soon, the decision was made to invite as many members as possible to join us electronically for an Annual General Meeting on July 22, 2020. We’re aware that this is not a perfect solution, since some of our members may not have an internet connection, but at this “interesting time” we felt that an on-line AGM, via Zoom, was the best way to connect to members and get some much-needed housecleaning done.

If you’ve not heard of Zoom (I hadn’t until just a few months ago), it’s like a conference call but on your computer or tablet. Zoom allows those who have linked in to the meeting to post comments, ask questions and – most importantly for us – vote on motions.

Considering this was our first attempt at an on-line AGM, and a first-time experience for many of the 29 members who joined in, the event went smoothly. A glitch with the voting process early on was quickly resolved by having members vote through the “Chat” option. Special thank to one of our directors, Erik Foisy, for chairing the event under challenging circumstances.

Here’s an update of the AGM for those who were unable to “attend”.

James Powell was invited to present members with a brief explanation of our 2020 Budget, and a Special Financial Statement. Before voting to approve these, Karen Lynn made a motion (seconded by Dylan Van Heck) that monies in excess of $50,000 in the R&D fund and $10,000 in the Colonel By Fund be used to fund projects consistent with the HSO mandate. After discussion, the motion was present and carried. As a result of approval of this motion, Karen Lynn made another motion (seconded by Dorothy Phillips), that HSO develop a clear process to encourage and receive ideas from our members about how to utilize these liberated funds, reviewing the ideas based on clear criteria supporting the society’s mandate, and a clear process for decision-making. The participating members discussed this motion through Zoom’s “Chat” option. The motion was carried.

Next, a motion to approve the HSO’s 2020 Budget was made by Dylan Van Heck, and seconded by Lynn Payton. The motion was carried.

Last on the agenda was the nomination and election of directors. The slate of directors presented, alphabetically, is as follows: Dave Allston (Director at Large), Randy Boswell (Newsletter and Publications), Richard Collins (Director at Large), Erik Foisy (Treasurer), Kathy Krywicki (Secretary), George Neville (Past President), Karen Lynn Ouellette (President), Evlyn Payton (Special Events), and James Powell (Communications). Dylan Van Heck (who, as you can tell by now is an experienced Chat user and, as a result, quick to reply to motions) made the motion to accept the slate of directors as presented. I had the honour of seconding the last motion of the AGM. The motion was carried.

It took about 90 minutes to get through the meeting, but it was necessary, and those who participated generally agreed that our first “virtual AGM” was a unique experience and well worth their time.

Owing to the ongoing COVID-19 emergency, our President, Karen Lynn Ouellette, unanimously supported by the Society’s Board of Directors, announces that the Society’s Annual General Meeting, scheduled to be held on Wednesday, May 27, 2020 at the Main Branch of the Ottawa Public Library, has been postponed. The meeting will be rescheduled once there is a clearer idea of when the emergency will be lifted and members can once again meet in safety.

The Society is managed by its members through a volunteer Board of Directors elected each year at its Annual General meeting in the spring.

From time to time, the President can appoint individuals as Officers with a special portfolio. Officers work closely with the Board of Directors but don't have board voting privileges. 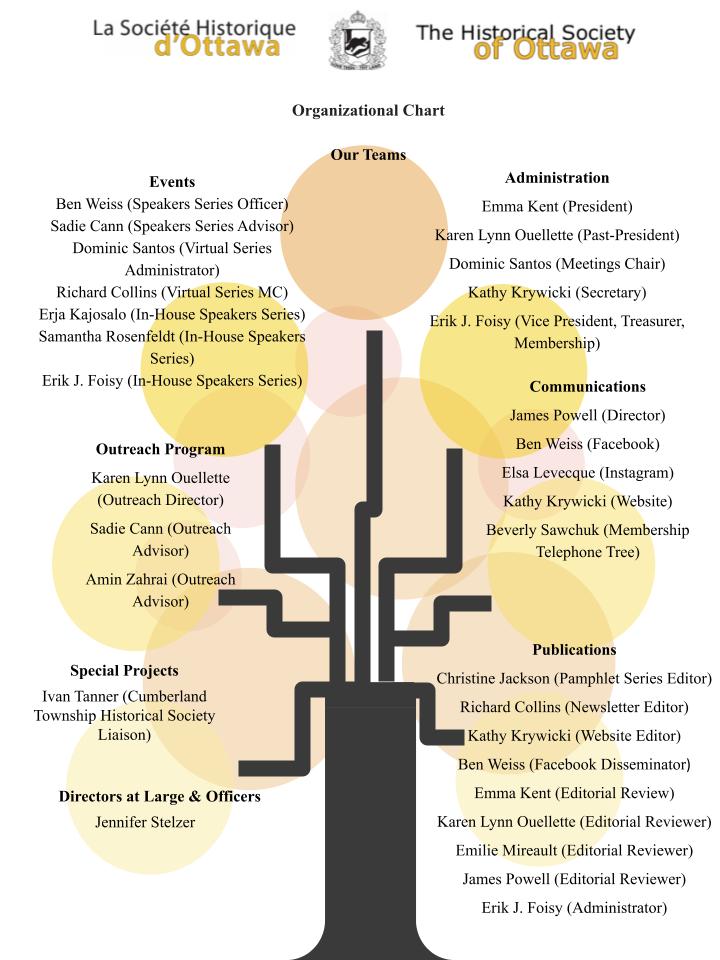