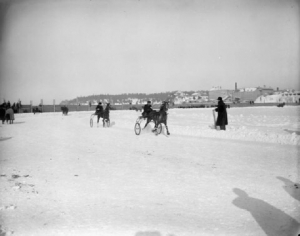 Football fans in this town have managed to remain loyal to their home team for 145 years, be it the Rough Riders, or the Renegades, or back again to the Rough Riders, and now the Redblacks. Hockey fans have retained their allegiance to two different Senators teams over 80 seasons, separated a by a 58-year winter when locals were forced to chose between the Leafs, Habs, or other members of the Original Six. But as we learned at our January 26th presentation, Ottawa’s sports history is much more than hockey and football.

Our guest speaker for the January 26, 2022, Virtual Speaker Series was HSO member James Powell, who began his presentation by reminding us that in the late 19th century, watching professional sports was not nearly as popular as participating in amateur pastimes like lacrosse, cricket, and cycling. As James noted, skiing was a popular pastime in Ottawa before devotees could even come to agreement on how to spell the name of their favourite sport.

As always, when it comes to James’ presentations, his history is well researched. During the Q&A session that followed, one participant though he might have stumped James with a question regarding the obscure sport of “hose reel racing” which was held annually in Ottawa a century ago. Suffice to say, James had an answer. I won’t tell you here what hose reel racing is. You’ll find it more entertaining to watch James’ presentation for the answer.

Like all our Virtual Speaker Series presentations, you can find James’ talk at our HSO website. The website is also the place to register for upcoming presentations.