A Walk Down Sparks Street 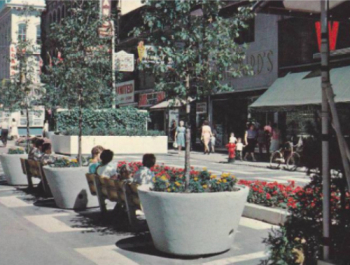 By the end of the 1950s, Sparks Street, Ottawa’s premier shopping district, home to major department stores, such as Murphy-Gamble, Morgan’s, and Woolworth’s, as well as jewellery boutiques, restaurants, and banks, was in decline. Shop fronts were starting to look shabby and dated. Competition from newfangled suburban shopping centres with lots of free parking was taking its toll. But the removal of the last street cars in May 1959 offered the street’s merchants the opportunity to buck the trend. Forming the Sparks Street Development Association, their solution was a pedestrian mall, an idea first suggested years earlier by Jacques Greber, the hyperactive French urban design consultant to the federal government charged with beautifying the city. Business owners hoped that a mall would boost customer traffic and commerce.

Overcoming the initial reluctance of City Hall, and opposition from Ottawa’s fire chief who was concerned about access in the event of fire, a temporary pedestrian mall, designed by Walter Balharrie, was officially opened by Mayor George Nelms on Friday, 20 May 1960. To add a note of glamour, the first Miss Dominion of Canada, “pretty Eileen Butter” of Ancaster, Ontario shared the podium with city and mall dignitaries. The street had actually been closed to vehicular traffic the previous Saturday evening so that workmen could paint patterns on the repaved roadway; install fifty potted trees, put in yellow, moulded, fibreglass benches, erect canopies, and install temporary flower beds. The National Gallery of Canada also loaned the mall a statue by prominent sculptor, Louis Archambeault, titled “Iron Bird.” Another Mall attraction was the introduction of outdoor cafés.

The Mall was well received by the general public. Immediately prior to its opening, the Ottawa Citizen enthused that “the public is becoming as proud of Sparks Street as a housewife is of her newly-washed sparkling windows” and that the “promenade will finish the job,” making the street a “place to dream in as well as to shop.” A New York expert lauded the Mall saying that it was the best planned and most well conceived of the several malls he had studied. He also opined that it would be a “great stimulant” to the local economy and would revitalize the city.

Sparks Street was reopened to traffic in early September 1960. But with the mall experiment deemed a success, a fact confirmed by a survey which indicated that supporters vastly outnumbered opponents, the temporary mall returned the following six summers. It became a permanent feature of the Ottawa cityscape in 1967, Canada’s centennial year. That year, the Sparks Street Mall, the first permanent pedestrian mall in North America, was made resplendent with fountains, sculptures, trees, plants, kiosks and canopies at a cost of $636,000. With the Canadian Guards Band striking up “God Save the Queen,” the new permanent Mall was officially opened on 28 June by Mayor Don Reid. Unfortunately, technical glitches meant that only one of the three fountains on the Mall was operational, and there was no sign of the planned rock garden. Proposed infra-red heating elements to be located under the canopies to keep pedestrians warm in winter were also not installed owning to cost considerations.

Although the establishment of the Mall may have slowed the decline of Sparks Street as a commercial and shopping district, urban blight continued. One by one, the major department stores closed their doors. The opening in 1983 of the downtown Rideau Centre, a major indoor shopping centre with ample parking, provided a major blow to Mall fortunes. Sparks Street retail sales plunged, as tourists and residents alike took their business to the Centre’s modern shopping facilities located in close proximity to the Byward Market’s many restaurants and nightclubs. Stalwarts, such as Birks Jewellers, also decamped to the Rideau Centre, leaving the Mall’s shopping façade snaggle-toothed.

In an effort to rejuvenate the Mall, governments and area merchants spent $5.5 million in 1986 to perk up things. Granite sidewalks, traditional lamp standards, and pavilions housing pay phones and mall directories were installed. The remodelling was not well received. The pavilions were bulky and obstructed the view of the Mall’s distinctive architecture. One heritage expert called them “gimmicky.” The improvements also did not address the Mall’s comparative disadvantages, including inadequate parking facilities and the lack of major anchor stores. It continued to be eclipsed by the Rideau Centre where people could shop in comfort during Ottawa’s cold winter months, and by suburban shopping centres which were conveniently located to where people lived. Street merchants also complained that their landlord—the federal government—which had expropriated many of the buildings on Spark Street owing to their proximity to Parliament Hill and their historic nature, was unresponsive to their needs and slow to act.

The decline of Sparks Street continued through the 1990s and 2000s. Shops continued to close. Much of an entire block of shops on the south side of the street between Bank Street and O’Connor Street was bulldozed in 2003 to make way for the CBC Ottawa Broadcast Centre. While care was taken to ensure that the Spark Street side of the new Centre was consistent with its low-rise neighbours, the new building did little to enhance Mall shopping. Moreover, with its principal entrance on Queen Street, pedestrian traffic declined. Extensive renovations by the federal government to the former Metropolitan Life building (now the Wellington building), as well as to the historic Beaux Arts former Bank of Montreal building has kept much of Sparks Street a building site for years. Now that the Bank of Canada headquarters at the western end of Sparks Street is under renovation, it will remain that way until at least 2017. As a final insult, in 2013, Zellers and Smithbooks, street features for decades, closed, leaving much of the Mall a shopping wasteland.

Today, the Mall is a shadow of its former self. Although its outdoor cafés, including a new microbrewery and restaurant at 240 Sparks, provide some life during the summer months, as do special events, such as the annual Buskers’ Festival or Ribs’ Fest, there is little shopping to attract people, residents or tourists, the rest of the year. Hopes for an urban renewal now centre on the possible construction of a boutique hotel and condominiums on the Mall.