Dow’s Lake and Its Causeway 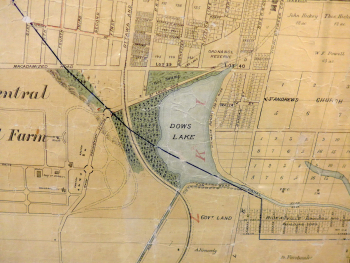 Dow’s Lake, circa 1888. Notice the St. Louis Dam. Today’s Queen Elizabeth Driveway runs on top of the St. Louis Dam. The Central Experimental Farm is on the left side of the map. The “macadamized road” north of the Farm is now Carling Avenue. The railway line to the left of Dow’s Lake is the Ottawa and Prescott Railway.

Dow’s Lake nestles in the heart of Ottawa much like a pearl in an oyster. It’s the centre of much of the city’s recreational activities, hosting skating in the depths of an Ottawa winter and canoeing and kayaking during the glorious days of summer. The boathouse at Dow’s Lake Pavilion provides welcome marina facilities for sailors travelling from Kingston to Ottawa through the Rideau Canal system. There too you will find canoes and pedalos for rent as well as restaurants to tempt the taste buds of Ottawa residents and tourists no matter the time of the year. Around the lake’s perimeter are parks, pathways and driveways frequented by joggers and cyclists. On one side is the Dominion Arboretum, part of the Central Experimental Farm, a favoured venue for picnics by families and lovers alike. On the other is Commissioners’ Park, the home of Ottawa’s annual tulip festival in May, and magnificent beds of annuals during the rest of the summer.

Of course, this was not always the case. At one time, Dow’s Lake marked the outer limits of Ottawa—beyond here be devils, or at least Nepean. But urban sprawl and amalgamation with surrounding communities have brought it well inside the Capital’s embrace. The lake is named for Abraham Dow, an American who came north in 1814 and acquired “Lot M in Concession C” in the Township of Gloucester. Samuel and Mabel Dow followed him two years later and settled nearby. Much of the Dow land was a mosquito-infested swamp that extended from the Rideau River to the Ottawa River. Roughly two-thirds of the swamp’s water flowed into the Rideau River, with the remainder debouching northward into the Ottawa River. Samuel and Mabel Dow must have despaired of their new home as they returned to the United States in 1826.

That same year, however, things began to change with the building of the Rideau Canal through Dow’s Great Swamp. To make a navigable route, Irish and French-Canadian workers, labouring under the direction of Lieutenant-Colonel John By’s Royal Sappers and Engineers, built two embankments. The first was constructed along what became the southern end of Dow’s Lake. Work on the embankment was started by a contractor named Henderson but was finished by Philemon Wright & Sons. The second, was constructed by Jean St. Louis, a French-Canadian pioneer in the region. Known as the St. Louis Dam, it blocked a creek flowing northward to the Ottawa River. The creek bed is now Preston Street. The work was difficult and dangerous. Many workers sickened with malaria. But they succeeded in raising the level of the water in the swamp to a depth of twenty feet, more than adequate for boats to traverse. Dow’s Great Swamp had been transformed into Dow’s Lake.

The new lake remained a remote place for Ottawa citizens for most of the remainder of the nineteenth century. But as the city’s population increased, the city expanded southward towards the lake, a process that was accelerated by the creation of the Experimental Farm on Dow’s Lake’s northern fringe in 1886. The extension of the electric streetcar service to the Farm ten years later turned Dow’s Lake into a popular boating and swimming area. One indignant boater of this time wrote an angry letter to the editor of the Journal newspaper complaining that foul-mouthed, naked boys were diving into the Canal at its juncture with Dow’s Lake, swimming under pleasure boats, and shocking the ladies.

In 1899, the Ottawa Improvement Commission (OIC) was formed by the Dominion Government for the express purpose of beautifying the nation’s capital which was still largely a rough lumbering town. The Commission’s first big project was the creation of the Rideau Canal Driveway, renamed three decades later the Queen Elizabeth Driveway after the wife of King George VI. The Driveway ran from downtown Ottawa at Elgin Street, along the western side of the Canal, to the Experimental Farm. This became the scenic southern gateway road into the Capital during the early part of the twentieth century. Conveniently, much of the land used for the Driveway was already owned by the Dominion government as an ordnance reserve.

As part of the Driveway, the Commission constructed a diagonal causeway across Dow’s Lake from the eastern shore of the lake to the Experimental Farm. The first intimations of such an idea emerged in 1900 when it was revealed that the OIC was considering the building of a “pier” across the lake to the Experimental Farm, similar to the one that had just been completed at Britannia Bay. The OIC hoped that the pier would be “of ample width and character to make it one of the prettiest portions of the drive.”

In 1902, the five OIC commissioners decided to proceed. It was a close 3-2 vote. One of the dissenters was Ottawa’s Mayor Fred Cook who favoured extending the Driveway around the perimeter of the lake to the Experimental Farm instead of cutting through the lake. However, this would have meant displacing the J.R. Booth Company’s lumber piling ground located on the north-western part of Dow’s Lake close to the St.-Louis Dam. Booth had moved his lumber to this site in 1885, which was then beyond the city limits, due to concerns about the risk of fire—a not insignificant risk. But Booth was a major taxpayer and employer in the city. Weighing the economic and political risks, the Commission apparently felt it prudent to build a causeway rather than displace a company owned by one of the city’s most prominent citizens. 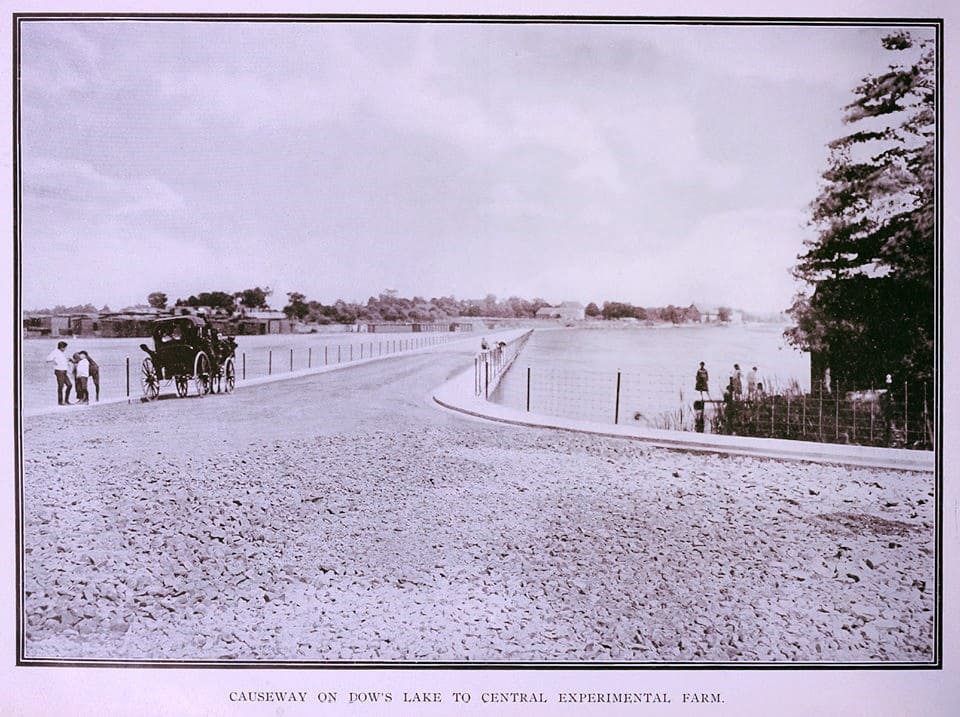 Dow's Lake Causeway to the Experimental Farm, circa 1904. Notice the macadamized road surface.
Source: Don Ross, FlickrThe causeway was constructed in 1904 linking Lakeside Avenue on the eastern side of the lake to the corner of Preston Street and the Experimental Farm, roughly where Dow’s Lake Pavilion stands today. Consequently, Dow’s Lake was bisected, with a triangular northern section cut off from the main body of water. Although the Commission got its way with respect to a causeway across the lake, it failed in constructing a huge aviary that it had hoped to build on the shores of Dow’s Lake similar to the one at the Bronx Zoo in New York. Cost was the likely factor. The Commission had planned to stock the aviary with representatives of every species of native Canadian bird.

The Dow’s Lake causeway lasted for roughly a quarter of a century. Narrow, high-crowned and unlit at night, the causeway was the location of many accidents. Apparently, the sight of automobiles being winched from the lake was not uncommon.

In 1926, the OIC, which became the Federal District Commission (the forerunner of the National Capital Commission) the following year under the direction of Thomas Ahearn, asked the Dominion Government to remove the causeway and extend the Driveway around the lake as originally championed by former Mayor Cook. In March 1927, the Railways and Canals Department of the Dominion Government agreed to demolish the causeway once 2,500 feet of new driveway had been laid through the old Booth piling grounds to the Experimental Farm.

On 27 December 1928, after the water level in the Rideau Canal had been lowered for the winter, a steam shovel began to deconstruct the causeway. Excavated material was repurposed to reinforce the retaining wall at the lake. Along the new stretch of Driveway, the FDC planted young trees to hide what was left of the Booth piling yards. The project was wrapped up by the end of March 1929. When the water was let back in the lake the following month, Dow’s Lake was restored to its full extent, much to the delight of boaters and canoeists. Residents along the lake were also pleased with the sparkling blue expanse in front of them. 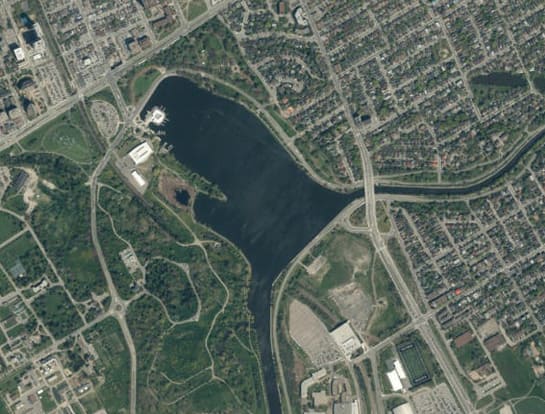 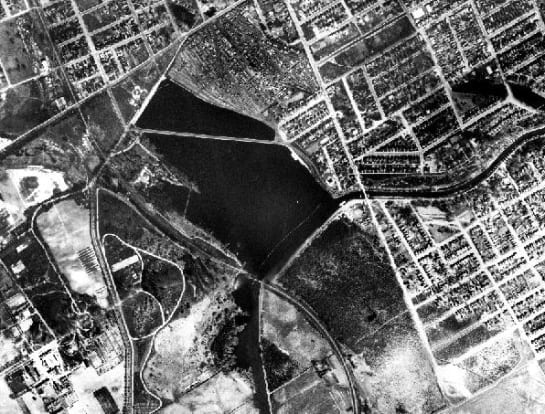 All that was left of the old causeway were remnant rock piles that were covered with several feet of water. Alex Stuart, the Superintendent of the Federal District Commission, assured boaters that these rock piles would not pose a threat to navigation. He expected that there would be roughly five feet of water above the site of the old causeway, more than sufficient clearance for boats on the Canal which typically had a draught of no more than three feet. He also claimed that the action of flooding the lakebed would cause the remaining pieces of the causeway to subside.

Still, additional work was carried out in 1936 to dredge sections of the old causeway. This action enabled fish to swim into the deeper parts of the lake during the winter. It seems that the remnant foundation of the causeway was sufficiently high to trap fish once the water level in the canal and lake was lowered in the fall. During a cold winter, the shallow water remaining in the northern part of the lake froze to the bottom killing trapped fish.

Today, the causeway is all but forgotten by Ottawa residents. However, when the water is let out in the fall, traces of the old causeway in the form of low, narrow, stone islands that cross the lake can still be seen. Its location can also can be determined with hydrographic charts.