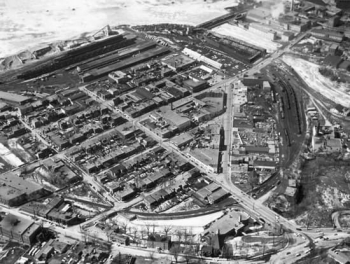 It came without warning; a notice addressed to residents of LeBreton Flats reading “This letter will advise you that on April 18, 1962, the National Capital Commission [NCC] filed a notice of expropriation covering the property at [your address.]” With that, 2,800 residents, along with hundreds of businesses, were obliged to move. They were given two years to relocate. The decision to raze the neighbourhood was taken without public consultations, presumably to avoid land speculation. Even Ottawa’s mayor, Charlotte Whitton, was kept in the dark.

In total, 53 acres of land was forcibly acquired from 240 landlords. The government paid fair market value for the land at a cost of about $17 million. The expropriation was part of a project to redevelop the entire LeBreton Flats area of roughly 154 acres. The federal government already owned 60 acres of railway yards and tracks purchased from the Canadian Pacific Railway in an initiative to remove trains from downtown Ottawa. Another 29 acres were to be reclaimed from Nepean Bay, with streets accounting for the remaining 12 acres. The last building to fall to the wrecking ball was the Duke House, the former Couillard Hotel, in October 1965. More than 250 people had crowded into the tavern the previous St Patrick’s Day, its last day in operation, to celebrate its passing. With the Duke House’s demolition, LeBreton Flats, a historic neighbourhood that dated back to the mid 19th century, was nothing but a memory. Its final days were memorialized in oil paintings by local artist Ralph Burton which now hang in the Ottawa City Hall.

The rationale for the expropriation was to eliminate “a real eye sore” of deteriorating housing stock and dirty industry within walking distance of Parliament Hill. The NCC planned to transform the area into something worthy of a national capital, with the construction of up to ten government buildings, along with monuments, parks and parkways. Notwithstanding Prime Minister Diefenbaker’s ambition to complete the project in time for Canada’s centennial on 1 July 1967, Lebreton Flats remained a barren wasteland of weeds, rubble, car parks, and snow dumps for more than 40 years.

There are a myriad of explanations for what went wrong. Changing priorities, cost, recessions, ineptitude, and the discovery of toxins in the soil all played a part in slowing the Flats’ renaissance. The fact that the area was owned for much of the time by three different levels of government, the NCC, the regional government, and the City of Ottawa, didn’t help either.

Many have questioned the original decision by the NCC to bulldoze the Flats, viewing it as a crime committed against the poor. Some look back with nostalgia to a neighbourhood, while hardscrabbled, had a sense of community. But others argue that LeBreton Flats was a gritty, dirty slum. Many of its buildings had been hastily constructed after the 1900 fire which had gutted the area. Only two structures had survived the flames, one ironically being the Couillard Hotel, the last building to demolished in 1965. By the early 1960s, the area was unquestionably rundown, an unhealthy mix of dilapidated houses, scrap yards, metal working plants, mill suppliers, and rail yards. Odours from a paint factory and a brewery poisoned the air.

Regardless of the merits of levelling LeBreton Flats, the fact that the NCC left the brown-field site fallow for more than a generation beggars belief. A succession of proposals was announced for the site with great fanfare only to submerge without a trace. In the late 1960s, the area was to become home of a new headquarters for National Defence. But the three-tower, $40 million project never got off the ground; cost considerations were the likely reason. Instead, National Defence moved to its current location on Colonel By Drive. Subsequent plans for the Flats included a highway interchange with a half-clover leaf, low-cost housing, a convention centre, a national aquarium, a railway terminal for a proposed high-speed train between Windsor and Montreal, and a theme park. While waiting for the NCC to decide, the Flats have been used for special events, including an open-air mass by Pope Jean Paul II in 1984, and performances by the Cirque du Soleil. The land has also been used as a site for hot-air ballooning and as a camping ground.

In the late 1980s, plans for the area focused on five competing concepts with beguiling but obscure names: “Consolidating the Capital,” “Symbolic Bridge,” “A Multi-use Node,” Creating an Urbane Capital,” and “An Agora for the Capital.” Each was assessed on their biophysical, social-cultural, and other characteristics. Under the winning “Agora” concept, the Flats would be populated with museums, offices, roughly 2,500 residential units, of which 1/3 would be social housing, and commercial buildings. There would also be ample green space, including a park (the agora), located in the centre of LeBreton Flats. The Ottawa River Parkway (now Sir John A. Macdonald Parkway) would be relocated to become an urban boulevard through the Flats.

This plan too stalled, in large part on a 1991 environmental study that detailed the various toxins found in the soil and groundwater of LeBreton Flats, a legacy from its industrial past. Before redevelopment could take place, measures would have to be taken to deal with high levels of benzene and other contaminants that had leaked into the soil from the paint factory, underground oil tanks, and waste disposal sites. Snow dumps had also lead to high levels of lead from vehicle emissions, and chloride in the groundwater. Dangerously high levels of methane from rotting household and municipal wastes used as infill were also found in the land reclaimed from Nepean Bay. The cost of remediation and clean-up, which included scrapping off and replacing the topsoil, had risen to more than $70 million by 2012.

LeBreton Flats, circa2010After more than 40 years of delay, the redevelopment of the LeBreton Flats finally got underway in 2003 with the construction of a new Canadian War Museum. Located close to the Ottawa River, the facility, which cost more than $135 million, opened its doors to the public in 2005. Its environmentally-friendly “green” roof is planted with self-sowing grasses found along the Ottawa River. The fields to the south and east of the Museum are currently used for summer festivals, such as Bluesfest.

In 2004, the NCC contacted developers regarding the construction of residential units on a large 11 acre (4.4 hectares) parcel of land. Only three developers, Minto, Alliance Prevel and Claridge, submitted expressions of interest. Controversially, when decision time came, Claridge, judged third on experience and design, was the only contender left standing. The other two had pulled out of the competition owing to changes demanded by the NCC which in their view had made the project nonviable. Since then, Claridge has built two 13-storey condominium towers on LeBreton Flats which some critics panned as “pedestrian.” A third phase consisting of “boutique-style stacked townhomes” is underway.

The LeBreton Flats odyssey is far from over. More residential units are planned though their timing will depend on market demand. The decision to build a light rail transit (LRT) system in Ottawa has also affected development on the Flats. On the positive side, LeBreton Flats will have its own stop, better linking the area to the rest of the city, and increasing its attractiveness to potential residents. On the negative side, the LRT project has prompted the NCC to reassess its approach to the Flats. In September 2014, the Crown Corporation abandoned its twenty-year old plans for mixed-use development for the area saying that they were out-dated and inconsistent with contemporary approaches to development and city needs. It now wants a “signature” attraction of regional, national, or even international significance. Ideas including a downtown hockey arena, or a new site for the Museum of Science and Technology. While the federal government supports this change in direction, it has also indicated that it has no money to finance development. The NCC has invited the private sector to submit proposals for 9.3 hectares of land south of the Parkway and west of Boothe Street. An additional 12.1 hectares might also be made available. The hope is that something could be approved by the NCC Board and the federal government by early 2016.