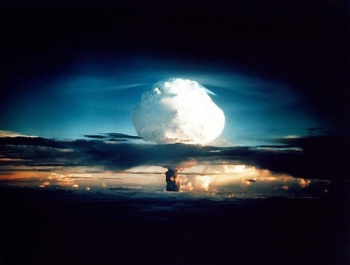 Tensions had been mounting between the Soviet Union and its Warsaw Pact partners and the United States and its NATO allies. In April 1961, some twelve hundred Cuban exiles, backed by the CIA and supplied with American arms and landing craft, had made a failed attempt to invade Cuba at the Bay of Pigs and topple Fidel Castro. The Cuban Communist leader had come to power two years earlier after having deposed Fulgencio Batista, the corrupt and repressive, American-supported dictator.

The following month, Canada tested its civil defence plans in the event of a nuclear war. In cities across the country, the wailing of more than two hundred sirens warned Canadians to take cover. The Canadian Emergency Measures Organization issued a booklet to households indicating what they could do in the event of a nuclear attack. Called The Eleven Steps To Survival, Canadians were told:

Step 3: Know the warning signal and have a battery-powered radio

Step 4: Know how to take shelter

Step 6: Know how to prevent and fight fires

Step 9: Know how to get rid of radioactive dust

Step 11: Have a plan for your family and yourself

In the introduction to the booklet, Prime Minister Diefenbaker stated: Your personal survival can depend on you following the advice that is given and the survival of many others may depend on how well you have heeded the advice contained therein. The government also provided plans on how to build a backyard bomb shelter.

Mid-August, East Germany began the construction of the Berlin Wall cutting off West Berlin by land, and denying an escape route to the West by East Germans seeking freedom. In early September, the U.S. military detected four, above-ground Soviet nuclear explosions. Subsequently, radioactive fallout, 320 times higher than background radiation levels, was detected in Ottawa. Federal Health Minister Jay Monteith warned that should such high levels of radiation be maintained, they “could well be a hazard to health.” At a state banquet in Moscow, Indian Prime Minister Nehru told Soviet Premier Nikita Khrushchev that it would be stupid to start a war. Khrushchev replied that the Soviet people did not want war but “could not look on calmly while Western powers make military preparations on a hitherto unparalleled scale.” With war rhetoric rising, Prime Minister Diefenbaker warned Canadians in early November that “war is not as improbable as we hope,” and that if comes, Canada will be a battleground. Earlier he had told the House of Commons that should there be an attack on Canada, he and his wife would not leave Ottawa for safety but would rather take cover in the bomb shelter at 24 Sussex Drive.

During the morning of Monday, 13 November 1961, unidentified but presumed hostile submarines were detected in large numbers in the North Atlantic and in the Hudson Bay. Soviet tanker aircraft were also detected near the Aleutians. The Canadian armed forces increased it level of military alertness at 8.30am EST. This was stepped up to the next level at 10.30am and yet again at 12.30pm, sending staff to emergency centres across the country. Troops left possible target areas. At 2.30pm, key government officials and senior defence officers, including Defence Minister Douglas Harkness, Health Minister Monteith, Defence Production Minister Raymond O’Hurley, and Justice Minister Davie Fulton, were dispatched to Camp Petawawa, 150 kilometres north-west of Ottawa that was to become the government back-up centre in the event of war. (The underground, bomb-proof base in Carp now known as the Diefenbunker, which was designed to shelter the Governor General, the Prime Minister, and other senior government and military leaders in the event of nuclear war, was still under construction.)

At 6pm, the Canadian military was placed on maximum alert. Shortly afterwards, NORAD (North American Air Defense Command) radar spotted 36 hostile airplanes heading towards Canada between Greenland and Ellesmere Island. Another 20 were detected off the Aleutian Islands in the Pacific. At 6.50pm, Prime Minister Diefenbaker and six Cabinet colleagues went underground at 24 Sussex Drive where they issued an Order-In-Council invoking the War Measures Act. Defence Minister Harkness was appointed Acting Prime Minister and given almost dictatorial powers to respond if necessary. Diefenbaker also approved the signal to alert unsuspecting Canadians to the deteriorating military situation and to take shelter. He also prepared to address the nation across all radio and television stations in a special broadcast of the Emergency Measures Organization.

At precisely 7pm, more than 500 sirens from coast to coast, 45 in Ottawa alone, began a steady three-minute wail, their strident call telling citizens that a nuclear attack was expected. By that point, more than 110 “penetrations” of the Distant Early Warning (DEW) Line in Canada’s far north had been detected as Soviet bombers streaked across Canadian territory at 600 knots per hour. At 7.10pm, the Ballistic Missile Early Warning System (BMEWS) gave Diefenbaker a fifteen-minute warning that a missile attack was underway. Air raid sirens across the country gave the “take shelter” warning, a three-minute rising and falling sound that announced a nuclear strike was imminent.

It total, two waves of Soviet bombers, the first of 150 aircraft, the second of 110 as well as two waves of missiles, mostly heading for U.S. targets, were detected. Fourteen Canadian cities were destroyed by five-megaton nuclear bombs, including Vancouver and Courtney in British Columbia, Edmonton and Cold Lake in Alberta, Fort Churchill, Manitoba, Frobisher, NWT, North Bay, Sault Ste Marie, and Welland in Ontario, Chatham, New Brunswick, Halifax, Nova Scotia, Goose Bay in Labrador, and Stephenville on the Island of Newfoundland. Ottawa was destroyed at 10.10pm, with the epicentre of the blast situated just north of Uplands Airport. Toronto and Montreal were hit at 10.45pm and 10.51pm, respectively. The Soviet attack on North America lasted until 4am the next morning. Some 30 U.S. cities were destroyed, including Detroit, hit by a ten-megaton bomb that also killed tens of thousands in neighbouring Windsor. 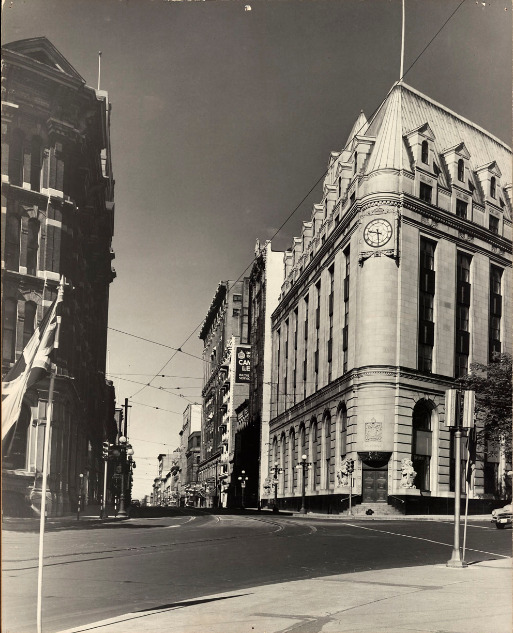 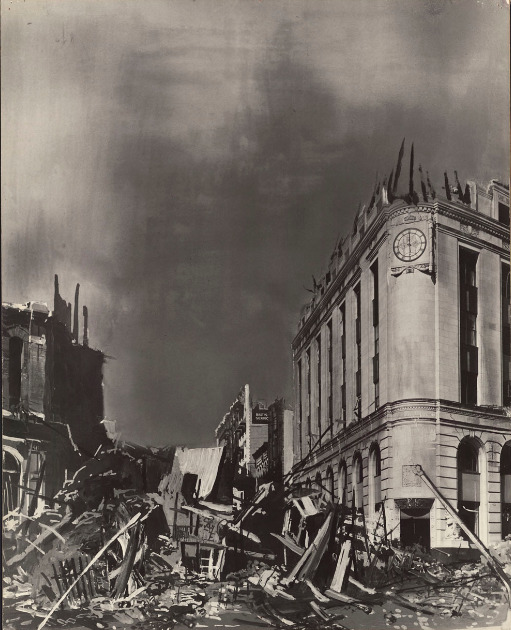 The corner of Sparks Street and Elgin Street, Central Post Office, c. 1961, before and after a nuclear attack on Ottawa, Canada Emergency Measures Organization, Government of Canada, Library and Archives Canada, Mikan 4717891 and 4717352.

The death toll was staggering. The Army Operations Centre at Camp Petawawa estimated Canadian dead at roughly 2.6 million, including Prime Minister Diefenbaker, with an additional 1.6 million injured, many critically. Fire, radiation sickness, and exposure was expected to claims hundreds of thousands of additional lives in coming days and weeks. In the Ottawa region, the death toll was placed at 142,000 dead, 61,000 injured and 30,000 experiencing radiation sickness. On the upside, 90,000 people had been rescued though many thousands remained trapped in burning buildings and debris. Emergency teams of soldiers and hundreds of thousands of volunteers fanned out across the country to help the survivors. Jack Wallace, the Deputy Director of the Emergency Measures Organization noted that while the Saint Laurence Seaway system had been knocked out at Montreal, Welland, and Sault Ste Marie, the railway service could be quickly restored. While casualties were high, over 14 million Canadians had survived the multiple attacks. He also estimated that one half to two-thirds of industry could be quickly made operational and one-half of hydro power was still in commission. There was also sufficient food to feed all Canadians. Canada had come through the nuclear attack severely damaged but intact, with a nucleus of a national government still functioning at Camp Petawawa where fallout was considered light.

Thankfully, this horrific scenario was just that…a scenario called Exercise Tocsin B-1961 that played out on 13 November 1961 as part of Canada’s test of its emergency civil defences. However, all the events described leading up to the test are factual. While the test may seem fanciful to today’s Gen. “Xers” and Millennials, for those who grew up in the 1950s and 60s, it was very real. The Cold War was a time of great worry and stress. Exercise Tocsin B-1961 was held exactly one year before the Cuban missile crisis when the world held its breath as the United States and the Soviet Union played a high-stakes game of “chicken,” where one false movement by either side could have led to a global nuclear holocaust.

Ottawa Citizen (The), 1961. “Tocsin B Alarm Goes Off Accidentally In Ottawa,” 13 November.