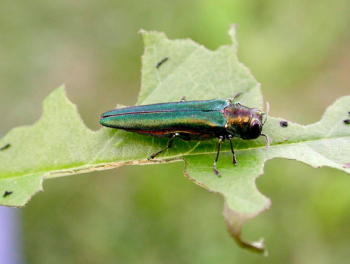 Something was wrong with the ash trees in the east end of Ottawa. Trees lining St Laurent Boulevard and Ogilvy Road near the Queensway were under stress, their upper canopies thinning, with wild growth appearing lower down their trunks. Sent out to investigate, the city’s Forestry Services discovered small “D” shaped holes on their trunks and branches along with strange serpentine tunnels that scored the wood immediately under the bark. On 25 July 2008, Ottawa City Council received the Forestry Services’ grim report—the emerald ash borer had arrived in the city.

Agrilus planipennis, a.k.a. the emerald ash borer, is a small, metallic-looking member of the beetle family. Measuring only about 8.5 to 14 millimetres in length and 3 to 4 millimetres in width, this attractive insect, sometimes referred to as a “jewel” beetle, is native to north-east Asia, including parts of China, Japan and Russia. Its larvae feed on the cambium of ash trees (genus fraxinus); the mountain ash (genus sorbus) is not affected. The cambium is the thin layer of cells found between the wood of a tree and its protective bark. On its inward side, the cambium produces sapwood which carries water and other nutrients up to the tree’s leaves, while on its outward side it produces the phloem which carries nutrients produced by the leaves through photosynthesis down to the roots. It’s this cambium layer that makes the annual growth rings in a cross-section of a tree truck.

In the spring, the adult female ash borers deposit their eggs on the bark or in cracks in the bark of infected trees. Up to as many as 90 eggs can be deposited by each female. After about a week, the larvae emerge and make their way to the cambium layer on which they feed. In the process, they make serpentine “galleries” through the cambium and sapwood. A serious infestation can girdle a tree, effectively disrupting the tree’s ability to draw nutrients and water up to its leaves, killing it in the process. The mature larvae pupate over winter with the adults emerging in mid-May or June from exit holes of about 4 millimetres in diameter. The adult males live for about two weeks, while the females survive a week or so longer. Adult ash borers are good flyers and can travel for up to one kilometre. The insects can also be disbursed through the movement of infected wood and wood products. 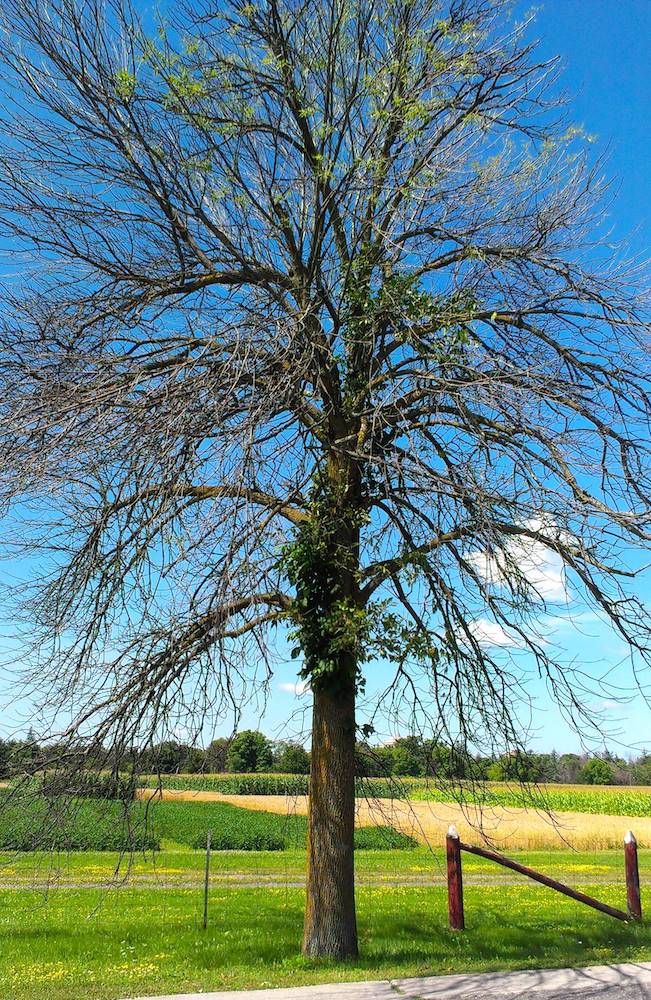 Dying Ash Tree on Ash Lane at the Central Experimental Farm, July 2014Trees attacked by the emerald ash borer typically die within a few years of being infected. In their natural range in Asia, the insect is considered a minor and episodic pest, with recent research showing that it is biologically controlled by at least three species of tiny, stingless wasps, Oobius agrili, Spathius agrili, and Tetrastichus planipennisi. These wasps, measuring only slightly more than one millimetre in length, parasitize ash borer larvae by laying their eggs on them. When the wasp larvae emerge, they eat the ash borer host larvae, killing them.

In the summer of 2002, the emerald ash borer was identified in several south-eastern counties of the U.S. state of Michigan as well as one county in bordering Ontario. It is believed that the insect was introduced, possibly as long as five years earlier, into North America through the port of Detroit in wooden packing used to protect goods transported by ship from China. Since then, the invasive and destructive insect has quickly spread, affecting countless ash trees throughout central United States, Ontario and into Quebec, apparently unimpeded by our cold winters.

The arrival of the emerald ash borer in Ottawa represented a major threat to the city’s urban forest as ash account for more than 25 per cent of trees in the Ottawa area, and up to as much as 40 per cent in parts of eastern Ontario. Ironically, many of the city’s threatened ash trees, fast growing and tolerant to air pollution, were planted during the 1960s and 1970s to replace dying elm trees, felled by Dutch elm disease. That arboreal epidemic was caused by a different alien invader, a fungus that also originated in Asia which was subsequently spread by host beetles throughout North America. A still-earlier imported blight killed off 99 per cent of eastern North America’s chestnut trees, once a mainstay of southern Ontario forests, at the beginning of the twentieth century.

Since the summer of 2008, the emerald ash borer has spread throughout the city despite municipal, provincial and federal efforts to control the pest through regulations that strictly control the movement of firewood from the affected areas, and encourage the removal of infected trees, and their replacement with different species. In some cases, systemic insecticides injected into a tree’s bark have also been applied to save trees. Despite these efforts, the emerald plague has continued its advance. Less than two years after being first identified in Ottawa, ash trees at the Central Experimental Farm came under attack leading to the felling of eighty-year old ash trees on Ash Lane to be replaced by maples, ginko bilobas, and oaks; Ash Lane was gone in all but name. In 2012, Andrew Haydon Park lost close to 1,000 of its ash trees. By 2013, dead and dying trees were everywhere, along streets, in neighbourhood playgrounds and schoolyards, and in city parks.

In June 2013, there was finally a small bit of positive news. The Canadian Food Inspection Agency gave its approval for the introduction of a biological control, enlisting the help of Spathius agrili, and Tetrastichus planipennis, two of the three parasitic wasps, in the battle to contain the ash borer beetle. While the wasps would not be able to eliminate the beetle, it is hoped that over the long run some kind of ecological balance could be restored. It remains to be seen whether this new approach will be able to save our remaining ash trees. Regardless, Ottawa’s landscape has been radically altered.