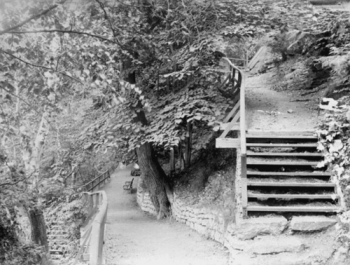 When visitors come to Ottawa, they naturally gravitate to Parliament Hill to view the magnificent neo-Gothic Parliament Buildings, to stroll in the surrounding gardens where statues and memorials to Canadian sovereigns and statesmen abound and, of course, to take in the stunning views across the Ottawa River towards Hull and the Gatineau Hills. One hundred years ago, the number two Ottawa tourist destination was Lovers’ Walk—a pathway that wended its way around the Parliament Hill bluff roughly half-way up the escarpment. Surrounded by a hardwood forest and flowering shrubs, including lilacs and honeysuckle, the pathway commanded splendid views of the Ottawa River, with benches for the weary or for the amorous. Visitors to this tranquil wilderness could easily forget that they were in the heart of Canada’s capital city. According to a 1920s’ guide book, anyone who has not taken a stroll there “has not seen all the charms of the capital. In fact, he has missed one of the greatest of them.” Fast forward to today, you would be hard pressed to find an Ottawa resident who has any knowledge about this once-famous pathway.

The history of Lovers’ Walk apparently dates back long before the arrival of the first Europeans to the Ottawa Valley. Accounts say that the pathway was used by Canada’s native peoples travelling along the southern banks of the Ottawa River. During the first half of the nineteenth century, raftsmen took this same route as a short cut moving to and from their homes in Lower Bytown and the timber chutes at the Chaudière Falls. Sometime after Confederation in 1867, the rough path was widened, decorative iron railings were fitted to protect users from falling, and staircases were installed at several points to give the general public ready access.

One story says that William Macdougall, the Minister of Public Works from 1867-69 in Sir John A. Macdonald’s first Dominion government, was responsible for upgrading the trail from a rough, dangerous track to a gentle path that even women dressed in the long gowns of the period could stroll along without fear of tripping. Macdougall, who was apparently a “hands on” type of Minister, stumbled upon the footpath when he was inspecting the construction of a ventilation shaft for the Centre Block on Parliament Hill.

Another story gives the credit for Lovers’ Walk to Thomas Seaton Scott, the Dominion Chief Architect from 1872-1881. Seaton was responsible for laying out the structured gardens that surround the Parliament Buildings as well as designing the Drill Hall on Elgin Street. According to this account, Seaton constructed the steps down from the formal gardens on top of Parliament Hill to allow the general public access to the wilder charms of the pathway.

Who actually came up with the name Lovers’ Walk is unknown. The first newspaper reference to this name appears in the Ottawa Daily Citizen in 1873. A visitor at about this time said that “no more appropriate name could be devised.” 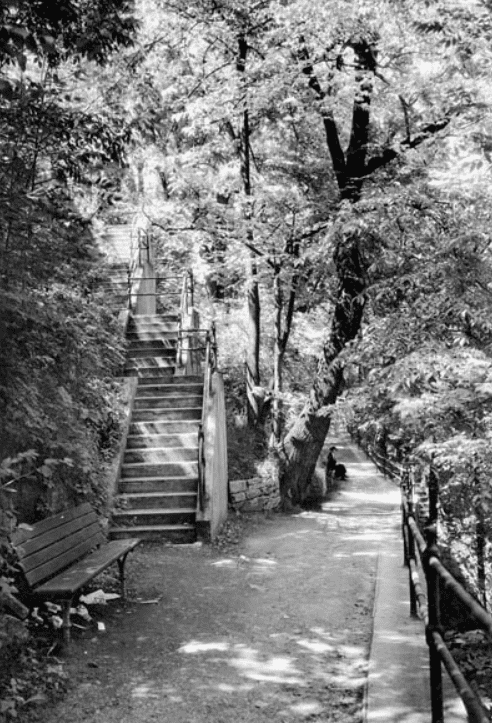 Steps down to Lovers’ Lane, Parliament Hill, Dept  of the Interior, Library and Archives Canada, PA-034227, circa 1920s.

In addition to tourists and Ottawa residents, the denizens of Parliament on top of the bluff also took advantage of the pathway, seduced by Lovers’ Walk’s winsome charms. Prime Ministers, Cabinet Ministers, Senators and ordinary Members of Parliament were all known to take breaks from the hard work of politicking to refresh themselves with a stroll through its sylvan beauty. Lovers’ Walk also attracted bird watchers. One avid amateur naturalist in the early 1930s spotted 59 different species from the pathway.

Lovers’ Walk could be accessed from either side of the Parliament Buildings. On the eastern side, there was a flight of stairs leading from roughly where the equestrian statue of Queen Elizabeth stands today. Another flight of stairs started from a location behind the Bytown Museum close to the locks on the Rideau Canal. On the western side of Parliament Hill at the end of Bank Street, behind the old Supreme Court of Canada, which was demolished in 1956, strollers entered the Walk through a stone gateway. Midway on the path there was a lookout with benches for those wanting to stop to rest or admire the views. There was also a lion-headed water fountain to refresh the thirsty. Unfortunately, strollers and lovers sometimes came across less-savoury elements who also frequented Lovers’ Walk. In 1875, there was a call for police to exclude “roughs” who amused themselves by throwing burrs onto ladies’ dresses. It was also advisable not to pick the flowers. In 1931, Mrs Pamela Cummings of 726 Cooper Street was fined $3 plus $2 court costs for stealing lilacs.

Lovers’ Walk was closed in the winter owing to snow and ice that made walking dangerous, but re-opened each spring, typically in May, once conditions were suitable. Given the steep nature of the hillside, there were frequent rockslides that were dealt with by the Department of Public Works. At the start of the First World War, the pathway was closed to the public and was patrolled by the Dominion Police. The authorities feared that German saboteurs could use Lovers’ Walk to access the ventilation shafts that aired the Centre Block. By cutting the iron protective grills, saboteurs could potentially plant explosives under the building and blow up Parliament. These precautions were discontinued after the Centre Block was destroyed by fire in February 1916.

By the 1930s, Lovers’ Walk was becoming less popular. With the Depression at its peak, the pathway had become the haunt of panhandlers and the homeless, and was considered unsafe for casual strollers. The Ottawa Journal reported that “the dregs of humanity would pan handle the lovers, even seek to molest them.” A “jungle” of tin-patched shacks built by homeless men sprung near the path close to the western entrance. The eastern end, close to the Canal locks, was described as the haunt of drunks whose wild shouts could be heard from men drinking denatured alcohol. Regular police patrols and RCMP efforts to dismantle the shacks did little. There were also dark allegations of immorality.

In the winter of 1937-38, two landslides washed out more than sixty feet of Lovers’ Walk. It never officially re-opened. On 14 May 1938, the Ottawa Citizen reported that to repair the pathway would cost over $30,000. Although the Senate Standing Committee on Public Buildings and Grounds, chaired by Cairine Wilson, recommended that the Department of Public Works take steps to stabilize the cliff face and reopen Lovers’ Walk, the repairs were not undertaken. During a time of depressed economic conditions, $30,000 was simply too much.

Besides landslides and the presence of “undesirables,” another possible factor behind the closure of Lovers’ Walk was concerns about Government liability. In 1933, a young boy had climbed over a gate when Lovers’ Walk was closed for the winter. He slipped on the ice, fell 50 feet, and was lucky to get away with only a broken femur. His father unsuccessfully tried to sue the government for his doctor’s bill. In 1937, a man, who had been sitting on a guard railing, broke his spine when he lost his balance and plunged down the cliff.

Some say that it was Prime Minister William Lyon Mackenzie King who ordered the closure of Lovers’ Walk. However, another account says that King had wanted to keep it open and that it was only following extensive discussions with the RCMP, Public Works, and the Speakers of both the Senate and the House of Commons that the decision to close it was reluctantly taken. High barricades were installed at both ends to stop people from using the path now deemed unsafe.

By the 1950s, Lovers’ Walk was a “desolate ruin of crumbling masonry, rusted and broken iron guardrails and rotten wooden shoring.” What was left of the pathway was overgrown and narrowed by erosion. Empty bottles, and other refuse littered the place—evidence that the deteriorating ruins of Lovers’ Walk remained a refuge for the homeless sleeping rough during the summer months. After an intoxicated painter fell to his death in 1960, a coroner’s jury recommended that what was left of the pathway be destroyed to ensure public safety.

Nothing was done. The area got a fearsome reputation, especially at night. By the late 1960s, secretaries and clerical staff working late on Parliament Hill were fearful of using the stairs, which cross Lovers’ Walk, to get to the parking area known as “the Pit,” despite, according to the Ottawa Journal, “routine flushing out by the RCMP foot patrols of winos, ‘rub-a-dubs,’ vagrants and, more recently, hippies from their dormitory-pad along Lovers’ Walk.” In July 1968, ex-MP Herman Laverdière was stabbed and robbed by hooligans when he went to investigate a scream that had emanated from the wooded area after he left his office at 11 pm.

Notwithstanding the increasingly bad press, there were attempts during the 1960s to restore Lovers’ Walk to its former glory. Members of all major parties championed the pathway at various times. But with the price tag rising steadily, the government in power always demurred owing to the difficulty in controlling erosion on the escarpment. In the 1980s, when Jean Pigott was Chair of the National Capital Commission, there was another look at restoring the pathway. Again, it was deemed too expensive. In 2000, the Department of Public Works looked at rebuilding the pathway given the historic nature of Lovers’ Walk and the magnificent views of the Ottawa River. Again, the issue was put on the back burner.

Most recently, LANDinc was commissioned by Public Works to develop a strategy “to restore and reforest the slopes [of Parliament Hill] to ensure long-term sustainability.” Over time, invasive species, including the lilacs, would be removed and replaced by endemic shrubs and trees. In 2014, Graebeck Construction won a $4.78 million contract to rehabilitate the western slope of Parliament Hill and the perimeter wall. There was, however, no mention of re-opening Lovers’ Walk to the general public.