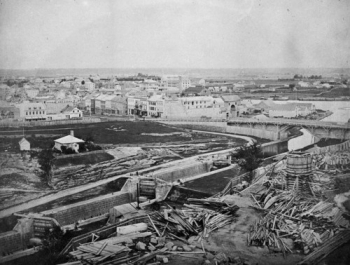 South end of Major’s Hill, looking from the construction site on Parliament Hill, circa 1860. By this time, Major’s Hill had been largely denuded of trees.

One hundred and seventy years ago, Ottawa, was a rude, crude, muddy shanty-town, newly hacked out of the wilderness to be the northern terminus of the Rideau Canal linking Lake Ontario to the Ottawa River. There were few amenities for its roughly ten thousand citizens, many of whom had settled in the area first to build the canal in the late 1820s, and later to exploit the surrounding forests for their valuable lumber for sale to markets in Britain and the United States. But things began to change once Ottawa was selected as the new capital of the Province of Canada in 1857. Lacking the facilities worthy of a capital, work began in 1859 on constructing Canada’s magnificent Gothic-revival parliamentary and governmental buildings on what was then called Barrack Hill, a bluff overlooking the Ottawa River, and is now known as Parliament Hill. Thoughts also turned to beautifying the town, as well as to providing its burgeoning population with satisfactory, outdoor recreational facilities. As early as 1860, a petition was circulated requesting the Provincial Government to convert Major’s Hill, located to the east of Barrack Hill, into a park for Ottawa’s residents. The petition failed. Despite this setback, the hill was unofficially used as a recreational area, hosting weekend concerts by regimental bands. It was also the site for a huge party and bonfire to welcome the birth of the Dominion of Canada on 1 July 1867.

Initially the hill was called Colonel’s Hill, after Col. John By, the supervising engineer responsible for building the Rideau Canal whose residence once stood on the property. (The foundation of the home, which was destroyed by fire in January 1849, is still visible today.) However, after his deputy, Major Daniel Bolton, moved into the home after Col. By was recalled to England in 1832 to answer for cost over-runs in building the canal, the land became known as Major’s Hill. This name stuck. Back in those early years, the hill was thickly forested, and was known for its great flocks of pigeons, most likely the now extinct passenger pigeons.  The species migrated in their millions in eastern North America during the nineteenth century, but was sadly exterminated by the early twentieth century through over-hunting and habitat destruction. According to a letter that appeared in the Ottawa Citizen in 1882, sportsmen hunted the pigeons with “every description of flintlock from the Queen Anne to the blunderbuss.”

In 1864, Ottawa’s Mayor Dickenson sounded out the Provincial Government about the city acquiring the land for a public park “for the future Capital of Canada.” (Government—politicians and civil servants alike—was still based in Quebec City awaiting the completion of their new quarters on Parliament Hill.) This petition, like the preceding one, fell on deaf ears. The Provincial Government was not willing to part with Major’s Hill, seeing it as the possible location for the Governor General’s residence. Plans for such a building on that site had been approved in 1859 but ultimately were never used owing to cost over-runs in constructing Canada’s Parliament buildings. Instead, the government chose to rent, and later to buy, Rideau Hall.

In 1873, the Ottawa City Council again approached the now Dominion Government of Prime Minister Alexander Mackenzie about the possibility of acquiring Major’s Hill as the site for a new city hall, or as a public park. The former idea met popular resistance. But this time the idea of a park found traction. On 21 August 1874, the Dominion government accepted a memorial from the City Council under which the city of Ottawa would lease Major’s Hill for the purpose of a public park, agreeing to “protect the trees and shrubberies thereon,” and to “make roads, place seats, plant trees, erect fences” for the duration of the lease. Council also agreed to hire a full-time caretaker for the grounds, and to build and maintain a road, later known as Mackenzie Avenue, between Major’s Hill and the rear line of lots on the western side of Sussex Street (later Drive). The Dominion Government retained its right to tip excavated material from the Parliament grounds into any holes or waste areas on Major’s Hill. As well, the Dominion Government could take back the park at any time should it have need of the land without compensation being paid to the city.

The following year, Ottawa’s City Council set aside $10,000 (a huge sum in those days) for the development of the park under the direction of Robert Surtees, the city engineer, with work beginning in earnest in the summer of 1875 after the city’s plans had received the Dominion Government’s approval. Initial efforts on levelling the Hill actually commenced prior to receiving the official go-ahead. With the economy in recession, City Council authorized Surtees to commence the levelling of Major’s Hill “in order to give employment to our labouring classes, to enable them to prepare for the hard winter, which, to all appearances, is before them.”  Subsequently, perimeter fences and gates were erected, and a formal, semi-circular carriage way along with a number of pathways were created inside the park. Low spots were filled in using clay excavated from Parliament Hill, and an artificial pond was created at the northern end of the park. Fountains were installed, and mounted cannon were placed for decoration. On the horticultural side, a variety of trees were planted, including European sycamore, ash, elm, basswood, maple, and tamarack. Flower beds were also laid out. 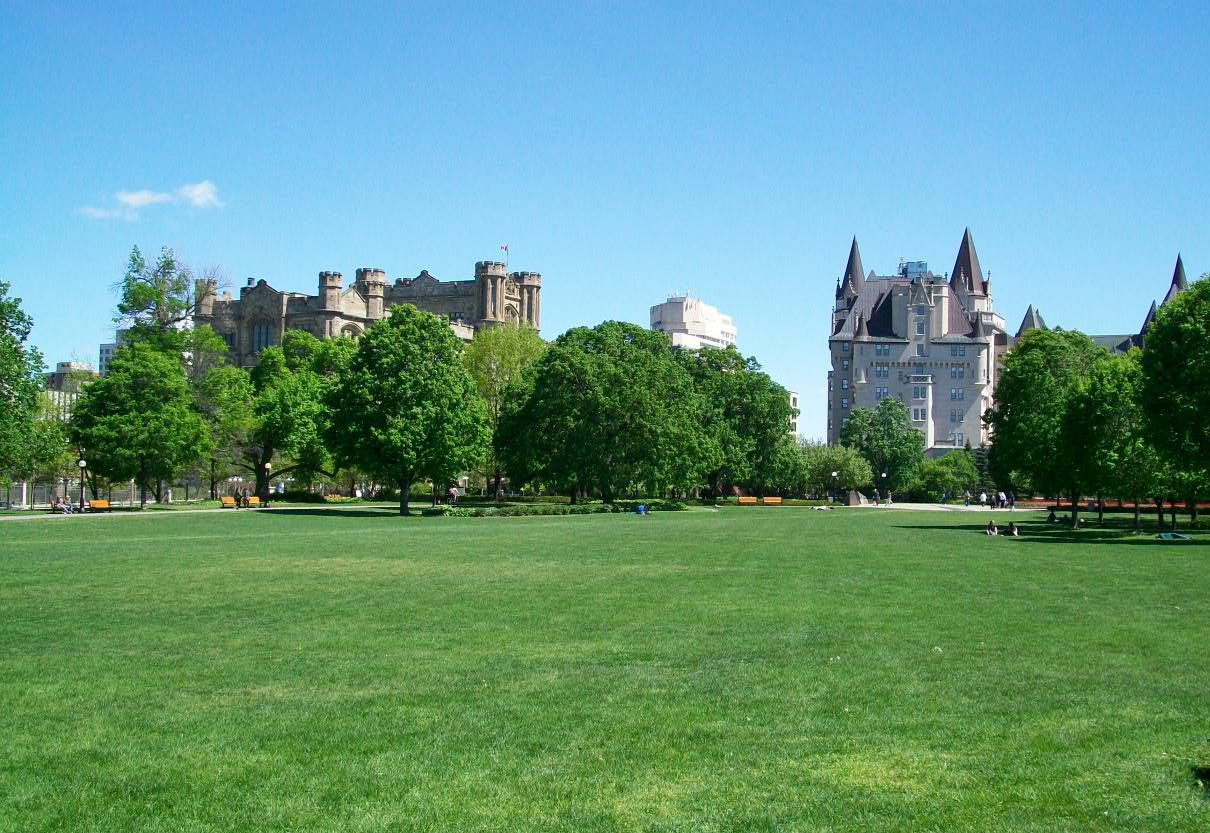 Major’s Hill Park, sometimes referred to as Dominion Park, became a major attraction. However, it seems vagrancy and vandalism were persistent problems. In 1878, City Council passed a by-law excluding from the Park “all drunken or filthy persons, vagrants and notoriously bad characters.” Other rules including a prohibition against driving or riding any horse at an immoderate rate, playing football, throwing stones, or shooting with bow and arrow or firearm. People were also prohibited from letting animals, including horses, cattle, swine, or goats, to run free or feed in the park. There was also an explicit prohibition against “carrying any dead carcase, ordure, filth, dust, stone, or any offensive matter or substance.” On the positive side, the playing of games and the selling of refreshments were permitted with permission, though the regulations stressed that the latter would not be permitted “on the Sabbath Day on any pretense whatsoever.”

After spending some $35,000 over the ten years, the cost of maintaining the park was deemed too large, leading the City to hand back the land to the Dominion Government in 1885. Fortunately, the Dominion Government conserved the Hill as a park. Since then, it has been maintained by various federal departments or Crown agencies, including the Department of Public Works, the Ottawa Improvement Commission, the Federal District Commission and, today, the National Capital Commission.

Being a valuable piece of real estate located in the heart of the city, stretching originally from Rideau Street in the south to Nepean Point in the north, Major’s Hill Park was coveted by many as a desirable building site. After the aborted attempt by the City of Ottawa to construct a new city hall on Major’s Hill during the 1870s, consideration was given in 1901 to building a national museum there in a style that would “harmonize” with the Parliament buildings a short distance away. Fortunately, this idea was not approved. However, a few years later in 1909, the Dominion Government under Sir Wilfrid Laurier controversially sold the southern portion of the park to the Grand Trunk Railway (GTR) for the then huge sum of $1 million to build a magnificent hotel—the Château Laurier. The hotel and Union Station railway terminal also built by the GTR on the opposite side of Rideau Street were key elements in Prime Minister Laurier’s plan to make Ottawa the “Washington of the North.” The proceeds of the land sale went to the Ottawa Improvement Commission to develop Nepean Point.

In 1888, the park received its first statue, that of a uniformed guardsman wearing a bearskin hat with his head bowed in mourning and his rifle reversed. It was erected to commemorate the deaths of Ottawa-born Privates W.B. Osgood and J. Rogers, members of the Sharpshooter’s Company who were killed at the Battle of Cut Knife Hill three years earlier in the Riel Rebellion in western Canada. This memorial, which was unveiled in the presence of Prime Minister Sir John A. Macdonald, his Cabinet, as well as Ottawa’s Mayor and other members of city council, was located close to the southern entrance to the park. When that part of the park was sold to the GTR, the statue was relocated to Elgin Street in front of the old city hall that burnt to the ground in 1931. When the National Arts Centre was constructed on that site in the late 1960s, the statue was moved again, this time to outside the Cartier Street Drill Hall where it stands today.

Statue of Colonel By erected in 1971.

In 1971, a statue of Colonel By, sponsored by the Historical Society of Ottawa, was erected in the park as a fitting tribute to the man most responsible for the building of the Rideau Canal, and the founding of the city of Ottawa. The statue by the sculptor Joseph-Émile Brunet, which stands on a granite plinth, portrays the man in his Royal Engineer uniform looking over the Rideau Canal towards the Parliament buildings.

Today, Major Hill’s Park remains as integral part of Ottawa life, offering downtown workers and tourists alike a welcome, verdant space in the heart of the city to rest and play. As was the case almost 150 years ago, Major’s Hill continues to be the focus of city events and celebrations, in particular the annual Canada Day festivities.

City of Ottawa, 1864. “Council Minutes,” Petition by Mayor M.K. Dickenson address to the Commission of Crown Lands, re: possible acquisition of Major’s Hill for a public park,” 18 June.

——————, 1974. “Memorial presented to His Excellency to take possession of Major’s Hill and covert the Hill into a park for the use of the public,” 21 August.

South End of Major’s Hill, circa 1860, looking from the Parliament Hill construction site. Major’s Hill, located, on the far side of the Rideau Canal, has been largely denuded of trees, photo by Samuel McLaughlin, Library and Archives Canada, c-000601.