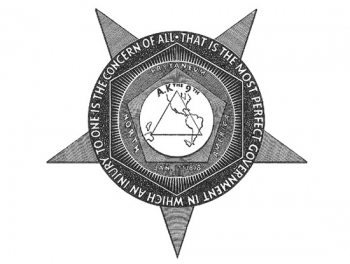 Emblem of the Knights of Labor

For the majority of people in Canada during the nineteenth century, life was hard. If you managed to avoid the myriad of killer diseases that prematurely snuffed out the lives of many, you could look forward to long hours of backbreaking work, regardless of whether you lived on a farm, or in one of Canada’s growing urban centres, such as Ottawa. In the sawmills and lumber yards of the Chaudière, the typical work day started at 6am and finished at 6pm, with an hour off for dinner; often people were forced to work much longer. Sunday was the only day of rest. Wages were low. According to an 1886 Royal Commission, domestic servants earned $6-8 per month, with room and board. Adult male workers at John R. Booth or Erskine Bronson’s sawmills brought home $1.00-1.50 per day, while women doing piece work in Ezra B. Eddy’s match factory in Hull could look forward to the munificent income of $0.35-0.75 per day. Boys and girls earned a pittance. Fortunately, prices were much lower than today. Very roughly, a weekly wage of $7.00-$9.00 might be equivalent to $150-200 per week today. But work was often seasonal; the sawmills and lumberyards of the Chaudière closed during the winter.

Working conditions were also poor. Accidents on the job maimed or killed many each year at a time when there was no workmen’s compensation. If you couldn’t work, you weren’t paid. Match workers, usually women or girls called allumettières, faced the horrible prospect of contracting phossy jaw, the colloquial term for phosphorus necrosis, through their exposure to white phosphorus used to make match heads. Phossy jaw caused terrible jaw abscesses, organ failure, brain damage, and, ultimately, death. Respiratory disease was rampant among lumber workers who laboured in poorly-ventilated, dusty sawmills. Sawdust, dumped into the Ottawa River, polluted the water on which residents relied. In the cramped, unhygienic, wooden shanties constructed on LeBreton Flats and in Hull close to the Chaudière mills and lumberyards, typhoid and other waterborne diseases flourished.

In the late nineteenth century, mutual aid societies, co-operatives, and unions emerged with the objective of improving the lives of working people, a development encouraged by the passage of the Trade Unions Act of 1872 by the government of John A. Macdonald; hitherto, union activity had been viewed as illegal conspiracy. Early unions active in Ottawa included the Canadian Labour Protective Association (1872) and the Canadian Labour Union (1873). Also prominent were the Knights of Labor, an American union and political movement that had begun in 1869 as a secret society. Although the movement had its dark side in the United States, where it was involved in anti-Chinese riots in the west, it was progressive in other respects, supporting gender equality, and equal pay for equal work. It also welcomed black members, though it condoned segregation in the U.S. south. By the 1880s, it had hundreds of thousands of members, and had opened branch assemblies in Canada, including in Ottawa and Hull, despite opposition from the Catholic Church.

The Knights of Labor were prominent in the great Chaudière strike that began on 14 September 1891. For the next month, lumbermen and sawmill workers staged an impromptu and illegal labour walk-out over a pay cut unilaterally imposed by the lumber barons. The strikers also wanted a reduction in their long working hours. While strikes were legal back in those days, six months’ notice had to be provided to management. Napoléon Pagé, a journalist who had started the Hull assembly of the Knights known as the Canadienne, was a prominent strike leader, though the Knights of Labor never endorsed the strike given the legal requirements to call a walk-out; they officially favoured arbitration. Nonetheless, Pagé’s newspaper, Le Spectateur, became the voice of the striking workers. Also prominent among the leadership of the mill and lumber workers was J. W. Patterson, head of the Ottawa Trades and Labour Council, and Napoléon Fateux (or Fauteux). Fateux, a mill worker, was a particularly effective leader, counselling restraint and peaceful assembly. He warned against mixing strike activity with alcohol, and urged older workers to curb young hotheads.

1891 was a bad year for the Canadian lumber industry. Important markets in Britain and South America were weak owing to a global economic recession; the previous year, an international financial crisis had erupted when Baring Brothers, an important British banking house with a global reach, almost collapsed owing to huge losses on its investments in Argentina. The company was famously rescued by the Bank of England. In response to weak demand and low lumber prices, the Chaudière lumber barons cut the weekly wages of sawmill workers by 50 cents. They also failed to live up to an earlier promise to reduce the work week to ten hours. When George Pattee refused a demand from workers at the Pearly & Pattee Lumber Company to restore the 1890 wage rate, on the grounds that he was only following the policy set by the lumber industry, his workers struck. Quickly, workers at other sawmills and lumberyards downed tools. At its greatest extent, some 4,000 workers had walked off the job—a huge proportion of Ottawa-Hull’s population, which perhaps totalled 50,000 at that time. Large public meetings were held in both Hull and Ottawa, attracting many thousands of people.

The strike was marred by violence and intimidation on both sides. On 15 September, more than two thousand workers marched from the wharf opposite the Booth mill in Ottawa across the Union Bridge to the Eddy match factory. There, the strikers confronted Ezra Eddy himself and other managers. A man, identified by the sobriquet “Red Moustache” violently kicked Eddy in the stomach before the mob dispersed. Later that same day, C.B. Wright, a sawmill owner, told a delegation of strikers that he was prepared to defend his mills “at the rifle muzzle if necessary.” Subsequently, Mr. Ruggles Wright fired blank rifle shots at workers in an attempt to intimidate them. In the ensuing affray, C.B. Wright was injured. There was more violence at the Mason family mill, where the father was roughed up, and his two sons, William and George, were cut by thrown stones. 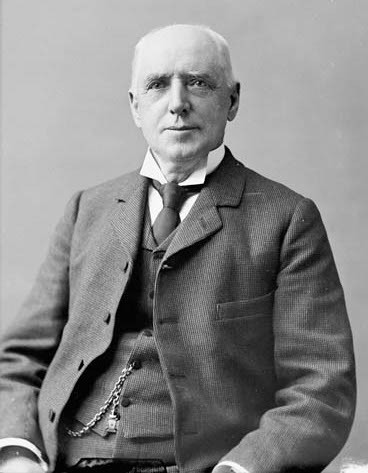 Ezra Eddy, 1827-1906, Owner of E.B. Eddy Company and sometime Mayor of Hull, Quebec
Library and Archives Canada, MIKAN no. 3468801Ezra Eddy, who was also the mayor of Hull, persuaded two justices of the peace to call out the militia. Two companies of the Governor General’s Foot Guards and two companies of the 43rd Battalion were called up to report to the Drill Hall at 5am on 16 September. The part-time troops, who were mostly civil servants, were armed with bayonets and live ammunition, though their commander, Lt-Col. Anderson, warned them not to take offensive measures without the command of their officers. The soldiers marched from the Drill Hall to Eddy’s in Hull, where two companies were deployed to avert trouble; the remaining two companies were stationed at the Hurdman sawmill. Fortunately, nothing happened. The strikers remained peaceful, and the soldiers were quickly demobilized after a workers’ delegation, which included Napoléon Fateux and J. W. Patterson, convinced Ezra Eddy that the troublemakers were not mill men, but outsiders. The workers’ delegation also promised to assign men to protect private property.

This was not the end of the violence, however. At the end of the month, there was a serious clash at the Perely & Pattee Company when strikers attempted to stop lumber shipments leaving the mill. Chief McVeity of the Ottawa police force and his men responded with batons “in a lively style,” according to The Ottawa Evening Journal. Striking workmen responded by throwing stones and sticks. Serious injuries were averted by the timely arrival of Napoléon Fateux who succeeded in restoring peace. The ferocity of the police response led public opinion, which already broadly supported the strikers, to swing even more in their favour.

Church, civic groups, small merchants, and individuals contributed money and goods to help families of the strikers. At the peak, more than 200 families were being helped daily. Special shops for strikers were established in Place du Portage in Hull and in LeBreton Flats. Strike relief funds were also provided by other unions, both in the Ottawa area and outside, though the amounts raised were small.

By early October, cracks in the owners’ façade were beginning to show, especially after an attempt to use scab labour brought in from Pointe Gatineau failed when striking workers persuaded strike breakers to desist. As one brought-in worker explained, it was “better to stop work and live a little longer.” On 3 October, work resumed at the Hurdman mill in Hull. While the owners had not budged on pay, they instituted a ten-hour work day.

But the workers were also at the end of their tether. On 12 October, more than 1,100 men returned to work on the old terms; that is to say, no raise and no ten-hour day. More followed. As the Journal put it, “men were, with scarcely an exception, heartily weary of hanging around doing nothing, with empty pockets, on the threshold of winter.” Although most mill owners had provided no concessions, rumours of change were rife. The following day, Perely & Pattee reversed the 50 cent reduction on the face-saving grounds that the men had returned to work of their own free will. The other lumber companies quickly followed suit.

By the time the strike ended, at least 1,000 experienced millworkers and lumbermen, short of money, had left Ottawa-Hull. Some 600 went to the Saginaw region in Michigan, which had its own lumber industry. Consequently, the Chaudière lumber companies had difficulty in quickly restoring full operations. With the balance of power shifting towards the workers, the ten-hour work week was finally implemented in 1895.