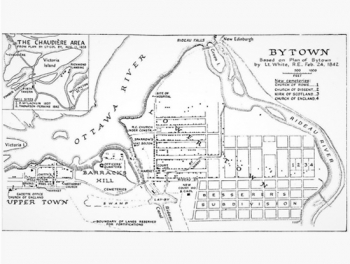 Map of Bytown, 1842, Bytown or Bust. Note the Lay-By (Canal Basin) in the lower centre of the map on the Rideau Canal. The By-Wash can be seen running north east from the Lay-By to the Rideau River. Barracks Hill will become Parliament Hill in the 1860s.

Readers may be surprised to learn that the Rideau Canal of the twenty-first century is considerably different from the Rideau Canal of the nineteenth century. In the old days, the Canal was very much a gritty, working canal. While it had its share of pleasure boats that plied its length, commerce was its main function. At its Ottawa end, barges, pulled by horses and men along canal-side tow paths, were drawn to warehouses that stretched from the Plaza at Wellington Street to the Maria Street Bridge (the predecessor of the Laurier Avenue Bridge). Lumber, coal and other materials were piled high along its banks awaiting delivery. Consequently, the Rideau Canal was anything but a scenic port of entry into the nation’s capital. Later, railroads and train sheds replaced the warehouses on the eastern side when the Central Depot, the forerunner of Union Station (currently the Ottawa Conference Centre and soon to be the temporary home of the Senate), opened in 1896. While practical, this was not an aesthetic improvement.

The quality of the Canal’s water during the late nineteenth century was also considerably different than that of today. While we sometimes complain about the turbid nature of the water and the summertime weeds that choke stretches of the waterway and parts of Dow’s Lake, this is nothing compared to the complaints of residents of the 1880s. Then the Canal literally stank. The sewer that drained the southern portion of Wellington Ward, the neighbourhood located between Concession Street (Bronson Avenue) and Bank Street flowed into the Canal at Lewis Street. The smell was particularly bad in spring when the effluent that had entered the Canal through the winter thawed. Reportedly, the stench of festering sewage was overpowering. So bad were the conditions, the federal government forced the municipal authorities to fix things. After considerable delay, a proper sewer was constructed. 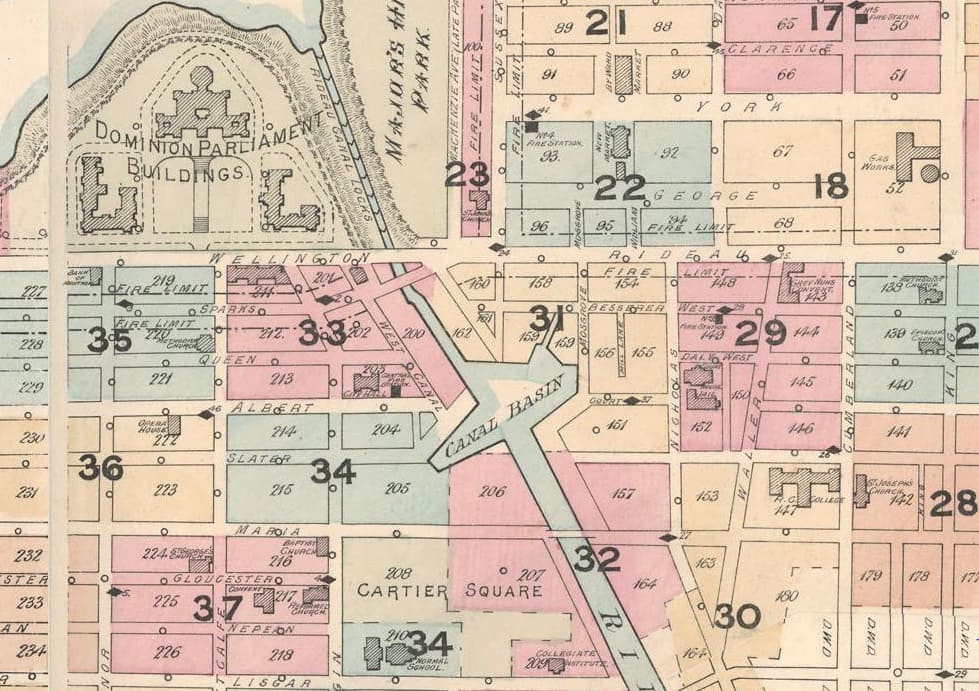 Detail of 1888 Map of Ottawa, City of Ottawa Archives. Note the Canal Basin. By now, only a rump of the By-Wash remained.The other not so delightful feature of the waterway was its flotsam and jetsam. Stray logs—a hazard to navigation—was the least of the problem. Prior to the first annual Central Canada Exhibition held in Ottawa in 1888, one concerned citizen pointed out the many nuisances to be found by boaters on the Canal. These included several carcasses of dead dogs floating in the Deep Cut (that portion of the Canal between Waverely Street and today’s city hall) and a bloated body of a horse bobbing in the water opposite the Exhibition grounds. The citizen also groused about the “vulgar habit” of people swimming in the Canal without “bathing tights.” He didn’t comment on the advisability of canal swimming given the horrific water quality.

The physical geography of the Rideau Canal was also different back then. Patterson’s Creek was much longer in the nineteenth century than it is today; its western end became Central Park in the early twentieth century. There was also Neville’s Creek that flowed through today’s Golden Triangle neighbourhood and entered the Canal close to Lewis Street. The Creek, which was described as a cesspool in the 1880s, was filled in during the early twentieth century.

But the biggest difference was the existence of a large canal basin located roughly where the Shaw Centre and National Defence are today on the eastern side of the Canal and the National Arts Centre and Confederation Park are on the western side. This basin, which was lined with wooden docks, was used for mooring boats, turning barges, and picking up and delivering cargo and passengers. 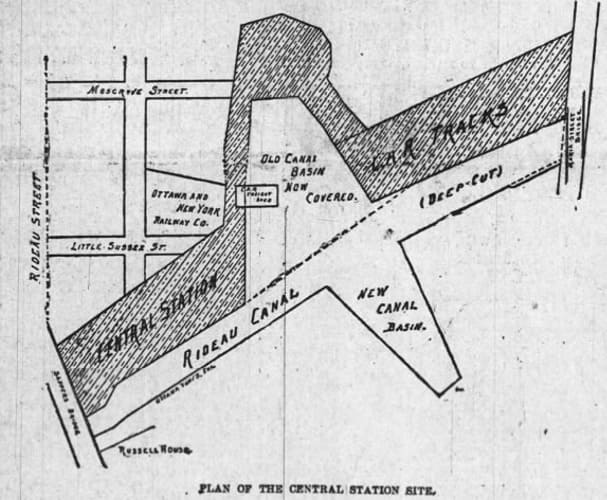 Diagram of the Rideau Canal and the covered eastern Canal Basin, 1897
The Ottawa Evening Journal, 30 October 1897.Before the Canal was constructed, the canal basin was originally a beaver meadow from which a swamp extended as far west as today’s Bank Street. Following the Canal’s completion in 1832, which included digging out the basin, a small outlet or creek called the By-Wash extended from the north east side of the basin. It was used to drain excess water from the Canal. Controlled by a sluice gate, the By-Wash flowed down Mosgrove Street (now the location of the Rideau Centre), went through a culvert under Rideau Street, re-emerged above ground on the northern portion of Mosgrove Street, before heading down George Street, crossing Dalhousie Street on an angle to York Street, and then running along what is now King Edward Street to the Rideau River. In addition to controlling the Canal’s water level, the By-Wash was used by Lower Town residents for washing and fishing. In 1872, the City successfully petitioned the federal authorities who controlled the Rideau Canal to cover the By-Wash. It was converted into a sewer with only a small rump remaining close to the canal basin that was used as a dry dock.

Detail of Map of Ottawa, circa 1900, City of Ottawa Archives. Note that the eastern Canal Basin has disappeared.Big changes to the canal basin started during the last decade of the nineteenth century. John Rudolphus Booth, Ottawa’s lumber baron and owner of three railways, the Ottawa, Arnprior & Parry Sound Railway (the O.A. & P.S.), the Montreal & City of Ottawa Junction Railway, and the Coteau & Province Line Railway & Bridge Company (subsequently merged to form the Canadian Atlantic Railway–CAR), received permission from the Dominion government to bring trains into the heart of Ottawa. Hitherto, his railways provided service to the Bridge Street Station in LeBreton Flats and to the Elgin Street Station, both a fair distance from the city’s centre. In early March 1896, Booth, through his O.A. & P.S. Railway, acquired from the government a twenty-one year lease for the
east bank of the Rideau Canal from Sapper’s Bridge (roughly the location of today’s Plaza Bridge) to the beginning of the Deep Cut for $1,100 per year “for the purpose of a canal station and approaches thereto.” Lease-holders of properties between Theodore Street (today’s Laurier Avenue East) and the canal basin were told to vacate. After building a temporary Central Depot at the Maria Street Bridge on the Theodore Street side, Booth subsequently extended the line across the canal basin to a new temporary Central Station at the Military Stores building at Sappers’ Bridge.

Initially, the railway crossed the basin on trestles, leaving the basin underneath intact while Booth dredged the western side of the canal basin and built replacement docks—the quid pro quo with the government for removing the eastern basin’s docks. It seems that the government was reluctant to allow Booth to fill in the eastern portion of the basin until the western portion had been deepened, fearing that any unexpected rush of water might be larger than the locks could handle leading to flooding. By mid-March 1896, 75 men and 25-35 horses were hard at work excavating the site. The Central Depot at Sappers’ Bridge was completed in 1896, and was promptly the subject of dispute between Booth and his railway competitors who also wished to use a downtown station. There was rumours that if the Canadian Pacific Railway could not come to terms with Booth, it would build a railroad on the western side of the Canal with a terminus on the other side of Sappers’ Bridge across from the Central Station. Fortunately, with government prodding an accommodation was made. Initially covered over with planks, the western portion of the Canal Basin was subsequently filled in. A new Central Station, later renamed Union Station, opened in 1912.

Rideau Canal, circa 1911. The western Canal Basin is on the left. Union Station and the Château Laurier are under construction.
Department of Mines and Technical Surveys, Library and Archives Canada, PA-023229.

If the eastern Canal Basin was sacrificed to the railway, the western Canal Basin was the victim of the automobile. This time, the Federal District Commission (FDC), the forerunner of the National Capital Commission, was responsible. Consistent with its plan to beautify the nation’s capital, the FDC in cooperation with the municipal authorities decided to extend the Driveway from the Drill Hall to Connaught Plaza (now Confederation Plaza) at a cost of $150,000. These funds also covered the construction of two connections with Slater Street, a subway at Laurier Avenue, new light standards, landscaping, and a new retaining wall for the Rideau Canal. Again, firms with warehouses at the Canal Basin, including the wholesale grocers L.N. Bate & Sons and the wholesale hardware merchant Thomas Birkett & Son, were forced to relocate. By the end of April 1927, workmen using steam shovels and teams of horses were hard at work filling in the western Canal Basin. Huge piles of earth were piled up near the Laurier Street Bridge ready to be shifted into the basin. On 14 November 1927, the last renovations to the Rideau Canal commenced with the construction of the new retaining wall from Connaught Plaza to the Laurier Street Bridge. With that, the old Canal Basin, which had served Ottawa for almost 100 years, vanished into history.

Published in Changes in the City's Landscape, Physical Appearance or Life
Tagged under
back to top