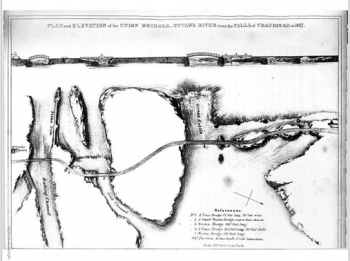 The initial 1832 dam built by George Buchanan can be seen in the middle left hand side of the map of the Chaudière Falls and Bridge from Joseph Bouchette, The British Dominions in North America, 1832.

We have in our very midst unrivalled water powers, and it would argue the utmost lack of energy, the blindest fatuity, were they to remain undeveloped. “Impressions of Ottawa,” Ottawa Citizen, 6 November 1860.

The mighty Ottawa River, also known as the Kichissippi in Algonquin and the Outaouais in French, stretches more than 1,100 kilometres. Its source is Lac Capitmichigama in central Quebec from which it runs west to Lake Timiskaming before heading south to form the boundary between Ontario and Quebec, passing through the National Capital Region on its way to meet the St. Lawrence at the Lac des Deux Montagnes in Montreal. Its watershed covers an area of more than 146,000 square kilometres.

For countless generations, the Ottawa was a key transportation and trading route for the indigenous peoples of this land. Later, it became the route for European explorers and settlers into Canada’s interior. Led by native guides, Samuel de Champlain explored the Ottawa River in 1613. It subsequently became an important thoroughfare for French voyageurs and coureurs des bois trading manufactured goods with the First Nations for beaver and other pelts which were in high demand in Europe. Later still, loggers and lumbermen of the nineteenth and twentieth centuries, who were exploiting the ancient forests of the Ottawa Valley, relied on the river to transport logs and square timber (logs that had been stripped of their bark and roughly squared) to markets.

With a vertical descent of 365 metres, the Ottawa River is turbulent and fast-flowing even today despite more than 50 dams and hydro facilities constructed along its main branch and tributaries.  According to the Ottawa Riverkeeper, the Ottawa is one of the most regulated rivers in Canada. Nonetheless, it remains a magnet for white-water canoers and rafters.

For nineteenth century lumbermen trying to bring rafts of logs down the Ottawa, its rapids and falls were a nightmare, posing dangers to life and limb. However, the entrepreneurs of Ottawa and Hull saw the potential for profit from those same rapids and falls if they could be harnessed to produce the motive power necessary to drive the big saws that processed the raw lumber. By damming the Ottawa, mill owners could channel the flow of water through their mills. A tamed river also meant a safer river for the log drivers.

One of the major obstacles on the Ottawa River was the Chaudière Falls, known as the Giant Kettle in English. In 1829, Ruggles Wright, the son of Philemon Wright who founded Hull, built a timber slide on the Quebec side of the river to permit logs and rafts of timber to bypass the falls. Three years later, another slide was constructed by George Buchanan on the Ontario side of the river. To build the slide, a dam was constructed that ran roughly parallel to the shore to divert water into a channel. (The dam can be seen in an 1832 plan of the first Union Bridge across the Ottawa River by Joseph Bouchette.)

In 1854, at the behest of the mill-owners and lumbermen of Bytown, the Department of Public Works of the Provincial Government, constructed a 640-foot dam with log booms on the south side of the Chaudière Falls. It extended from the pier built by George Buchanan at the head of his timber slide to Russell Island above the Falls. The purpose of the dam was threefold. First, it would provide a more constant supply of water during the low water summer months. Second, it would furnish a 140-acre pool of calm water for the storage of logs waiting to be processed in the adjacent mills. Previously, only a day’s worth of logs could be stored. Third, it would reduce the loss of timber inadvertently going over the Falls. It was reported that £3,000 pounds worth of logs was lost annually owing to the timber cribs getting into the wrong channel. There was no mention of the fate of the men driving the logs.

A second dam with booms was also constructed on the north side of the river to ensure a constant supply of water for the Hull mills. According to the Citizen, “There is no limit to the extent of the commerce that may be created by the mills and factories that can be put into motion by the water of the Chaudière.”

Despite the hyperbole, the newspaper was on to something. Between 1856 and 1860, the timber industry expanded rapidly with Messrs. Perley, Booth, and Eddy joining timber pioneers such as Messrs. Baldwin, Bronson, Harris, and Young. The mill-owners sought more River “improvements” to expand their capacity. Reportedly, the lumber barons, to whom the government had leased water rights, were “exceedingly irritated and annoyed” to go with out water for their mills during the low water summer months while at the same time “a mighty volume of water [was] plunging over the Falls.” With many mills forced to close for part of the year, there was a loss of profit, especially as mill owners tried to keep skilled workers on payrolls as long as possible fearing that they might leave the region if they were laid off. Even so, many found themselves temporarily unemployed during the low water months—a serious condition as there was no unemployment insurance. The Citizen opined that “fathers of families, others younger—the hope and strength of the country—[were] standing idle, in want of work…while the mighty volume of the Ottawa rushed by the silent mills uncurbed and useless to man.”

Mr. Baldwin proposed that the government build a submerged dam across the main channel a few hundred yards above (west of) the Chaudière Falls, to divert the river towards the lumber mills. However, excess water would continue to flow over the dam during periods of high water and avert spring flooding. The government was not convinced. To allay governmental concerns about potential flooding, Baldwin suggested lowering Russell Island, located at the south end of the proposed dam, by six feet to provide an additional area of discharge during periods of high water. During low water, it would stand above the waterline and would act as an auxiliary dam. He figured that the water running over the lowered island during the spring freshet would offset the obstruction caused by the proposed dam. Still unconvinced, the Department of Public Works refused to fund the project and demanded the backers of the project, should they go ahead themselves, provide bonds of indemnity to compensate landowners who might be flooded by the dam.

With the capital for the venture provided by “a large party of the leading residents of the city and others,” the project went ahead under the supervision of Mr. John O’Connor during the fall of 1868. The submerged dam was 350 feet long and 75 feet wide at the base, tapering to 24 to 48 feet wide at the top. It was built of strong crib-work filled in with stone and braced with longitudinal timbers faced with 5-inch thick planks upon which guard timbers were attached using iron bolts. Guard piers protected each end of the dam. Reportedly, workers excavated 8,000 tons of rock, presumably from Russell Island.  The project costed roughly $10,000, and was completed in five weeks using a workforce of 200 men.

The Grand Chaudière Dam was inaugurated on 16 October 1868, a day which the Citizen said would be “long remembered in the annals of the lumber interest of the valley.” The paper also praised the “enterprise of our American citizens—by whom the majority of the milling establishments at the Chaudière are owned.”

A few days later, sixty of the leading citizens of Ottawa assembled on Russell Island for a celebration to mark the completion of the dam, “and pledge a bumper to the health of the builder, and prosperity to the trade.” Chairing the gathering was Richard Scott, the Liberal member of the legislative assembly who represented Ottawa in the Ontario legislature. Other attendees included, Joseph M. Currier, the Conservative member of parliament for the City of Ottawa, Mayor Henry Friel, and a number of Dominion Government cabinet ministers despite the government’s earlier opposition to the project. Samuel Tilley, the Minister of Inland Revenue, apologized for the absence of Sir George Cartier and others who could not attend owing to important engagements elsewhere. James Skead, a prominent area businessman and senator, argued that similar works like the Chaudière dam were needed elsewhere on the Ottawa River. 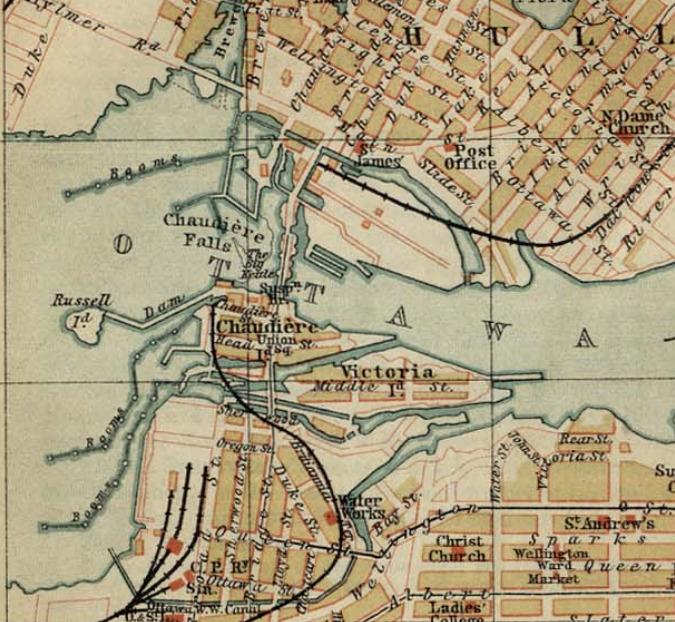 Map of the Chaudière area before the construction of the Chaudière Ring dam in 1908. The 1854 dam between Chaudière Island and Russell Island can be seen in the middle left of the map. The Grand Chaudière Dam is not visible.The impact on timber production owing to the construction of the Grand Chaudière Dam was considerable. Reportedly, the small mill owned by Mr. Young increased its monthly production by 1 million feet of lumber, the product of 5,000 standard logs, during the first dry season after the completion of the dam. Extrapolating these figures to include the much larger operations of Messrs. Baldwin, Bronson, Booth and Perley, the Citizen calculated that a total of 13 million additional feet of lumber were produced every month during the dry season. With a dry season averaging three months, the value of increased production amounted to an estimated $507,000 dollars—a huge sum. As well, there was no flooding during the spring freshet as feared by the government. The expectations of the dam’s backers were more than fully met.

With the mills working at full capacity from the beginning to the end of the milling season, the Citizen wrote: The completion and successful working of the dam may be said to be the crowning point of numerous victories over great natural obstructions and difficulties. The vast water power which has for ages been conserved in the Chaudière Falls, has now been utilized to an extent which few of the last generation ever dreamt of, and which but few of the present generation, who thoroughly understood the difficulties, could, a few years ago, have supposed could be realized.

Today, the Grand Chaudière Dam, which permitted a huge expansion of the Ottawa timber business during the second half of the nineteenth century, is long gone. It was replaced by the Chaudière Ring Dam in 1908 which massively expanded the hydro-electric generating capacity of the Chaudière Falls, and provided the bulk of Ottawa’s electricity during the early twentieth century.