The Origins of Street Names 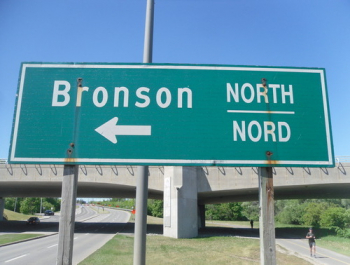 Considering how many people in Ottawa are new to the city, it seemed reasonable to do a little research and find out who, or what, some of the oldest Ottawa streets are named after. Many persons who contributed to the foundation and growth of our City are not well known, and I understand both City staff and the Historical Society of Ottawa have developed tentative plans to make early Bytowners or Ottawans better known. This is a project deserving support! No article of this size can hope to do much more than scratch the surface of this topic. So only a few streets are covered.

Much has been said and written about the proper use of Lebreton Flats which contained Lebreton Street. These were named after Charles LEBRETON (1779-1848) who was a native of Jersey and one of Nepean Township's earliest settlers. He came to our area from Newfoundland and served with distinction in the War of 1812. With a partner, he purchased Lebreton Flats in 1820 and, in 1826 got into a legal wrangle with Colonel By and the Governor General, Lord Dalhousie over the price he wanted for his land. He spent a good deal of money defending the legality of his land ownership against the government of the day He retained his land, but the Rideau Canal was built elsewhere probably because Dalhousie and By rather disliked him after the court battle. Was sour grapes involved in the location of the canal?

Nicholas SPARKS (1792-1862) for whom Sparks Street is named is much better known,. but the extent of his good works in Ottawa is less known Sparks came to Canada in 1816, from Ireland, to avoid religious strife. He married the widow of Philemon Wright Jr. in 1826. He owned a sawmill and vast timber rights in the area. In 1821, for the equivalent of $500 he purchased land that extended from what is now Wellington St. to Laurier Avenue West and from Waller Street to Bronson Avenue. He sold part of his land to construct the Rideau Canal, but, because of the price he asked, another 96 acres were expropriated much to his chagrin!

Perhaps wishing to avoid religious strife in Canada, he donated land for churches to both the Anglicans and the Presbyterians. Sparks went on to serve for many years in local government. Sparks named a street on his land after a friend, Daniel O' CONNOR, who became Treasurer of the Dalhousie District (later Ottawa-Carleton) and another after his son-in-law, James SLATER Slater Street was first named Waugh Street, after a local merchant Caldwell Waugh., James Slater came to Canada about 1830, married Sparks' daughter in 1847 and went on to be, successively, Provincial Land surveyor, Superintendent of the Rideau Canal and Chairman of the Ottawa School Board.

In Lower Town, Bruyere Street is named after Mother Elizabeth BRUYERE (1818-1876) the founder of the Grey nuns and the Ottawa Hospital (1845) She also established an orphanage, a hospice and an asylum for destitute women. GUIGUES Street is named after Monsignor Joseph-Eugene—Bruno Guigues (1805-1874), Ottawa's first Roman Catholic Bishop. He founded what became the University of Ottawa on land donated by Louis BESSERER.

Further west, BRONSON Avenue was named after Erskine Henry Bronson, a prominent businessman, whose father Henry Bronson had founded a local lumbering firm. Speaking of lumbering, who else could BOOTH Street be named after other than J. R. Booth “the Ottawa Valley Lumber King”.

These are only a few of the origins of Ottawa street names. The City of Ottawa Archives is working on identifying many more.