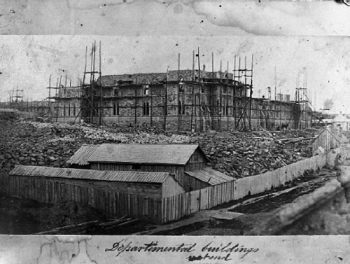 In early May 1859, roughly a year after the Canadian Parliament had ratified Queen Victoria’s selection of Ottawa as the permanent capital of the United Province of Canada, steps were taken to turn the regal decision into reality. John Rose, the provincial Commissioner of Public Works, announced an architectural competition for four government buildings to be constructed in Ottawa, still a rough-and-tumble lumber town that lacked the facilities and amenities of a capital city. Three were slated to be built on Barrack Hill, a spectacular 25-acre plot of land overlooking the Ottawa River. These comprised a new Provincial Legislature, and two Departmental buildings to house civil servants. A fourth, called Government House, was planned for nearby Major’s Hill, and was to be the official residence of the Governor General. Submissions were anonymous, with entries identified solely by a motto; the name(s) of the entrants were submitted in sealed envelopes that were opened only after the winning designs had been selected. The first and second-placed entries received prize money: £250 and £100 for the Parliament building, £250 and £100 for the two departmental buildings, and £100 and £50 for Government House.

The scale of the project was monumental, far larger than anything previously commissioned in British North America. Arguably, the buildings and their expected grandeur were out of keeping with both the size of Ottawa, and the population of the Province of Canada, which totalled only 2.5 million in 1860. But as was the case with the cathedrals of the Middle Ages, people were planning for the future.

The government specified that the Legislature building was to contain a Council Chamber and a Hall of Assembly for the upper and lower houses of Parliament, a lobby, a semi-detached library, a picture gallery, and 85 reading rooms, wardrobes, Speakers’ apartments, committee rooms, and clerk rooms, totalling 55,000 square feet. The two Departmental buildings, which together amounted to roughly the same square footage as the Legislature building, required 170 offices to house the entire Canadian public service, including space for the Governor General, the Executive Council, the Indian Department, Provincial Secretary, Crown Law Offices, the Adjutant General for the Militia, Agriculture, Public Works, Crown Lands, Finance, Customs, Audit, the Receiver General, and the Postmaster General. Specifications for the Governor General’s residence called for a 27,000 square foot mansion with 75 rooms, of which 40 would consist of staterooms, a ball room, dining room, private apartments, and a library, with the remainder taken up with domestic offices. In keeping with Victorian sensibilities, there was no direct reference to washrooms in any of the buildings. Presumably, they came under “&c., &c.” in the specifications. The most detailed requirements were stipulated for the Parliamentary Library for which the Parliamentary Librarian, Alpheus Todd, had insisted on state-of-the-art facilities, and rigorous fire precautions. These latter measures spared the Library the centre block’s fate when the main building was gutted by fire in 1916.

The government call for submissions did not specify any particular architectural style for the buildings beyond saying that it should be “plain” and “substantial,” with “hammer-dressed masonry, with neatly-pointed joints, and cut stone quoits, window dressings, cornices and entablatures,” and that the materials for construction should be found locally. The budget for the buildings was set at $300,000 for Parliament House, $240,000 for the two Departmental buildings which were to flank the Legislature building, and $100,000 for Government House.

Despite the size and complexity of the government’s requirements, architects were given little time to design and draw detailed architectural drawings; completed plans had to be submitted by the following 1 August. The competition had two judges, Samuel Keefer, Deputy Commissioner of Public Works, and Frederick Rubridge. Both were engineers. Rubridge was also a trained surveyor and architect.

Thirty-two designs and 298 drawings for the four buildings were submitted in a variety of styles, including Civil Gothic, Classical, Norman, Tudor, and Italian. They were judged on the basis of ten criteria: fitness of the plan and interior arrangement, economy of construction, beauty of design, adaptation to site, climate, and materials available locally, economy of heating and ventilation, conformity with required conditions, and safety against fire. Of the sixteen proposals submitted for the Parliament building and library, a Civic Gothic design by “Semper Paratus,” the nom de plume of Thomas Fuller and Chilion Jones of Toronto, emerged victorious. Of the seven designs submitted for the departmental buildings that were to flank the Legislature building, the Civic Gothic proposal of “Stat nomen in umbra,” (Ottawa architects Thomas Stent and Augustus Lever), took first place. Frederic Cumberland and W. George Storm’s Venetian-style design, submitted under the name “Odahwah,” won the contest for Government House.

It was perhaps no surprise that the two judges, Keefer and Rubridge, selected the Gothic style for the three most important buildings. This was the architectural style chosen for the British Houses of Parliament built during the 1830s. In contrast, the classical style, chosen for the U.S. Capitol building in Washington D.C., was associated with U.S. republicanism. The Gothic style, symbolic of ties with Britain, was enthusiastically embraced by Canadians who used it extensively over the next fifty years.

Site preparation on Barrack Hill for the Legislature building and the Departmental buildings began promptly, with the official ground-breaking ceremony taking place on Tuesday, 20 December 1859. It was a low-key affair, and little advertised. Nonetheless, thousands of Ottawa citizens walked to the construction site at noon to be part of the historic event. Mr Rose, the Commissioner of Public Works, the government department responsible for the buildings’ construction, turned the first sod for the Legislature building. In a short speech, he reflected on how laws would be enacted on this spot for the benefit of future generations. He also referred to the acrimonious debate surrounding the selection of Ottawa as the capital of Canada. While ostensibly expressing no opinion on the subject, he contended that the very continuance of the Canadian Union depended on Parliament being in Ottawa. Foreshadowing future constitutional debates, he expressed a “sincere hope that the cries of disunion, which is as yet but faintly heard, may never find an echo in the breasts of any considerable number of Canadian people.” He added that in light of the “moral and material progress made since the Union of Upper and Lower Canada, he could not reconcile himself to the idea that a desire for separation is prompted by…any sentiment of true patriotism.” At the conclusion of his speech, a cannon salute was fired.

Mr Keefer, the Deputy Commissioner and one of the two judges in the architectural competition for the Parliament buildings, was supposed to turn the first sod for the flanking departmental buildings. However, given the cold, and with people already drifting away after Rose’s speech, that part of the ceremony was dropped. Instead the official party, which include Ottawa’s mayor, Edward McGillivray, members of city council, the architects, and contractors, retired to Doran’s Hotel for refreshments. 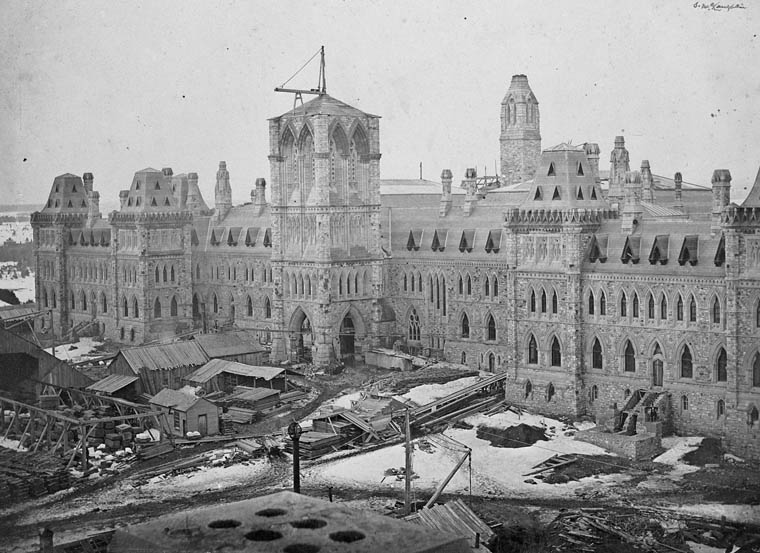 Centre Block under construction, 1865, by Samuel McLaughlinWithin weeks, Barrack Hill, later known as Parliament Hill, was a beehive of activity, employing thousands of labourers, representing a huge portion of Ottawa’s workforce—the city’s entire population numbered less than 15,000. Construction almost immediately ran into trouble leading to cost overruns and delays, though the foundations were sufficiently advanced for the Prince of Wales to lay the cornerstone of the Legislative building at the beginning of September 1860. But by October 1861, despite more than $1.4 million having been spent, the project was far from complete. Work was halted, and some 3,000 men lost their jobs, at least temporarily. To save money, the government also dropped the idea of building Government House.

In June 1862, the government appointed a commission to look into charges of financial mismanagement. Reporting back in January 1863, the commission concluded that the excessive costs were due to a number of factors including: a failure of Public Works to assess the depth of the bedrock on the site prior to signing contracts, the improper awarding of the construction contract to Thomas McGreevy, the principal building contractor, who received the job on the basis of patronage rather than price, and a failure to adequately factor in the cost of heating and ventilating the buildings. The architects were also taken to task for inadequately monitoring the progress of the construction. Samuel Keefer, the Deputy Commissioner, took the blame for the fiasco, and was fired.

Construction resumed in 1863 under the general supervision of Frederick Rubridge, the other judge in the architectural contest. By the fall of 1865, the East and West Blocks were sufficiently ready for civil servants to move from Quebec City into their new quarters. The Legislature building (Centre Block) was officially opened on 6 June 1866, roughly a year before Confederation. Construction on the Victoria Tower in the Centre block continued until 1873, while work on the Library lasted until 1877. The final cost of the three buildings was $2.9 million, four times the original budget.

City of Ottawa, 2001-15. A Virtual Exhibit: Ottawa Becomes the Capital.

The Ottawa Citizen, 1859. “Breaking Ground for the Commencement of the Parliament Buildings in Ottawa,” 23 December.