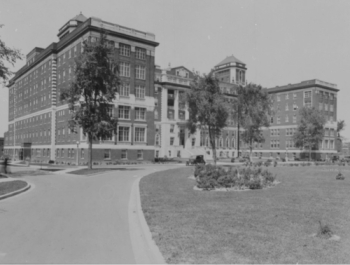 Department of the Interior, Library and Archives Canada, 3319465.

By 1918, it had become apparent that the three principal hospitals serving Ottawa—the Water Street Hospital, established by Élisabeth Bruyère in 1845 as the Hotel-Dieu Hospital, the Carleton County Protestant General Hospital located on Rideau Street that opened in 1851, and St. Luke’s Hospital on Frank Street established in 1890—had become overstretched. The city’s population had grown considerably and continued rapid growth was expected. As well, its health facilities were increasingly being used by suburban communities. In May 1918, the Boards of the Protestant and St. Luke’s hospitals agreed at a joint meeting that they should send a “memorial” to Ottawa City Council noting the inadequacy of the city’ current hospital facilities and recommending the construction a new, large and modern 500-bed hospital.

The inadequacy of Ottawa’s health care system was dramatically revealed just a few months later with the arrival of the Spanish influenza epidemic in September 1918. Area hospitals were overwhelmed. Health officials were forced to open emergency hospitals, often in schools, in an attempt to deal with the overflow of cases. Before the epidemic petered out, there were roughly 10,000 flu cases and close to 600 deaths in Ottawa out of a population of less than 110,000.

The influenza pandemic had hardly ebbed when on 13 February 1919 more than 100 leading Ottawa citizens, supported by prominent community organizations, presented the two hospitals’ petition. Among a new hospital’s advocates were Mr. J.R. Booth, the lumberman, Sir George Burn, the head of the Bank of Ottawa, Mr. A.J. Freiman, the owner of Freiman’s department store on Rideau St, Warren Soper, one of Ottawa’s electrical barons, and Senator Belcourt, a noted francophone Liberal senator. Organizational support came from the Ottawa Board of Trade, the Rotary Club, the Retail Merchants’ Association, the Trade and Labour Council, the Ottawa Chapter of the Council of Women, the May Court Club, and the Women’s Canadian Club. The proposal called for the construction of a new 500-bed hospital at a cost of $1.5 million. The directors of the Protestant General and St. Luke’s indicated their willingness to merge and turn over all of their assets and properties to the city if the new municipal hospital was built.

Given such high-powered supporters, City Council, led by Mayor Harold Fisher who was a strong advocate for a new hospital, moved swiftly.  Less than two weeks later, Council asked the province for authority to raise $1.5 million in debentures to pay for the new hospital. Over time, the authorized amount increased to $2.75 million as the initial estimates proved to be too low. Another $750,000 was needed for equipment. Prominent residents also provided additional funding. R.M. Cox, a lumberman, left almost $500,000 in his will to the new hospital. Hiram Robinson bequested $100,000 to fund a 70-bed children’s wing, while ex-alderman W.G. Black left $100,000 for the maintenance of the hospital grounds.

As one would expect, the site for the new hospital was contentious. Three successive reports through 1919 looked at potential locations which included Regan’s Hill in Sandy Hill, the Slattery-Bower property in Ottawa East, and Dow’s Lake at the corner of Bronson Street and Carling Avenue. In the end, the final report narrowed the choices down to two—the Protestant Hospital site on Rideau Street and Reid Farm out on the fringes of the city across from the Experimental Farm. The Boards of both the Protestant General and St. Luke’s Hospital unanimously supported the Reid Farm location. While somewhat distant from downtown, though only twelve minutes by car from the Post Office on Sparks Street (now the site of the War Memorial), it offered fresh, country air—a major consideration in these years before air conditioning. As well, the population of the western part of the city was growing rapidly, something that was expected to continue over the coming decades.

After considerable debate, City Council voted 16-4 in early November 1919 to purchase a 23.5-acre portion of Reid Farm for the new Civic Hospital. The price tag was $77,850. The minority on Council who voted against the site were primarily concerned about the distance of the hospital from the bulk of the city’s population, as both the Protestant General and St. Luke’s would close when the new Civic Hospital opened its doors. Alderman Pinard, the leader of the minority, said that while he accepted the point that Reid Farm might be the right site in fifty to one hundred years, one had to also consider the present.

Interestingly, there is no contemporaneous reference in either the Ottawa Citizen or the Ottawa Journal newspaper to “Fisher’s Folly,” the moniker later widely given to the Civic Hospital. While Mayor Fisher was indeed in favour of locating the hospital in Reid Farm, so was most of City Council as well as the hospitals. While there was some community opposition, there was no widespread skepticism as the name suggests. The first reference in the press to “Fisher’s Folly” didn’t seemingly occur until 1959. Subsequent retellings of the Civic Hospital story picked up on this catchy though likely misleading name.

Reid Farm, located in Hintonburg, was bounded by the train tracks to the north (now the Queensway), Fairmont Avenue in the east, Parkdale Avenue in the west and Carling in the south. Reportedly some 200 acres of land was purchased from the Crown in 1829 by one John Anderson who offered to sell 100 acres to John Reid. They tossed a coin to decide who would take the southern or the northern portion. Anderson won the toss and opted for the northern half leaving Reid with the southern portion. Reid and his wife came to settle on the land in 1832, having bought farm implements and oxen. The couple initially lived in a log house before constructing a stone building. At that time, the farm was located in a virtual wilderness, with only a rough trail leading through the woods to Richmond Road. Robert Reid lived on the farm until his death in 1889 when it passed to his son, Robert Jr. and his daughter Agnes, who in turn sold the land to the city and developers. Robert Junior died in 1923 and his sister Agnes, the last of the Reid family, in 1925.

Excavation work on the new Civic Hospital began in July 1920. The architects for the project were Stevens & Lee of Toronto, a firm that had built a number of hospitals across Canada, including Halifax’s Children’s Hospital, the General Hospital in Kingston, and the Royal Victoria Hospital in Montreal. General contractors were Ross-Meagher Co. and Alex I. Garvock.

While the hospital was initially expected to open its doors by the end of 1921, there were a number of delays, caused in part by labour issues and supply problems, which pushed the deadline out until the end of 1924. The enterprise was also massive, employing more than 300 workers. Two million bricks were used along with 250,000 terra cotta blocks. It was calculated that there were seven miles of walls.

The new Civic Hospital opened on 27 November 1924 with the Hon. Lincoln Goldie, the Provincial Secretary and Registrar of Ontario, officiating. Also present for the big day was Ottawa Mayor Champagne and former mayor Harold Fisher who was now the Liberal MLA for Ottawa West. He was also a member of the Board of Trustees for the new hospital. Fisher said that it was the greatest day of his life. More than 1,000 guests attended the opening ceremonies. Over the following three days, the general public came to view the new, state-of-the-art hospital facilities.

The Civic Hospital campus comprised of five buildings. The main building was designed in the shape of an “H” with open courts facing both north and south. On the ground floor was the admitting department, the entrance for ambulances, the X-ray department, the isolation unit, as well as the psychiatric and hydro-therapy departments. There was a special admitting department for maternity cases as well as a dedicated elevator to take expectant mothers to the 80-bed maternity ward. There was also a children’s department with playrooms.

The 550-bed hospital had public, semi-private and private wards, with the largest ward having 16 beds. Each bed was equipped with a washstand with hot and cold running water and a mirror. Screens provided privacy. Private patients had private lavatories, with a bath shared between every two rooms. Private patients could also have a telephone for an additional fee. There were two sunshine rooms and three large airing balconies for patients. The top (sixth) floor was the location of the operating and surgical departments with four major operating rooms, an eye-operating room, a plaster room and rooms for other ancillary activities, including sterilization, workrooms and service. Natural lighting was provided for the operating rooms by means of high, vertical, sash windows. The floors in the building were covered in jasmine-coloured “Battleship” linoleum. Western and southern facing walls were painted in tints of French grey while northern and eastern walls were painted a buff colour.

Four other buildings were linked by underground tunnels to the main building. To the north was a service building which housed the principal kitchen, hospital stores, and staff dining rooms. Its upper floors were used as accommodation for resident staff. North of the service building was the power house that provided electricity and refrigeration. There were also boilers for central heating and laundries. A nurses’ home faced Parkdale Avenue, providing single rooms for all nurses along with parlours, entertainment and living rooms. Finally, there were a building for servants, quarters for carpenters and painters, as well as an incinerator.

Shortly after the Civic Hospital opened for business, the old Protestant General and St. Luke’s hospitals were closed as was the old Ottawa Maternity Hospital located at the end of Rideau St. near the Cummings Bridge and the adjacent Lady Stanley Institute nursing school. Beginning at 9:30am on 17 December 1924, forty-four patients from the Protestant General were ferried over to the Civic. Those bedridden arrived by ambulance, while ambulatory public ward patients were transported by bus. Private and semi-private patients came by taxi. The first patient to be admitted to the Civic was Donald MacIvor from Niagara Falls, a veteran patient of the Department of Soldiers’ Civil Re-establishment. Patients from St. Luke’s were transferred several days later.

Fast forward a hundred years, work is underway to replace the now aging Civic campus of The Ottawa Hospital with a new hospital that will meet the needs of Ottawa residents into the 22nd century. As was the case in 1919, there has been considerable controversy about the location of the new hospital. A proposal to site it on the other side of Carling Avenue across from the existing hospital met with widespread opposition since it meant carving out land from the Central Experimental Farm—a National Historic Site and a treasured part of the greenbelt. A new site close to Dow’s Lake, which had been the previous location of Agriculture Canada’s Sir John Carling building imploded in 2014, was subsequently chosen with The Ottawa Hospital signing a 99-year lease with the federal government. The principal access to the new hospital complex will be via Carling Avenue.