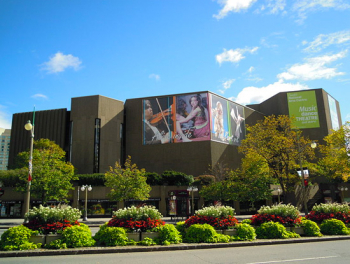 The National Arts Centre (NAC) was born out of a dream of establishing a performance hall in the nation’s capital. For decades, Ottawa made do with the Capitol Theatre, located at the intersection of Queen and Bank Streets. Although the Capitol was an architecturally impressive building and could seat more than 2,000 people in its cavernous auditorium, it had been designed for cinema and vaudeville shows. Constructed in 1920 for the Loew’s theatre chain of movie palaces, the Capitol lacked the facilities of a modern theatre.

In 1962, G. Hamilton Southam, a member of a wealthy Ottawa family that owned the eponymous Southam publishing empire, which included the Ottawa Citizen in its stable of newspapers, was approached by prominent Ottawa residents to spearhead efforts to turn the dream of a proper theatre in Ottawa into reality. The well-connected Southam, a diplomat in the Department of External Affairs, was ideal for the job. Within a year, the National Capital Arts Alliance, with Southam at its head, had put together a feasibility study, and was ready to approach the government for funding. The price tag for the building was $9 million (equivalent to $70 million in today’s money.) Their timing was perfect. The 1960s were years of plenty in Canada. The federal government, with money in its pockets, was seeking worthy projects to celebrate 1967, Canada’s centennial year. A performing arts centre for Ottawa fitted the bill perfectly. Southam presented the proposal to Prime Minister Lester Pearson in November 1963, and by Christmas the project had received the government’s formal approval.

Southam was appointed the co-ordinator of the project; he later becoming the NAC’s first director general. He immediately set up advisory committees composed of the country’s leading arts professionals to establish the requirements for an arts centre which would not only have a national mandate to promote and development Canadian performing arts and artists, but would also be bilingual, the first in the world. A number of sites were considered for the new performing arts centre. Nepean Point overlooking the Ottawa River, was an early favourite. But Charlotte Whitton, Ottawa’s mayor at the time, dissuaded the group, offering instead a parcel of city-owned land on Elgin Street.

The architectural contract for the Centre was given to ARCOP Associates of Montreal. Polish-born Fred David Lebensold, a founding member of the firm, was assigned the task of designing the complex structure. Lebensold was a good choice. He had been a professor of architecture at McGill University, and was a member of the Royal Architectural Institute of Canada. He had designed the Queen Elizabeth Theatre in Vancouver, the Confederation Centre of the Arts in Charlottetown, and the Place Des Arts in Montreal. Lebensold’s hexagonal design for the National Arts Centre in Ottawa, which was based on the shape of the building site, was in the Brutalist style. Poured, reinforced concrete covered with precast panels of Laurentian-granite aggregate in a variety of textures were used for both exterior and interior walls. “Brutalism” which comes from the French words, béton bru, meaning raw concrete, was a popular architectural style during the 1950s and 1960s for governmental and institutional buildings. The design attracted considerable controversy not least of which for the decision to turn the back of the building towards Elgin Street, with its front door facing the Rideau Canal. Charlotte Whitton called the Centre “Fort Culture.” The building was to house a salon, three performance halls of different sizes—the opera, theatre, and studio—in addition to workshops, rehearsal rooms, dressing rooms, restaurants, and an underground garage.

The approved plan was much larger than the Arts Alliance’s original proposal that Southam presented to Pearson, with the floor area increasing from 175,000 square feet to 474,000 square feet. Substantial funds, $500,000, were also allocated for sculptures, tapestries, and other art works to decorate the building. The budget was accordingly increased from $9 million to $16 million.

Construction began in late 1964. Excavation for the underground parking lot proved challenging owing to the risk of flooding due to the building’s proximity to the Rideau Canal. Costs quickly blew through the Centre’s $16 million budget, and were in excess of $26 million by the middle of 1965. When the building was finally finished in 1969, two years after Canada’s centennial, costs had reached $46.4 million (in excess of $300 million in today’s dollars). Needless to say, there were screams of outrage in Parliament. At a 1968 hearing into the matter, a senior Public Works official admitted that the government had placed more emphasis on quality than economy. A shortage of construction workers owing to building Expo 67 also contributed to cost pressures. But the millions bought a world-class performance centre which put Ottawa on the cultural map of not only Canada but the world.

The decision was made to separate the official opening of the Centre from its first performance. On Saturday, 31 May, 1969, all of Ottawa was invited to an open house and the opening festivities. Nearly 40,000 people toured the facility, giving the new National Arts Centre generally favourable reviews. At the official ceremonies that afternoon, Prime Minister Trudeau presented Lawrence Freiman, the chairman of the Centre’s board of trustees, with the contract between the federal government and the Centre. Embarrassingly, however, the Centre’s state-of-the art sound system misbehaved. After a series of weird sounds and feedback screeches, the system failed, leaving the official speeches inaudible except to those closest to the dais. More successful were the day’s free jazz, folk, and band concerts, as well as the night’s fireworks, and the four searchlights that plied the dark sky.

Two days later, the curtain finally rose at the Centre for the first time. All of Ottawa’s movers, shakers, and arts glitterati attended a gala event in the Opera House. Sending gossip columnists atwitter, Prime Minister Trudeau, then single, was accompanied by Madeleine Gobeil, who had just been appointed to the Arts Centre’s board. Governor General Roland Michener and his wife sat in the royal box.

The evening’s first attraction was the silken, multi-coloured curtain woven by Micheline Beauchemin. Costing $75,000, the curtain was fabricated in Japan since no loom in Canada was large enough. The curtain rose on a specially commissioned, once-only performance of a ballet called “The Queen.” The music was by composer Louis Applebaum, choreography was by Grant Strate, and costumes were by Jean-Claude Rinfret. Eighteen dancers in white baroque outfits danced in front of a large Canadian coat of arms. After the dance, the backdrop was raised to reveal the provincial coats of arms surrounding a Canadian flag which turned gradually into a Union Jack and a blue and white fleur de lys while the orchestra played O Canada.

The pièce de résistance was the world premiere of Kraanerg, a contemporary ballet commissioned for the Centre’s opening, with music composed by Greek-born Iannis Xanakis, dance choreographed by Roland Petit, and sets by the op-artist Victor Vasarely. According to Sarah Jennings, author of the definitive history of the National Arts Centre, the “avant-garde ballet with the discordant electronic-sounding orchestral music” was “hailed by the critics.” Perhaps. For most of the audience, the ballet was impossible to understand, a view seemingly shared by Xanakis and Petit themselves who said that it could not be taken in either a literal or symbolic way. This didn’t leave a lot of room for comprehension. The dancing was highly acrobatic. The Chicago Tribune’s theatre critic wrote that the “company was put through a series of puerile calisthenics which started with Indian wrestling and stopped with push-ups.” Claude Gingras of La Presse, called the first act “tiresome,” and the second “the effect produced by taking hallucinogenic drugs.”

A few days later, the first play was performed in the theatre. It was Lysistrata, a comedy by the ancient Greek playwright Aristophanes about women trying to end the Peloponnesian war by withholding sex from their husbands. The play was adapted by Michel Tremblay, and performed by Montreal’s Theâtre du Nouveau Monde, directed by André Brassard. The first English-language play was George Ryga’s The Ecstasy of Rita Joe, about a young Aboriginal girl living in a big Canadian city, directed by David Gardener, and performed by the Vancouver Playhouse. The first production in the Studio was Party Day by Jack Winter, performed by The Toronto Workshop Productions. The play was an odd choice for the government-funded NAC. Set against the backdrop of the Nuremburg rallies in Nazi Germany, Party Day spoke of the dangers of government sponsorship of the arts.

After several successful years, the NAC ran afoul of changing social and economic conditions in Canada. With nationalism rising in Quebec, especially within the artistic community, it became difficult to attract French-language players to Ottawa, deemed an Anglo backwater. Growing regionalism in the rest of the country led to calls for government arts subsidies to be distributed equitably across the country rather than centred in Ottawa at the NAC. Canada’s economic woes also cast a long shadow. Caught between rising inflation and successive budget cuts owing to the federal government’s yawning fiscal deficits, the NAC was forced to drastically scale back its activities though the 1980s and 1990s. First to go was the Centre’s English and French, cross-country, touring theatre. The opera then found itself on management’s little list of things it could do without. Next on the cutting-room floor was the “Le Restaurant,” the NAC’s haute cuisine restaurant, and the NAC’s in-house repertory theatre companies. Even the acclaimed NAC orchestra was threatened with conversion into a community-based organization. As a final indignity, there was talk of privatizing the NAC, and turning the building over to the National Capital Commission for use as a rental hall.

A renaissance began in the late 1990s, under the leadership of Elaine Calder, and then Peter Herrndorf, aided by a strong artistic team, including world renowned Pinchas Zukerman as music director. As the federal fiscal situation improved, government funding stabilized. In 2000, the NAC Foundation was established to raise funds from the private sector, helping to reduce the Centre’s reliance on the government. There was also a renewed emphasis on in-house theatre with the establishment of the NAC English Theatre Acting Company in 2006.

In February 2014, the NAC unveiled its “Road to 2019,” which detailed upcoming artistic events and festivals in the lead-up to the Centre 50th anniversary. It also launched a new logo and motto, “Canada is our stage, Le Canada en Scène,” to underscore its national identity. In December 2014, the federal government announced that the NAC would be undergoing a $110 million refurbishment that would reorient the front of the Centre towards the Parliament Hill, the National War Memorial, and Elgin Street rather than the Rideau Canal. No longer would the NAC have its back to the city.