Meet Me at Murphy's 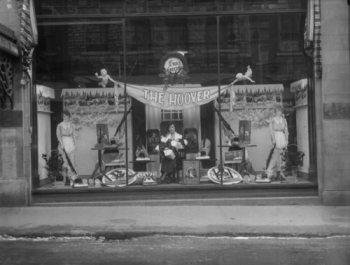 One of the greatest of the shopping emporiums that used to line Sparks Street, once the commercial heart of Ottawa, was Murphy-Gamble’s. It ranked amongst the finest Canadian department stores, and had a well-earned reputation for quality merchandise. The store attracted the custom of the city’s elite, including governors general and prime ministers. But its particular claim to fame was its restaurant, the Rideau Room, located on the fifth floor of the building at 118-124 Sparks Street. It was the only Ottawa’s department store that featured a dining room. Here, one could enjoy fine food accompanied by a live band, sometimes a trio, sometimes a seven-piece orchestra. It also served high tea each afternoon to weary customers who needed to catch their breath before renewing their assault on the store’s many departments. “Meet Me At Murphy’s” became an oft-heard refrain. 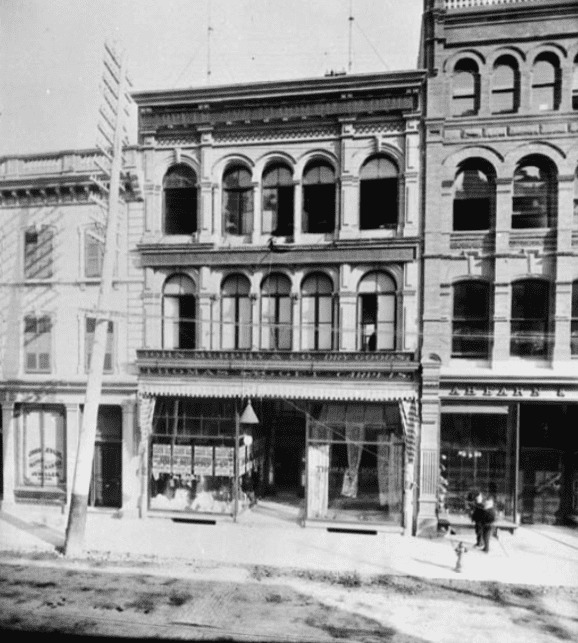 John Murphy Company, 66-68 Sparks Street, August 1892, Topley Studios, Library and Archives Canada, 138219.Murphy’s roots actually begin in Montreal where in 1867, John L. Murphy opened a dry-goods store on Catherine Street.  In 1890, Murphy expanded to Ottawa, buying Argyle House, a dry-goods store located at 66-68 Sparks Street from David Gardner who had himself acquire the entire stock of Argyle House for 61 cents on the dollar in a bankruptcy sale. He also leased the premises for a few months to clear the stock. Argyle House had been known for its high-end merchandise and for catering to Ottawa’s elite. The store had originally been opened in the early 1870s by James Russell.

The new John Murphy & Company store prospered under the management of Samuel Gamble, the company’s first vice-president who also happened to be John Murphy’s son-in-law. In 1904, John Murphy, now seventy years of age, sold his Montreal store to Robert Simpson Company of Toronto. The store continued to operate under the well-respected John Murphy & Company name. This left the Ottawa branch, now a stand-alone operation, to find a new name. In recognition of the success achieved under Samuel Gamble’s direction, the Murphy, Gamble Company was born. John Murphy continued to act as an advisor to the firm, his knowledge being invaluable. During his career as a merchant, he had made more than 100 ocean crossings to buy quality goods from European fashion houses. At this time, the three-storey building at 66 Sparks Street was expanded back towards Queen Street, thereby increasing the selling space by one-third. 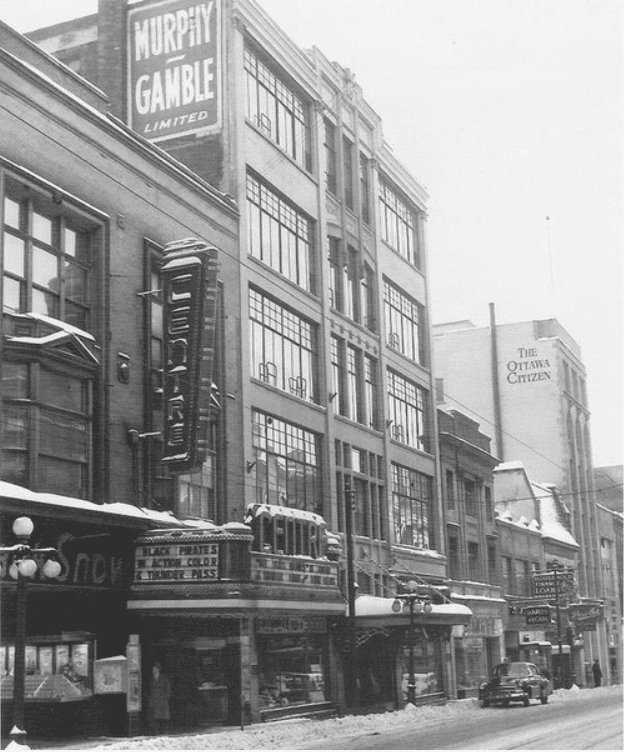 Murphy-Gamble Co at 118-124 Sparks Street, circa. 1955. The Centre Cinema next door is showing a double feature of Black Pirates and Thunder Pass which were both released in 1954. Notice the old Ottawa Citizen building on the right. Rankly.com.In 1910, the company expanded again. A five-storey store was constructed at 118-124 Sparks Street, the former site of the Brunswick Hotel. The new store opened in early January 1910. The last day of trading out of the old premises proved to be memorable. So many shoppers, mostly women, crowded into the store to snap up merchandise on sale that store staff were overwhelmed. Police had to be called in to control the enthusiastic shoppers. For an hour and a half, the doors were locked with “blue coats” on guard to repel would-be bargain hunters from storming inside. The next day, Murphy-Gamble’s new premises were also swamped by shoppers wanting to get a first glimpse at the new department store. That opening day, uniformed boys assisted ladies from their cars and carriages into and out of the emporium.

Reportedly, the new store cost $175,000 to build; no expense was spared in its construction and its fittings.  As far as possible, contracts and subcontracts were awarded to local Ottawa firms. Its architect was Ottawa’s Colborne Powell Meredith, it’s builder, Frederick W. Carling. The building, apparently one of the first of its kind in eastern Ontario, was constructed of reinforced concrete, a new method at that time. It also boasted what has been described as “Chicago-style glazed curtain wall façades” on both its Sparks and Queen Street sides. The pillars holding up the five storeys were also made of concrete, reinforced with steel rods, as were the stairways. There were hardwood floors throughout. The building was deemed fire proof, and was equipped with automatic fire doors and hoses on each floor. It was the first building in the city to carry electricity and lighting through underground conduits. The new edifice was called the Carling Block, presumably in honour of its builder.

On the basement level, which opened onto Queen Street, there was a high-class grocery store. There were windows displays along the entire façade. To one side was an entrance and a passageway for receiving goods. Lockers and toilets for male employees were located on this floor, The Sparks Street entrance, which was covered by a marquee, was to be found on the first, or ground floor. All interior fittings on this floor were made of mahogany. Window displays ran along Sparks Street. Two public telephones were located here for the use of customers. The women’s and men’s clothing departments were on this floor. The millinery and mantles department were found on the second floor. Fittings on this floor were made of oak. To the rear were offices; dressing rooms were located on the sides. A spacious stairway led from the main floor to an overhead gallery, or ladies’ waiting room, called “The Mezzanine.” On the third floor was the carpet, curtains and draperies department, along with customers’ washrooms. The fourth floor was devoted to manufacturing purposes, while the fifth floor was initially used for storage and bathroom facilities for female staff. Later, the fifth floor became the site of the “Tea Rooms” and later the much-loved “Rideau Room” dining room.

Samuel Gamble died in 1913 and the management of Murphy-Gamble’s passed first to Mr. J.T. Hammill and then to Mr. S.L.T. Morrell. In 1925, James L. Murray, and his two sons, Walter L. Murray and G. Scott Murray, purchased Murph-Gamble’s. The Murrays operated a similar business in Hamilton, Ontario called Murray Sons, Ltd. The two Murray sons moved to Ottawa to manage the Ottawa firm which continued to trade under the Murphy-Gamble marque. The firm thrived under the new management. Two more floors at the back of the store and an elevator were added in 1948. The firm also established buying offices in all the major cities of Europe, as well as in Mexico and the Far East.

On staff at Murphy-Gamble’s was a master tailor and dress designer, Ernest Gordon. A Gordon gown was a much sought-after attire for gala events. Reportedly, Princess Juliana of the Netherlands bought a Gordon gown.  Gordon died in 1948, having worked at Murphy’s for thirty-three years. 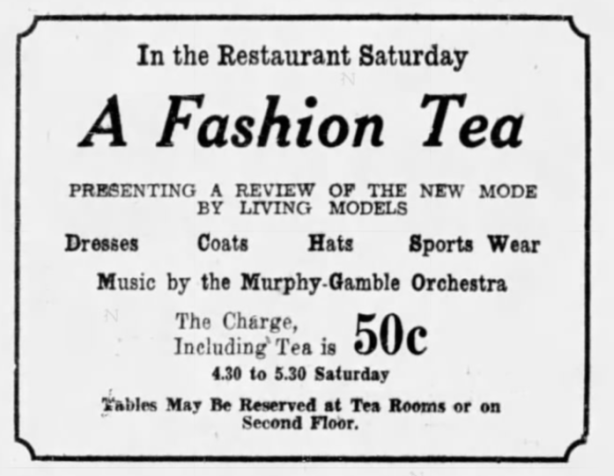 Advertisement for Tea and a Modelling Show, Ottawa Citizen, 26 September 1927.Christmas was a special time of the year at Murphy-Gamble’s. A fifty-foot Christmas tree was installed by the stairwell each year until later renovations made this impossible. A store choir sang carols every day during the week leading up to Christmas. Instead of Santa Claus coming to the store’s toy department, a series of parties was held for children in the Rideau Room where Santa gave a gift to every child. Easter was also special, bringing a visit from the Easter Bunny who handed out candy to the kiddies along with a copy of the Easter Bunny story.

Murphy’s was also known for going the extra mile for its customers. Reportedly, a bride-to-be asked Murphy’s to bake her wedding cake, just as the firm had done for her mother and grandmother before her. There was one hitch. The bride lived in the North West Territories. Undeterred, Murphy’s delivered the cake via a military plane and dog sled!

Murphy-Gamble Company stayed in the Murray family for close in fifty years. In 1972, now under the presidency of Russell Boyce, the son-in-law of Scott Murray, the venerable Ottawa landmark was sold to Robert Simpson Company, the same company that purchased the original family store in Montreal in 1904. All 300 of Murphy-Gamble’s staff were re-hired. The Murphy-Gamble sign came down to be replaced by Simpson’s.

Robert Simpson Company logo.Simpson’s operated out of the 118-124 Sparks Street location for eleven years. At the end of 1982, Simpson’s, now owned by the Hudson’s Bay Company, announced that the Sparks Street store would close owning to low profit margins. The Ottawa Citizen said that shoppers were like “mourners at an Irish wake.” On 29 January 1983, Simpson’s closed its doors for a last time with the loss of 85 permanent and 150 part-time jobs. The company published a final “Thank You” to its loyal Ottawa customers. The closure of the store after almost seventy-five years of business under various owners marked the end of a retail tradition. It left only the budget-conscious Zellers remaining as the last department store on Sparks Street until it too closed in 2013. 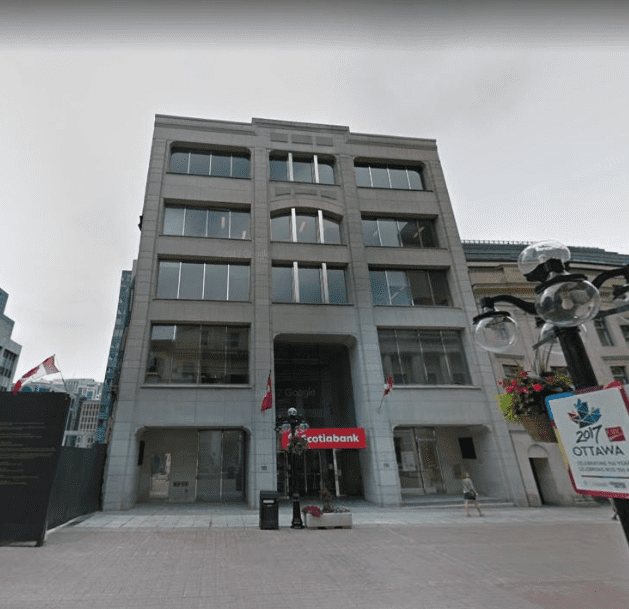