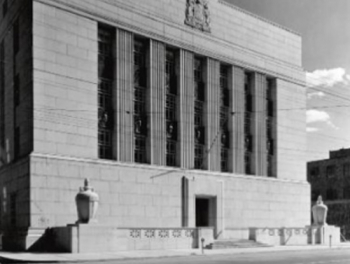 Bank of Canada, circa 1938. Note the stoppers in the urns on either side of the entrance patio.

At 10am on Monday, 11 March 1935, Canada entered a new monetary age. That day, the Bank of Canada, located at its temporary offices in the Victoria Building at 140 Wellington Street across the street from Parliament Hill, opened for business. It was supposed to have begun operations at the beginning of the month, but its opening was delayed owing to the late arrival of new Bank of Canada dollar bills from the British American Bank Note Company. The first governor of the new central bank was 37-year-old Graham Towers who previously had been a senior officer of the Royal Bank of Canada.

As stated in the preamble of the Bank of Canada Act, which received royal assent the previous July, the job of the new financial institution was “to regulate credit and currency in the best interest of the economic life of the nation, to control and protect the external value of the national monetary unit and to mitigate by its influence fluctuations in the general level of production, trade, prices and employment, so far as may be possible within the scope of monetary action, and generally to promote the economic and financial welfare of the Dominion.”

More specifically, the Bank became the issuer of Canadian bank notes. It also assumed responsibility for the government’s foreign exchange and debt management operations, and the conduct of monetary policy. It additionally began to act as adviser to the government on economic matters. Consistent with these new responsibilities, the same day the Bank opened for business, the Dominion Notes Act, under which Dominion notes had previously been issued, and the Finance Act, hitherto used by the Department of Finance to conduct monetary actions, were repealed. Offices of the Receiver General of Canada across the country were also converted to agencies of the new Bank of Canada.

Prior to the establishment of the Bank of Canada, Canada had little in the way of an active monetary policy. The government didn’t adjust interest rates up or down in response to economic activity and price pressures. Indeed, for most of the previous century, excluding during World War I and the immediate post-war years, most countries, including Canada, were on the gold standard. Consequently, monetary policy was essentially on autopilot with the domestic money supply moving in tandem with flows of gold in and out of the country and the mining of gold. However, this strict monetary system proved unable to cope with the Great Depression. Starting with Great Britain in 1931, country after country abandoned the gold standard and floated their currencies. Canada, which had reintroduced the gold standard in 1926, followed suit by banning the export of gold in late 1931. Two years later, it officially left the gold standard; Canadian paper money was no longer convertible into gold at a fixed rate.

In theory, the move to a freely floating currency gave scope to the government to use monetary policy to fight the Great Depression. However, it lacked the knowledge and the tools to adequately do so. While the Finance Act introduced in 1914 at the outset of World War I allowed the Dominion government to lend to the chartered banks, in essence to act as a lender of last resort, advances under the Act were made solely at the request of the banks. The government had no means of forcing banks to borrow reserves, which would have expanded the money supply, other than through “arm-twisting.” The government could increase the so-called “fiduciary” issue of Dominion notes, that is to say the small issue of notes that was not backed by gold, but this would take an act of Parliament, a process that would take a long time to implement.

Although the Canadian banking system, unlike that of the United States, weathered the Depression without failures, slumping domestic economic activity and a great distrust of private banks fuelled importantly by farm foreclosures led to strong political pressures on the government to do something—its answer, the creation of a central bank. Additional impetus came from the British government that favoured the establishment of central banks in its overseas dominions and colonies.

In July 1933, the Conservative government of R.B. Bennett formed the Macmillan Commission to study the issue. Chaired by Lord Macmillan, a pro-central banking British jurist, the Commission comprised another five members: Sir Charles Addis, a former Bank of England director, John Brownlee, the premier of Alberta, and two Canadian bankers, Sir William White and Beaudry Leman. Its conclusion was never in much doubt. After only seven weeks of testimony in hearings across the country, the Commission came out 3-2 in favour of establishing a central bank, with the two Canadian bankers, concerned about losing their bank-note issuing privileges, dissenting.

Debate then moved to the House of Commons. Although the creation of a central bank was supported by most MPs, excluding certain members of the ruling Conservative Party with links to the banking industry, the focus of debate was on whether the Bank of Canada would be privately or publicly owned. During the 1930s, most central banks, including the Bank of England, were privately owned. The government favoured a privately-owned, widely-held central bank with limits placed on profits. It contended that private ownership would distance the central bank from political interference, enabling the bank to “avoid pressure from particular interests.” Opposition parties rejected this view and called for a government-owned institution. In the event, the government got its way. When the Bank of Canada started operations in March 1935 it was a widely-held, private institution. Its directors were appointed by shareholders from diverse occupations. The only link to government was through the Deputy Minister of Finance who was appointed as an ex officio member of the Board. However, when Mackenzie King’s Liberals were voted back into office in 1936, the Dominion government took control of the Bank of Canada in two stages, fully nationalizing it in 1938.

Despite its creation to help address the effects of the Great Depression, the Bank of Canada did relatively little to counter the high level of unemployment and low prices in Canada during the pre-war years. The Bank Rate, (i.e. the interest rate that the Bank of Canada charged on loans to chartered banks) remained unchanged from the similar Advance Rate that the Government charged under the Finance Act. Initially, the Bank focused its energy in acquiring the staff necessary to operate a modern central bank. Its research abilities were also called upon by the government to provide advice on provincial finances and later on Dominion-provincial relations (the Rowell-Sirois Commission). Subsequently, with political events taking an ominous turn in Europe, the Bank began to prepare for war, laying the groundwork for the imposition of exchange controls that were introduced in September 1939.

Work also got underway in designing and building a new head office that met the specialized requirements of the new central bank, including secure vaults for storing securities and Canada’s gold reserves. In 1936, the Bank acquired property on Wellington Street across the street from the newly constructed Justice and Confederation Buildings. The design of the new Bank of Canada building, drawn by architect Sumner Davenport in co-operation with the Toronto architectural firm Marani, Lawson & Morris, was inspired by classical architecture then favoured by banks that provided a sense of stability and strength. Called “stripped classical” owing to its austere façade, the plain, grey cube of granite complemented the château-style government buildings across the street. Costing roughly $1 million ($17.5 million in today’s money), it was also comparatively cheap to build.

Between the plain pilasters that decorate the Wellington Street front of the building are panels of Vermont Verde antique marble decorated with bronze allegorical figures by Canadian sculptor Jacobine Jones. The figures symbolize the seven major industries of Canada in the 1930s: agriculture, construction, electricity, fishing, forestry, manufacturing, and mining. The front door, made of cast bronze, was designed by Ulysses Ricci, and features images of Greek coins. Amphorae stand on either side of the entrance terrace. These urns were very controversial. Deputy Governor J.A.C. Osborne, who had been seconded from the Bank of England, likened them to “very large bombs” that “suggest the next war.” Originally, the urns came with stoppers. But shortly after the building was completed, the stoppers were removed, apparently owning to complaints that they were too phallic for public viewing.

Bank staff moved into their new quarters in late April 1938. By the time World War II began the following year, the new head office was already inadequate to accommodate the growing number of Bank employees, owing to the Bank of Canada’s being given additional responsibilities for managing and enforcing Canada’s foreign exchange controls through the Foreign Exchange Control Board. To accomodate the central bank’s burgeoning staff needs, wooden, temporary office buildings were constructed on the Sparks Street and Kent Street sides of the granite Bank headquarters. 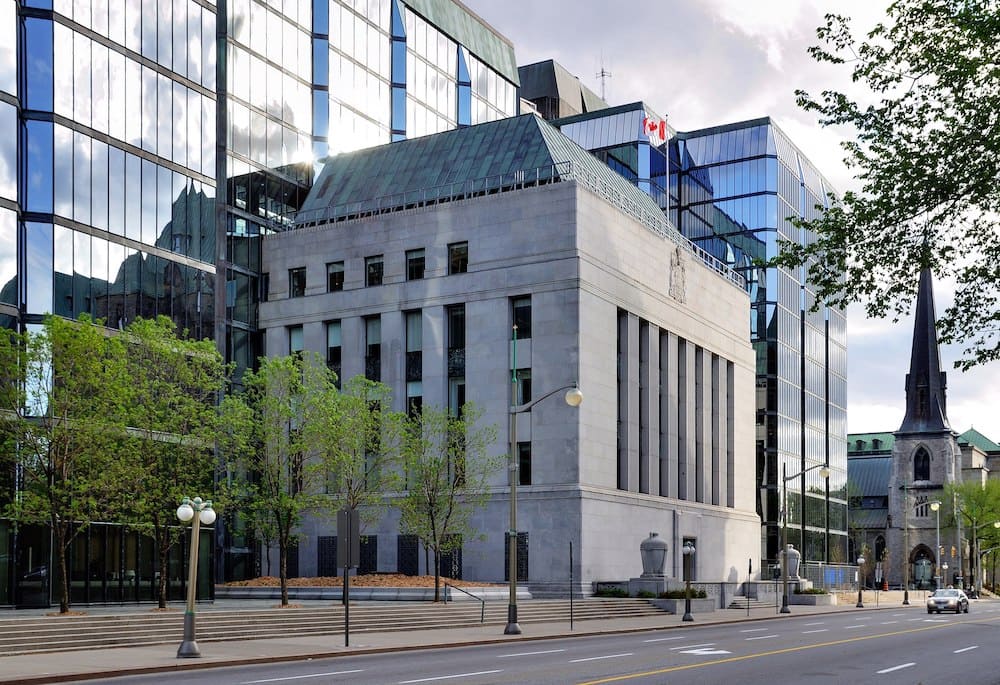 Bank of Canada headquaters, 234 Wellington Street, circa 2009. The orignal granite building nestles within the glass towers and atrium designed by Arthur Erickson,
Photo by Wladyslaw, Wikipedia.

During the 1970s, these “temporary” buildings were finally demolished to make way for the Bank of Canada building that we know today. Vancouver architect, Arthur Erickson, in collaboration with the firm Marani, Rounthwaite & Dick, the successor firm to the original Bank architects, designed two twelve-story, glass towers on either side of the original granite building. The towers were linked to the centre block by four pedestrian bridges, and a glass atrium. The original building was also extensively renovated at that time though care was taken to preserve the original Art Deco front lobby, executive offices and board room.

In 2014, work began on extensive renovations to the Bank’s head office complex. At an estimated cost of $460 million, the renovations will upgrade the building’s heating, plumbing, ventilation and electrical systems, strengthen the structure to meet today’s seismic standards, enable the building to meet current health and safety requirements, update its security systems, and improve energy efficiency and environmental sustainability. The most prominent new feature of the renewed Bank complex will be a glass pyramid located at the corner of Bank and Wellington Streets that will house the public entrance to the Bank of Canada Museum. The construction and renovations are expected to be finished by 2017.

Powell, James, 2005. A History of the Canadian Dollar, Ottawa: Bank of Canada.