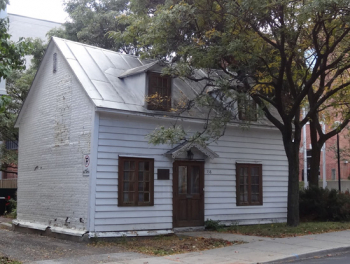 Rochon Residence at 138 St. Patrick Street, one of the oldest houses in Ottawa

A while back I told you about the Old Registry Office that was built in 1873. There are even older buildings around Ottawa and many of them can be seen in a quick trip around Lower Town and in Sandy Hill.. A cluster of them is viewable near the Basilica at Sussex and St. Patrick. The Basilica itself is one of the oldest surviving structures in Ottawa.

The oldest of all Ottawa buildings is the Bytown Museum beside the canal, built in 1826 as Colonel By's storehouse for the construction of the Rideau Canal. The Canal was officially opened 175 years ago, in 1832. Houses were built in Lower Town as the community grew and, as Canada became a nation, many upscale houses were built in Sandy Hill. This article will focus on a few of these house, but a good walking tour will show off even more.

... to tell the stories of some of the people who have lived here over the last 175 years.

There is a particularly well preserved house at 138 St. Patrick St. that belonged to Flavien Rochon. Built circa 1832, it is typical of a workingman's home of the era Before it became the property of Mr. Rochon, four sisters of the Grey Nuns of the Cross (now the Sisters of Charity of Ottawa) lived there from 1845-1851 Mr. Rochon was a carpenter by trade who also sculpted wood and who was involved in the construction of both Notre Dame Basilica as well as the Parliamentary library. The house was acqired by the NCC in 1965. His next door neighbour at 142 St. Patrick was Dr. Francois-Xavier Valade whose imposing house was built circa 1864. The Valade house is typical of of ancestral homes in Normandy Dr Valade lived there from 1866 to 1918, was one of Ottawa's first doctors and was also one of the doctors responsible for examining Louis Riel before Riel's 1885 trial in Regina.. The house was known as Le Balcon Blanc because of the white veranda overhanging the entrance. The original balcony was replaced at the beginning of the twentieth century.

Before leaving Lower Town for Sandy Hill, we should mention Notre Dame Basilica, the oldest church in the capital, built between 1841 and 1865 on the site of an earlier church built in 1832. It contains beautiful statues and woodwork carved by Louis Philippe Hebert, Phillipe Pariseau and Flavien Rochon whose house was described above. The tower of the Basilica stands nearly 55 metres high and the organ has more than 4000 pipes!. This just a small sample of buildings constructed before Canada became a nation in 1867.

Louis Besserer, a lawyer from Quebec, bought a large parcel of land that became the area known as Sandy Hill, one of the first “elite” neighborhoods in Ottawa. Besserer's land purchase took place in 1828, but the area did not really develop before Ottawa was picked as the site of Canada's capital by Queen Victoria in 1857. Growth accelerated after Confederation and the area became home to many politicians and senior government officials.

One of the oldest houses in Sandy Hill is the Besserer House built c. 1844 where L. J. Besserer lived from 1844 to 1866. It was later occupied by W. T. McDougal, one of the fathers of Confederation. The house is at 149 Daly Ave and is really the center of Sandy Hill development. Some changes to the verandas and the western face have taken place since 1844, but the house is still largely the same as when it was originally built.

Another older house is the Lyon house, built c. 1850. It's first occupant was a son of the original builder Colonel George Lyon Fellowes. Robert Fellowes, the son, was a member of Parliament and in 1876, the Mayor of Ottawa. The pamphlet put together by the Regroupment des Organismes du Patrimoine Franco-Ontarienne states as follows “The bay window, the magnificent wooden portico and the decorative flourishes on the facade make it one of the most charming residences. ” The Toller House, built c. 1875. Its first occupant, T. Fournier, was a creator of the Supreme Court of Canada and one of the first Justices. The next occupant, for whom the house is named, was Frederik Toller, Auditor General of Canada The next occupant was Louis-Phillipe Brodeur who was simultaneously Minister of Finance and Oceans, a Justice of the Supreme Court and Lieutenant Governor of Quebec. How he managed to handle all four jobs, we'll have to guess! The City of Ottawa designated the house an historic property in 1982.

These are only a few of the historic buildings in downtown Ottawa. Take a tour under the auspices of ROPFO or Heritage Ottawa and discover much, much more!