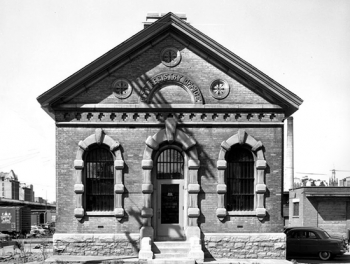 Part of this series on Ottawa in the "old days" will be to tell you about buildings that have been around for a long time. There is an active organization called Heritage Ottawa that specializes in commemorating the older buildings in the City. They team up with the City every year in May to make building tours available to anyone interested. The event is called "Doors Open Ottawa" and many interesting facets of both "Old" and modern Ottawa are presented. If Architecture and our relatively ancient buildings( for Canada) are of interest, Heritage Ottawa is a wonderful source of information. Some of us call them the "Building Protective Society" of Ottawa!

Many passers by on the Mackenzie King bridge or driving up Nicholas Street wonder what the old, rectangular building across the street from the old City Jail represents. It has been featured in several of the Doors Open Ottawa events and has a very interesting and chequered history. Owned now by the people who own the Rideau Centre, it began life in 1873 as the City Registry office where all official records of the City were kept. If you needed to know the history of a piece of land or building together with who owned or had owned it, you had to go to the City Registry Office. All official records of Bytown and the City of Ottawa were kept there. Inside the building is a unique set of rails, now covered, that allowed cast iron shelving to be moved back and forth as if on railway tracks.

When you first enter the building, you go into what was the office where clerks would take information or draw files from the storage room which was next through the building. After passing through the file storage area there are a number of small offices, much smaller than today's office space allotment. There is one small bathroom and a storage closet The whole building was heated by a pot bellied stove burning wood and coal that the clerks had to keep going. You can imagine what it was like on a cold winter day! In 1910 the registry office needed to get bigger, so a brand new one was built. This replacement is no longer with us, and the files we spoke of earlier are now at City Hall. The original registry office is still standing, while the replacement is long gone!

This building has had a number of uses over the years, not the least of which was to function as the original Bytown Museum from 1917 until 1951. The Historical Society, founded in 1898 as the Women's Historical Society of Ottawa needed space for its growing collection of artifacts and convinced the City fathers of the time that the old registry office would make an ideal Museum. The "railway tracks" of the file handling shelves were covered over and exhibits of things like Colonel By's furniture replaced them.

After 1951, the Museum moved to its present quarters in the old Commissariat Building beside the locks of the Rideau Canal. Did you know that in 2007, it will be 175 years since the Canal wasopened in 1832? Did you know the Canal is now a world heritage site?

The old registry office, with its very solid 12 foot foundations, to prevent thievery of critical land ownership records by tunneling , has served other purposes over the years. It was also a legal office and home of the Tourist and Convention Bureau of Ottawa, for example. Now it sits, cold deserted and damp until opened for "Doors Open Ottawa" Many people wonder what's going to happen to it next. The Rideau Centre people have talked about expanding the shopping mall and the old building would be in the way of such an expansion. We'll have to wait to see what transpires, but one alternative would be to encase the old building in the expansion and thereby keep alive a piece of the City's heritage Another alternative would be to move the building to another site There are probably others that readers can think of, but the economic issues may predominate and we will lose a familiar landmark. Only the future, not the past, will tell!.

Today's Historical Note: Did you know that on December 13 in 1907 the Women's Canadian Club was inaugurated by Governor General Earl Gray?

Questions:
(1) When did the Old Registry Office become the Bytown Museum? Answer 1917.

(2) How deep are its foundations? Answer 12 feet

(3) What other purposes has the building served? Answer Legal office; HQ, Ottawa Tourist and Convention Bureau