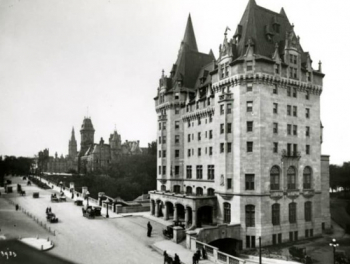 The Château Laurier Hotel with its fairyland turrets and copper roof is one of Ottawa’s iconic buildings. Majestically located beside the Rideau Canal locks on Wellington Street and backing onto Major Hill’s Park, it has breathtaking views of Parliament Hill, the Ottawa River, and the Gatineau Hills. Given its aristocratic bearing and central location, one can almost forgive tourists for confusing it with Canada’s Parliament buildings but a short walk away. Indeed, its architecture was deliberately chosen to complement the Gothic Revival style of Canada’s legislative buildings.

The hotel and the Union Train Station (now the Conference Centre), located across the street and connected via a pedestrian subway, were constructed by the Grand Trunk Railway Company (GTR) during the early twentieth century. They were lynchpins in a new trans-continental rail and hotel network being developed by the GTR to compete head on with the Canadian Pacific Railway (CPR) in the travel and hospitality industry. The Château Laurier was the first in a series of grand railway hotels that the GTR was to build, including the Macdonald Hotel in Edmonton and the Fort Garry Hotel in Winnipeg. For the federal government, which had an almost symbiotic relationship with the GTR, the hotel and train station were part of a broader plan to beautify Ottawa. They provided a striking entrance to the city, helping to realize Sir Wilfrid Laurier’s dream of turning it into the “Washington of the North.”

The preliminary design for the hotel was drafted by U.S. architect Bradford Lee Gilbert who had been hired in 1907 by fellow American, Charles Melville Hays, then General Manager and later President of the Grand Trunk Railway. Gilbert was famous for designing the “Tower Building” in New York City, that city’s first skyscraper. The French château architecture he proposed for Ottawa’s new hotel was a style popularized by the CPR which had previously built several grand baronial hotels, including the Château Frontenac in Quebec City, and the Banff Springs Hotel in Banff, Alberta. After submitting drawings of the proposed hotel to Hays, the railway tycoon fired Gilbert, replacing him with George Ross and David McFarlane of Montreal. However, the new Ross-McFarlane design was remarkably similar to that originally submitted by Gilbert, leading to charges of architectural plagiarism. Gilbert sued in 1908, and received $20,000 (close to $500,000 in today’s money) in an out-of-court settlement with the Grand Trunk Railway. Although their ethics were debatable, the controversy did not dent Ross and McFarlane’s careers. Their success with the Château Laurier demonstrated that Canadians were competent to tackle large architectural projects, hitherto typically given to Americans. Their company subsequently gained national prominence, winning major contracts across the country.

With a budget of $1.5 million, construction on the new hotel began in 1909 and was competed in 1912. It was named after Sir Wilfrid Laurier, the sitting prime minister of Canada. If this sounds a bit odd, it was. But it was an astute political move. Laurier had used his influence to carve out a piece of Major’s Hill Park for the site of the new hotel; an action that had provoked considerable controversy in Ottawa. Also, the railway owed its survival to the federal government that had provided it with millions in subsidies and loan guarantees. Even as the Château was being readied for its opening day in the spring of 1912, the GTR’s finances were on shaky grounds, with President Hays in London trying to find fresh funds for the railway. Indeed, the Grand Trunk was destined to be nationalized roughly a decade later to form, along with other bankrupt lines, the Canadian National Railway (CNR).

The grand opening of the hotel, with guests coming from across Canada and the United States, was scheduled for late April 1912. But catastrophe struck. Charles Hays and his family, which had accompanied him to England, elected to return to North America for the hotel’s opening on the RMS Titanic. They were the special guests of J. Bruce Ismay, the chairman of the White Star Line that owned the “unsinkable” liner. As we all know, the ship struck an iceberg four hundred miles south of Newfoundland and sank. More than 1,500 people perished in the cold North Atlantic waters. Although Hays’s wife and daughter survived the ship’s sinking, as did Ismay, Hays, his son-in-law, and his secretary drowned. Hays’s body was subsequently recovered, and was buried in the Mount Royal Cemetery in Montreal. Also lost in the sinking of the Titanic were dining room furniture and other decorations purchased in London by Hays for his new hotel.

Paul Chevré, the Belgain-born sculptor of the bust of Sir Wilfrid Laurier, which can be seen today in the lobby of the Château Laurier, was also aboard the Titanic. He boarded the ship as a first class passenger at Cherbourg, France. Chevré was on his way to Canada for the installation of his statue of former Quebec Premier Honoré Mercier on the grounds of the National Assembly in Quebec City, and for the unveiling of his Laurier bust in Ottawa. Chevré survived the sinking, having been persuaded to board the first life boat to be lowered into the water. Contrary to rumours, the bust, which was also making its way across the Atlantic, neither went down with the Titanic, nor was smuggled onto one of the Titanic’s life boats. Instead, it was safely shipped aboard another ship, La Bretagne, arriving in Ottawa in time for the hotel’s official opening.

On 1 June 1912, the magnificent Château Laurier and Union Station were officially opened to the public. With Hays’s death just six weeks before, the opening was a subdued affair. A silent toast was drunk to his memory. In attendance were senior executives of the Grand Truck Railway who played hosts at an informal banquet for the Parliamentary Press Gallery and a few journalists from Montreal, Boston and New York. That day, two hundred guests registered, with Sir Wilfrid Laurier the first to sign the hotel’s register.

The Château Laurier received rave reviews. The day after the opening, the reporter from Toronto’s Globe newspaper enthused “The latest word in palace hotels on this continent in point of chaste and impressive architecture, in point of beauty of interior decorations, and in point of completeness of arrangements for the comfort and convenience of guests, was spoken last night.” The hotel was indeed a masterpiece. Its walls were built of Indiana limestone, its lobby of Belgian marble, and its windows by Tiffany. Each of its principal public rooms on the main floor was thematically decorated: the lobby in simple Flemish style, the “palm room” in Renaissance style, and the waiting room in wainscoted oak, reminiscent of Tudor England. The dining rooms were fitted out in the manner of Louis XVI, with panels painted with classical subjects. In the basement, was the grill-room, bar, and barber shop, while on the mezzanine were the ladies’ parlours and the corridor writing room; a balcony overlooked the rotunda. As well as being beautiful, the hotel had all the modern comforts of the time, with electricity, and a state-of-the art kitchen and refrigeration plant. Also almost unheard of for the era, 155 of the hotel’s 350 bedrooms had private baths. The rest were equipped with washstands, complete with running hot and cold water. Room rates started as low as $2 per night, (equivalent to roughly $42 today).

The hotel immediately became the premier resting spot for visitors to the capital, eclipsing the old Russell hotel which subsequently fell on hard times. The Château also became the watering hole of choice for MPs and senators; so much so that it became known as the “third chamber of Parliament”—and not necessarily the least important being the location of many smoke-filled, back-room, political deals. In 1929, the hotel underwent a major expansion, adding its east wing and the installation of an art deco swimming pool. Another major refit occurred in 1983 that saw many of its small rooms enlarged to present-day standards.

In recent years, the hotel has changed hands several times. It’s currently owned by Capital Hotel Limited Partnership, a subsidiary of Larco Investments of Vancouver. Larco is a family-run private company co-owned by Amin and Mansour Lalji. The Laljis purchased it in late 2013 from Ivanhoé Cambridge, the real estate subsidiary of Quebec’s Caisse du dépôt et placement, for an undisclosed amount, but believed to have been in the range of $100-150 million.

Over its storied past, the Château has hosted kings, queens, princes and princesses, as well as a host of celebrities and politicians, including Shirley Temple, Marlene Dietrich, Winston Churchill, Charles de Gaulle, the Beatles, Roger Moore, and Nelson Mandela. R.B. Bennett called it home from 1930 to 1935 while he was prime minister of Canada. Yousuf Karsh, the famed portrait photographer, had his studio in the Château from 1973 until his retirement in 1992. The sixth floor of the Château was also the home of the Canadian National Railway Radio Station (CNRO) from 1924 until 1937 when the Canadian Broadcasting Corporation (CBC) took it over. CBC continued to broadcast from the same location until it moved to its new headquarters on Sparks Street in 2004. The Château Laurier Hotel was designated a national historic site in 1981.