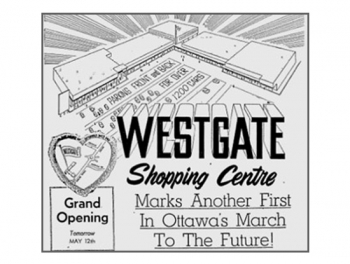 In the years following the end of World War II, North America experienced massive demographic and economic changes. The birth rate, which had fallen during the Great Depression, rebounded with the return home of millions of soldiers, and rising economic prosperity. Private consumption, suppressed by government during the war years due to the demands of a war economy, took off. Factories, which had previously turned out war materiel, began fabricating cars and other durables that were in turn snapped up by eager consumers with money in their pockets. With growing affluence, increasingly mobile families turned their backs on the cramped, downtown, apartment lifestyles of their parents to pursue the middle-class dream of a detached home with a yard in the suburbs.

Businesses followed the migration. The first modern, suburban shopping mall is reputed to be the Bellevue Shopping Square which opened in 1946 in Bellevue, Washington, a suburb of Seattle. But suburban development was often haphazard and ugly. In 1952, Vienna-born architect and urban visionary Victor Gruen co-authored an article in the magazine Progressive Architecture outlining a better, more holistic approach. Gruen, who is widely viewed as the father of the modern shopping mall, sought to replicate in the suburbs the public square found in old European cities. He envisaged the shopping mall as the centre of suburban social and economic life.

Encouraged by favourable tax treatment, developers in the United States enthusiastically embraced the mall concept, constructing shopping centres across the country; many were entirely enclosed and temperature controlled. Americans flocked in droves to these new temples of commerce. Unfortunately, the ensuing reality was often very different from Gruen’s dream. Suburban malls were often encircled by acres of asphalt parking lots, the very antithesis of what he had in mind. They also drew business away from downtown, contributing to the hollowing out of city centres.

Suburban shopping malls also became popular in Canada. The country’s first was the Royal Shopping Centre, located in West Vancouver in 1950. Construction of Ottawa’s first suburban shopping began in mid-1954. Called Westgate Shopping Centre, it was located in an empty field at the corner of Carling Avenue and Merivale Road across the street from a drive-in cinema. Its architects were Eliasoph & Berkowitz of Montreal. The driving force behind the mall was Lawrence Freiman, a member of a prominent Ottawa merchant family. His father, Archibald Freiman, had started A.J. Freiman Ltd, the city’s largest department store on Rideau Street, fifty years earlier. The construction of a large satellite store which anchored the new mall was a major, multi-million dollar gamble. While Ottawa’s post-war population was burgeoning, Carling Avenue was still not much more than a country road during the early 1950s.

Westgate Shopping Centre boasted eighteen stores laid out in an “L” design, with parking for more than 1,100 cars in front. An overflow parking lot for several hundred more cars was located behind the facility. Mall officials proudly noted that the lots would be kept clean by a mechanical sweeper. Although open-air, customers were protected by a twelve foot covered walkway that extended to the curb; the mall was later enclosed. Music was piped in through a concealed speaker system.

Anchoring the western end of the mall was Steinberg’s groceteria. Reputedly, this was the only place in Ottawa where bakery products were stamped with the day they were made. Steinberg’s advertised that once you enter their store you could feel that “gay, wonderful young at heart feeling.” Beside the grocery store was an ultra-modern Royal Bank branch with diffused florescent lighting and oak counters. Also located in the mall was a S.S. Kresge five-and-dime store, and Throop Pharmacy. Throop’s carried a complete range of veterinary instruments, medicines, and books in addition to the customary products found in drug stores. It also had a china department, a lunch counter, and camera department.The shopping centre’s largest outlet was Freiman’s department store which had two floors, connected by escalators, with a beauty salon and a snack bar on the main level, and an up-scale restaurant located on the lower level. The store, situated at the north-east corner, was decorated to the height of modern commercial design; Lawrence Freiman and the store’s manager had toured the United States for ideas that they could use in their new flagship store. Customers could use their store charge-plate (the predecessor of the credit card) at both the Westgate and Rideau Street stores.

There were also a range of smaller, more specialized stores at the mall. Reitman’s offered a full range of women’s fashions, while Tip Top Tailors offered “tailored-to-measure” and “ready-to-wear” suits for men. Two shoe stores offered footwear for the whole family. At Lewis & Sons, patrons could ensure the perfect shoe fit by using the company’s modern X-ray machine. A Handy Andy store offered automobile accessories, hardware, and sporting equipment. There were also a women’s lingerie store, a children’s clothes store, a flower shop, a milk bar, and a candy store. Paul’s Service Store offered “head to foot service” where customers could have their hats cleaned, their shoes re-heeled, and their clothes washed or dry-cleaned. At Miss Westgate restaurant, tired shoppers could enjoy steak and barbecue chicken. For private functions, the “Flamingo Room” was available for up to 45 guests.

When the Westgate Shopping Centre opened on 12 May 1955, it was an instant sensation. Customers arriving by car were greeted by uniformed attendants who directed traffic. At the inaugural breakfast at Freiman’s department store, Mayor Charlotte Whitton congratulated Lawrence Freiman for “this magnificent enterprise,” for his imagination, and his “faith in the west end of Ottawa.” Later, a “cavalcade” of a dozen cars carrying beauty queens made its way to the mall. At the front of the parade were television stars, Dick MacDougal and Elaine Grand. MacDougal was the host of the CBC news program Tabloid, while Grand starred on Living, a news-style programme devoted to women’s issues. In the second vehicle rode George Murray, a popular Irish tenor and performer of folksongs and ballads, and his wife, singer Shirley Harmer. Both had appeared on a number of CBC television programmes, including the variety show, The Big Revue. After performing for the crowd, the celebrities signed autographs for their adoring fans.

As Lawrence Freiman had hoped, Ottawa quickly grew out to and beyond the mall. Indeed, within two years, Carlingwood Mall was constructed three kilometres further west on Carling Avenue; Westgate was no longer the “western gate” to the capital. Today, roughly 300,000 people live within ten minutes’ drive of Westgate, more than justifying Freiman’s faith in the area. Fifty stores now call the shopping centre home, up from the original eighteen. But time has not been kind to the original mall occupants. All of the department stores as well as the grocery store are long gone; the Royal Bank branch is the sole survivor. The largest mall store is now a Shoppers Drug Mart, located where Steinberg’s used to be. Many of the mall’s tenants are small, service-oriented businesses; healthcare features prominently.

The future of Westgate Shopping Centre, and other suburban malls in Ottawa, is uncertain. Throughout North America, such malls have been steadily losing business to Walmart, big box stores, and on-line shopping, with some experts predicting their ultimate demise. Changing shopping habits and demographics have already claimed Ottawa’s Herongate Mall which was largely bulldozed in 2012. On the other hand, the opening of a huge Tanger Outlet mall in Kanata in October 2014 suggests that the suburban shopping centre has retained its appeal in the Ottawa area, though smaller traditional malls may continue to decline. Should Westgate and other neighbourhood malls disappear, their passing will be felt by many, especially seniors, for whom the malls provide a valued “community space,” where they can meet friends, and socialize, especially during Ottawa’s long winter months.

The Ottawa Citizen, “Eyes of All Ottawa Will Be Focused on Westgate Tomorrow,” 11 May 1955.