The Bank of Ottawa 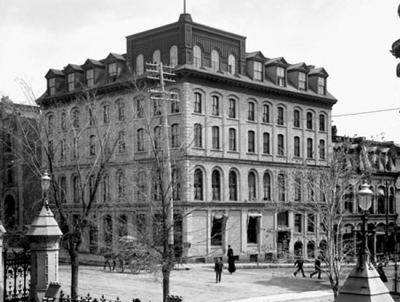 Victoria Chambers, 1902. First home of the Bank of Ottawa's head office, corner of Wellington and O'Connor Streets, across from Parliament Hill

Toronto has its Toronto-Dominion Bank. Montreal has its Bank of Montreal. One hundred years ago, Ottawa had its own Bank of Ottawa too. Of the nineteen Canadian chartered banks at the end of 1918, the Bank of Ottawa ranked in the middle of the pack. Its assets stood at $72.7 million, with paid-in capital and reserves of $8.75 million. In comparison, the Bank of Montreal, Canada’s financial goliath at the time, had assets of $558 million and paid-in capital and reserves of $32 million. Still, the Bank of Ottawa was a well-respected regional bank whose main area of operations were located in the City of Ottawa and in the Ottawa Valley on both sides of the river. One of its directors, Sir George Burn, who had previously been its general manager for most of the bank’s existence, was also president of the prestigious Canadian Bankers’ Association.

The Bank of Ottawa commenced operations at the beginning of December in 1874 with its head office in the Victoria Chambers at the corner of Wellington and O’Connor Streets across from Parliament Hill. (The location is now the site of the Victoria Building, constructed in 1928.) The new bank had one branch located in Arnprior. Oddly, the Arnprior branch began operations roughly two weeks before the main branch as the bank’s headquarters were not ready on opening day.

The Bank of Ottawa was started by a number of the area’s lumber barons with the express purpose of having a sympathetic financial institution in the region to fund the lumber industry. Widely known as the “lumberman’s bank,” its first president was James Maclaren, a lumberman from Buckingham, Quebec. Other directors included George Bryson, a lumberman who operated out of Fort Coulonge, Quebec, Robert Blackburn, owner of the Hawkesbury Lumber Company, and Allan Gilmour, a pioneering Bytown lumberman who owned one of the largest timber companies in Canada. Other directors, all prominent Ottawa businessmen and suppliers to the timber trade, included Charles Magee, an important wholesale dry goods merchant, C. T. Bate, a wholesale grocer, and George Hay who owned a hardware business. The Bank of Ottawa’s initial paid-in capital was $343,000, and had thirteen employees. After its first year in business, the bank paid a dividend of 7 per cent.

Bank of Ottawa, Head Office, Wellington Street, 1901. Decorated for the Royal Visit of the Duke and Duchess of Cornwall and York, the future King George V and Queen Mary
William James Topley / Library and Archives CanadaGiven the costs of starting a new enterprise, and the weak state of the Canadian economy during the mid-1870s, the profits of the new enterprise might not have justified such a dividend. Indeed, the bank temporarily cut its dividend in half. However, the new financial institution gradually expanded, building itself a profitable niche in eastern Ontario and western Quebec. By 1885, ten years after it started, the bank had a paid-in capital of $1 million, with a steadily expanding branch network in the Ottawa Valley. It opened its second and third branches in Carleton Place and Pembroke. Over time, it increased its annual dividend to 12 per cent (of paid-in capital).

Its first branch outside of the region was in Winnipeg in 1881. As this was before the opening of the trans-continental Canadian Pacific Railway, the bank had difficulties in transporting a large safe to the branch. After being told by the Grand Trunk Railway that it would take up to six weeks to deliver it to Winnipeg, the Toronto, Grey & Bruce Railway agreed to do it in fifteen days via trains to Minneapolis, Minnesota, and then to Emerson, Manitoba, with the last leg to Winnipeg via boat on the Red River. The Bank of Ottawa subsequently opened offices in Toronto and Montreal, Canada’s two financial centres at the time, as well as Vancouver. In 1884, it moved into its new head office building on Wellington Street a short distance from its original offices. (The site is approximately the vacant lot between the former U.S. Embassy building and the former Union Bank building at 128 Wellington Street.)

The salad years for the institution occurred between 1908 and 1913, when the bank experienced rapid growth, with its paid-in capital rising to $4 million. By the end of World War I, the bank had 96 branches, with more than 60 in Ontario and another thirteen in the province of Quebec, mostly in the Outaouais. 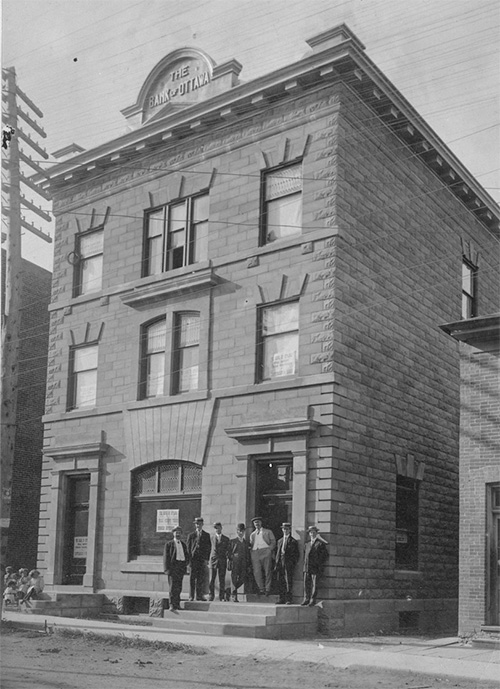 Bank of Ottawa, Kemptville Branch
Department of Public Works / Library and Archives Canada, PA-046461The deal had advantages for both banks. For the Bank of Nova Scotia, the merger brought it a thriving business with a solid reputation in areas where it had few branches, both in the Ottawa region as well as in western Canada where the institution was eager to expand. The two banks had competing offices in only eleven locations, most of which were in major cities where there was more than enough business to go around. The merger would also raise the Bank of Nova Scotia to fourth place in the Canadian bank rankings, behind only the Bank of Montreal, the Royal Bank of Canada, and the Bank of Commerce.

For the directors of the Bank of Ottawa, who had brushed off earlier overtures by other banks, an alliance with the Bank of Nova Scotia offered “exceptional advantages.” The merger was a way of entering new more profitable areas at less expense. Alone, the bank had a choice of trying to expand organically in the Ottawa region, or through the expensive route of establishing new branches in unfamiliar areas. But by joining the Bank of Nova Scotia, it could take advantage of the growth potential of a bank that had branches across Canada, Newfoundland, the West Indies as well as operations in the United States. The Bank of Nova Scotia was also better diversified, reducing the consequences of an economic slowdown in the Ottawa region. This was an astute move as Canada experienced a sharp recession in the immediate post-war years.

Despite the many attractions of an alliance, there was one thorny issue to resolve—the name of the new institution. The directors of the Bank of Ottawa were loath to see the venerable name of their institution disappear. The Ottawa Evening Journal reported that for forty-four years, the Bank of Ottawa’s name was “identified with practically all of the best businesses and biggest industrial enterprises in central Canada.” At the same time, the directors of the Bank of Nova Scotia were equally unwilling to see the end of their bank’s storied name that extended back to 1832. For a time, consideration was given to calling the merged bank “The First National Bank of Canada.” However, in light of the Bank of Nova Scotia’s considerable foreign connections, the Bank of Ottawa’s directors reluctantly concluded that it would be a mistake to change names; a view shared by Sir William White, the Minister of Finance, who gave his blessing to the merger.

Bank of Ottawa, $5.00 note, November 1880, hand-signed by James Mclaren, President and George Burn, Cashier. Note the lumberjacks in the central vignette
Bank of Canada Museum.Without any forewarning of the pending financial nuptials, the announcement of the merger created a sensation in Canadian financial circles. In Ottawa, there was consternation, especially when it became known that the Bank of Ottawa name was to disappear. One businessman, Mr. N. Poulin, said it was a “murder” not a merger. Another called it a “submerger.” Some worried about their access to credit; the Bank of Ottawa had an uncommonly good reputation for being considerate and liberal in its business decisions. One businessman was concerned that after years of dealing with the Bank of Ottawa he would have to start afresh with the Bank of Nova Scotia. Many regarded the bank as an important city asset. Its loss would be a major blow to the prestige to the nation’s capital.

The disappearance of the Bank of Ottawa name would also mean the withdrawal of almost $7 million in Bank of Ottawa banknotes from circulation and their replacement by Bank of Nova Scotia notes. Prior to the formation of the Bank of Canada in 1935, every chartered bank had the right to issue their own distinctive banknotes in the amount of its paid-in capital and reserves. While the circulation of bank notes did not represent a large portion of a bank’s business, it was quite profitable. (A bank earned the difference between the cost of printing and circulating its banknotes, and the interest earned on the assets backing the notes.) It also provided useful advertising for the bank, and in the case of the Bank of Ottawa, for the city as well. Mr Poulin commented that “with a roll of Bank of Ottawa ten dollar bills in his pocket a man could go to any part of the world and feel comfortable and safe.”

At a hastily-called meeting of Ottawa retail merchants, a resolution was passed citing the merchants’ belief that the departure of the head offices of Ottawa’s only financial institution would have “a decidedly bad effect” on the city. More broadly, they were concerned that the concentration of more financial power and decision-making in Toronto and Montreal would be bad for the country. (There had been a rash of financial takeovers, including the acquisition of the Traders Bank of Canada, the Quebec Bank and the Northern Crown Bank by the Royal Bank of Canada, as well as the acquisition of the Bank of British North America by the Bank of Montreal.) Some thought that a committee should be struck to approach the directors of the Bank of Ottawa to get a better understanding of their decision. Some even pledged money to buy shares in the bank in an effort to stop the merger. Still others wanted to approach the Finance Minister to get him to reverse his decision to permit the merger. They noted that an attempt by the Royal Bank of Canada to acquire the Bank of Hamilton a few years earlier had been stopped by the Minister on the grounds that the merger was against the national interest. Mr A. E. Corrigan, the managing director of the Capital Life Assurance Company likened a bank to a “public utility” that had been given a franchise to serve the people. Consequently, the people had a right to protest if a merger was not in their interest. One person alleged that the reason why the Finance Minister approved the merger was because the Prime Minister, Sir Robert Borden, was a shareholder in the Bank of Nova Scotia.

Outaouais’s Forest History, 2017, “The Bank of Ottawa and the financing of the forest industry,”.