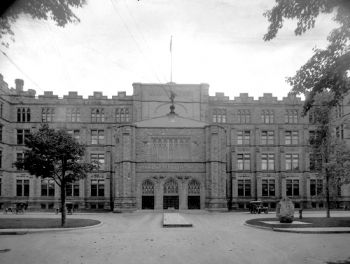 he Victoria Memorial Museum Without its Tower

At the end of Metcalfe Street between McLeod and Argyle Streets can be found the Canadian Museum of Nature, housed in a magnificent baronial building with beautiful stained glass windows. Constructed over a several-year period during the first decade of the twentieth century, the edifice’s official name is the Victoria Memorial Museum Building, in commemoration of Queen Victoria who died in January 1901. Within weeks of her death, the government chose to honour her reign by the construction of a museum.

On 10 May, 1901, a sum of $50,000 appeared in the supplementary estimates for the 1901-1902 fiscal year for the commencement of work on the Victoria Memorial Museum. After considerable debate, the appropriation was approved by the government of Sir Wilfrid Laurier, though the Conservative opposition complained about the lack of a definitive plan for the building. The government was also uncertain of its location. It favoured siting the building at Major’s Hill Park, with a bridge across the Rideau Canal connecting the Park to Parliament Hill, roughly where the Château Laurier Hotel is situated today. However, others thought Nepean Point might be a good location. Still others objected to both locations arguing that the land should be conserved for parklands. They preferred a location somewhere in the south of the city. Mr. Joseph Tarte, the Minister of Public Works, assured the House that no work would commence until he and his colleagues were convinced they had found the best design and the best site for the new building. To that end, he had sent David Ewart, the Chief Dominion Architect, to Europe to look into museum designs.

The site finally selected for the new museum was a property owned by the Stewart family a mile due south of Parliament Hill. Located there was a stone building called Appin Place surrounded by fields and gardens. Appin Place was a homestead that dated back to 1856, though actual construction of the house was delayed until 1862 owing to the death of the property’s owner, William Stewart, who had been the Member of Parliament for Bytown in the Province of Canada legislature. Appin Place, whose paddock was sometimes used as a cricket pitch, was a well-known landmark. It was surrounded by a massive cedar hedge that was noted for its beauty. The hedge had been transplanted from a nearby swamp during the 1840s. The house itself was built on the highest point of land in “Stewarton” in a direct line and level with the Centre Block on Parliament Hill. Appin Place was reportedly where Lord Dufferin had presented the colours to the Governor General’s Foot Guards in 1874. The government acquired the land for $73,500 at a sheriff’s sale in 1903 or early 1904. 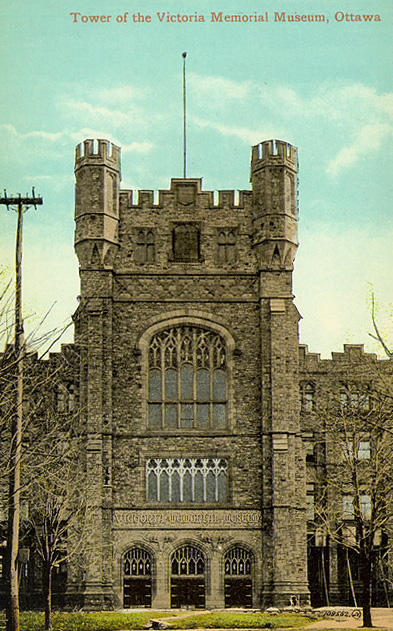 Post Card of The Victoria Memorial Museum, before 1915
Valentine & Sons’ Publishing C. Ltd, London, Toronto Public Library.The museum was designed by David Ewart, and built by George Goodwin of Ottawa. Goodwin had won the contract for building the museum with his bid of $950,000, excluding the cost of the electrical work, heating and furnishings. His was the lowest of four bids on the government contract. He would later come to rue winning the contract. The total cost of the building came to roughly $1,250,000, equivalent to more than $27 million in today’s money. Goodwin had previously worked on other public works projects, including the construction of the Trent Valley and Soulonges Canals. The new museum measured 430 feet by 169 feet with a tower 97 feet high. Its walls were built using Scottish work masonry in Nepean brown stone, with trimmings in Nova Scotia red stone. Credit Valley stone was also used. The four-story building was fire-proof with its floors made of porous terra cotta covered with concrete. Wooden sleepers were set into the concrete to which wooden floors were fastened. The walls of the basement were lined with enamelled brick.

Demolition of the old stone Appin Place took only three days in mid-April 1905. Work on the foundation of the new museum commenced almost immediately. The structure was scheduled to take four years to build. But problems, disputes, and tragedy dogged the construction which took longer than expected. Goodwin wanted to substitute stone quarried in Ohio for the Nova Scotia stone, but was overruled by government; the contract called for Canadian stone throughout. In 1908, a labourer fell to his death while working on the building. He apparently lost his footing when he was 70 feet up on the girders. While he survived the fall, he sustained grievous injuries and died at St. Luke’s Hospital. By 1911, six stone cutters who had worked on the building had died from “stone cutters’ lung disease”—an illness, now called silicosis, caused by the inhalation of dust—that causes shortness of breath, cough, bluish skin, and ultimately death.

The name and organization of the new museum also proved to be controversial. A delegation of Ottawa’s finest, including Thomas Ahearn and Warren Soper (the partners who owned Ottawa’s electrical company and electric railway), J.R. Booth, the timber baron, and Erskine Henry Bronson, after whom Bronson Avenue was later named, appealed to the Prime Minister. They wanted the new museum to be called the National Museum of Canada that would report to a special government commission comparable to the British Museum in London and the National Museum in Washington D.C. Laurier promised to consult his Cabinet. The appeal failed.

As the building was finally nearing completion in early 1911, cracks began to appear in the front tower owing to settling. A slight separation was also noted between the tower and the main building. The Ottawa Evening Journal ominously noted that the contractor, George Goodwin, was the builder of the Laurier Tower, an addition to the West Block on Parliament Hill erected a few years earlier that had subsequently collapsed. Government engineers initially thought that the cracks in the museum would soon be remedied. However, they proved to be wrong. By late 1911, cracks had appeared on both sides of the entrance rotunda. Some were as much as five inches across. The cracks were plastered over several times, only to reappear. In late 1913, the Department of Public Works denied that it was considering dismantling the tower. However, by the summer of 1915, it became obvious something had to be done to ensure public safety. There was even talk of tearing down the entire building. In the end, engineers decided that while the building could be saved, the tower had to come down. It was simply too heavy to be supported by the foundation which rested on unstable clay. Goodwin, the builder, who reportedly lost a fortune on the building, died later that same year. It is said that he had tried to warn the government about problems with the building’s specifications but his concerns had been brushed aside. 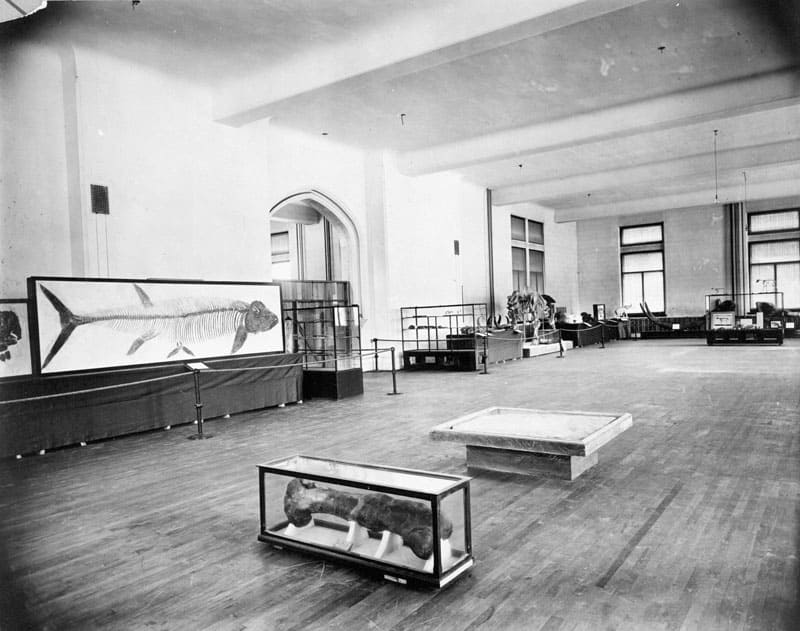 Inside of the Victoria Memorial Museum, 1913
Geological Survey of Canada/Library and Archives Canada, C-065507.Despite worries about its solidity, staff moved into the Victoria Memorial Museum in 1911 in order to get ready the many artifacts in the government collection. This included the Geological Survey’s collection of Canadian ores and minerals, fossils, stuffed mammals and birds, insects, as well as First Nations’ handicrafts, phonographic records of songs of indigenous peoples, as well as antiquities and other objects of scientific value. The National Gallery of Canada, with its over four hundred paintings, sketches, etchings and sculptures, also moved into the Museum. In 1913, the Museum acquired a complete skeleton of a “duck-billed” dinosaur, of the family Trachodonatae, discovered in the Red River Valley of Alberta. According to the Ottawa Evening Journal, the fossil was three million years old. Today, this animal is known as a hadrosaur, the old name of Trachodon no longer being used. The fossil, which can still be seen at the Museum of Nature, is actually about 65 million years old.

When the museum first opened its doors to the general public is a bit murky. The National Gallery of Canada located in the Museum building opened in mid-May 1912, from 9 am – 5 pm Monday to Saturday. It is probable that the Geological Survey’s collection opened at the same time. Admission was free. Owing to the great popularity of the museum, opening hours were subsequently extended to Sunday afternoons despite opposition from some clergy.

When the Centre Block on Parliament Hill was gutted by fire in early 1916, the Victoria Memorial Museum was quickly fitted out as the temporary home of the Senate and House of Commons. The House of Commons was located in the lecture hall while the Senate was housed in the hall previously devoted to fossils and extinct animals, a fact that caused great hilarity. Some wags noted that little had changed. Parliament met at the museum until 1920. The previous year, the body of Sir Wilfrid Laurier had laid in state in the temporary House of Commons chamber.

Over its life of more than 100 years, the Victoria Memorial Museum building has undergone two major renovations. During the early 1970s, it was closed to allow for workmen to stabilize the building which was still sinking into the Ottawa clay that lay beneath it. In 2010, a major building renewal and renovation took place. A 65-foot glass tower was installed in the same location as the old tower that was torn down in 1915. It was unveiled by Queen Elizabeth in 2010 and is called the “Queen’s Lantern.”