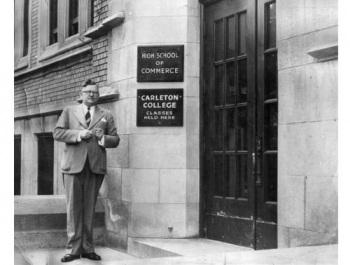 Maxwell MacOrdum, president 1947-55, at the entrance to the High School of Commerce (now Glebe Collegiate), where the first evening classes were held.

In the late 1930s, Ottawa YMCA, comprising of senior civil servants and wealthy businessmen, wanted to help young people continue their education which was disrupted by the depression. In June 1939, the Ottawa YMCA board appointed a committee with Hugh Keenleyside as the chairman to plan a college program like other YMCA’s in Montreal and the US. Though they were side-tracked by the war, the committee believed that an evening college was needed in Ottawa.

“According to Henry Marshall Tory, Carleton College had its beginnings when he met William Connor by chance on an Ottawa Street Corner in the fall of 1941.”

Soon after Tory’s meeting with Connor, he met with the YMCA committee – Hugh Keenleyside, John Robbins, and William Connor – to discuss what to be done and how to proceed. Given that the University of Ottawa and St. Patrick’s College were Roman Catholic institutions, non-Catholic individuals had to move out of Ottawa to attend university. Tory along with the committee agreed that an educational institution without any religious denominations was needed in the city. In November 1941, the Ottawa YMCA board established the College Grade Education Committee with Tory as the chairman and the rest as members. The board expanded in January the following year and they met almost every week over the next few months and by May 1942, the articles of association were approved. On 18th June 1942, the Ottawa Association for the Advancement of Learning held its first meeting at the Chateau Laurier and was attended by thirty of its donors. The meeting was fruitful in that the slate of twenty-one to function as the board was elected and nominated Henry Marshall Tory as the president of the college.

“The College would also need a name. There was no shortage of suggestions….“Carleton seemed appropriate because of the proximity of Carleton county and Sir Guy Carleton”, the newspaper (Ottawa Citizen) reported. Dr. Tory said: ‘Well, gentlemen, unless someone has a better suggestion, we’ll christen it Carleton College’.”

Everything was in place by August 1942. In September, four evenings were set for registration and some fifty students showed up on the first evening and more than seven hundred students had enrolled three days later. The college offered evening (part-time) classes in arts, science, public administration, and journalism at the High School of Commerce, now the Glebe Collegiate. (The High School of Commerce was moved to its own building in 1929 on the west side of the Glebe Collegiate. The site where the school sat from 1967 to 1990 now houses the Adult High School). The college had no formal inauguration ceremony and President Tory addressed the five hundred students in the High School of Commerce’s auditorium before the classes began and said “You’re here and I’m here. And the College is Open”.  While the founders of the college intended to give education opportunities to young men, it turned out that two-thirds of the students enrolled were women. 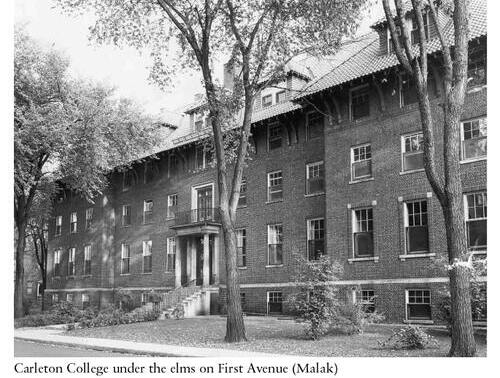 Carleton College became a degree-granting institution in 1944, when it was decided to offer a Bachelor of Public Administration to any student who has completed the college’s second year or completed ten courses offered by the college. The Department of Veteran Affairs wanted to provide university places for returning veterans and Carleton College could offer it. With the addition of day courses for returning veterans, the college acquired its own building, the former Ottawa Ladies College on First Avenue in August 1946 and integrated the day and evening courses (operating at the High School of Commerce) to be taught in the same building. This marked the college becoming an institution where full-time professors were hired, and full-time students were enrolled. The same year, the college held its first convocation and diplomas and degrees (six bachelor’s degrees – three in journalism and three in public administration) were awarded to thirty-three students.

“Not only were these the first degrees that Carleton had ever awarded, but the degrees in journalism were the first to be awarded in Canada.”

While this guaranteed Carleton college’s place in the future of education in Canada, the future of the college was unclear for the next decade. Expenditures depended mainly on student fees, donations from Ottawa citizens or unpredictable government grants. The college finally emerged from the threats of bankruptcy in the 1950s when the government began providing annual grants. In addition to financial setbacks, the college’s legal status came into question in 1950 when the Ontario College of Education (OCE) refused to accept Carleton’s graduates. The minister of education suggested that he would accept Carleton had acquired the academic status if the National Conference of Canadian Universities (NCCU) admitted the college as a member. Carleton College was provided degree-granting powers officially on November 4, 1952. The college was designated as a university by the provincial government in 1957. 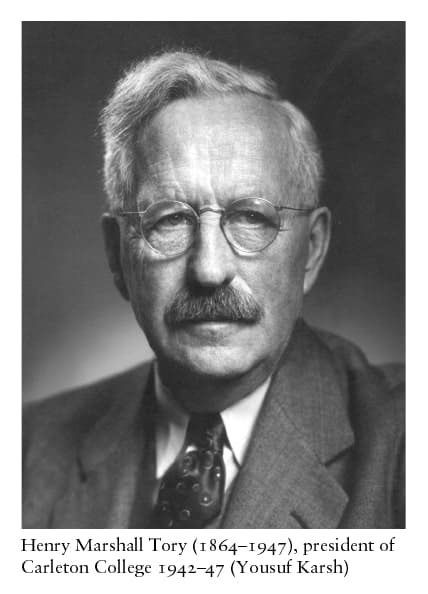 In 1947, Harry and Wilson Southam and Colonel C.M. Edwards donated thirty-nine acres of land to the south of Dow’s lake as the future site for the college. At that time, the college board considered selling the thirty-nine acres land as President Maxwell MacOdrum, who succeeded Tory after his death in 1947 believed the programmes offered could be best developed in the Glebe area and no move can be recommended until future enrollments can be calculated accurately. Though the board agreed with the President, things changed when Harry Southam offered to sell two adjoining lands of thirty-seven and sixty acres to the college in December 1952 for $133,900. James Coyne, the governor of the Bank of Canada and the college board’s chairman agreed to the sale quickly even when the college’s future was uncertain. He believed that the construction of a college would be approved at the site as Jacques Gréber, the architect for the planning of the National Capital Region, was open to the idea for development of an educational institution. In January 1954, the National Planning Commission and the Federal District Commission approved the construction of a university in the Dow’s lake site.

With increasing enrollments and the need to expand facilities, Carleton University was moved to its current location in 1959. The first three buildings to be constructed on the Rideau River campus were the Henry Marshall Tory Building, the Maxwell MacOdrum Library, and the Norman Paterson Hall. The campus was designed by a team of architects: Hart Massey, Watson Balharrie, D’arcy Helmer, Henry J. Morin, Eric Arthur and John Bland. The present Rideau River campus was officially opened on February 12, 1960, by Leslie M. Frost, the then Premier of Ontario. The university has expanded steadily over the years and today, the university provides education to over 30,000 students and has more than 900 faculty members.

Carleton University. (n.d.). Office of the president. Retrieved from https://carleton.ca/president/

Story written by Nivethini Jekku Einkaran, an architectural conservation graduate from Carleton University. She has an undergraduate degree in architecture from India and is a registered architect in India where she worked as a junior architect before moving to Canada. Nivethini is a volunteer with The History Society of Ottawa.