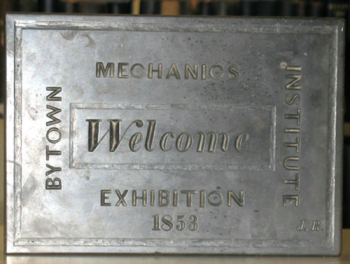 Not very many people in early Ottawa had the educational advantages of today's society—many wished for it, but had to leave school, where it existed, as soon as they were of money earning age Those who could afford a classical or technical education tended to be those whose parents had already had some measure of success. Technical knowledge came through apprenticeship and on the job learning. Women and girls were almost excluded from the education systems that did exist. However, a good portion of those already educated believed that all persons were educable and education was the key to a better society, both socially and economically.

Most factory workers preferred relaxing in the local pub with their buddies.

In the early 1820's organizations called Mechanic's Institutes were begun in Great Britain and the United States, dedicated to “improving the mind of the working class”. In Bytown in the 1840's several attempts were made to establish similar institutions but final success did not come until 1853. The institutes were aimed at factory workers but were more used by clerks and shop assistants. After the typical 12-14 hour day of the times. Most factory workers preferred relaxing in the local pub with their buddies. Late closing on work days led to letters to the Bytown Gazette in 1837 suggesting both a movement for earlier closing and the opening of a Newsroom or a library. By 1838, as it happened, two Newsrooms had opened—one in the Upper Town's British Hotel and one in the Lower Town's McArthur's Hotel. The Lower Town Newsroom closed by 1844, but there is a record of a gathering of “clerks” in the British Hotel in 1845.

On January 28, 1847 there was a meeting of prominent citizens in the Oddfellow's Hall to create a Bytown Mechanic's Institute. All resident clergymen were members of the founding Council as were magistrates, factory owners, the current Mayor (John Scott) and a past Mayor and City Clerk. Despite their best efforts at fund raising and the purchase of a collection of books (210 available in 1848), the Institute became defunct in 1849. The organizers wanted to show Bytown as progressive. In early 1853, a provisional committee with the strong support of Robert Bell publisher of the Ottawa Citizen was struck to start a “Bytown Mechanic's Institute and Athenaeum”. Again, prominent men were involved. Judge C. Armstrong, Dr. S Sewell, Elkanah Billings, Richard W. Scott Mayor H. J. Friel and Thomas McKay, among others,. formed the committee. At the time, Bytown was a flourishing town of 8000 souls.

A Province of Canada Act was passed in 1853, establishing the Mechanic's Institute in Bytown. Fees were set at $5 per annum. While this fee may seem small today, it could be as much as one week's salary for a working man then. This may have been a factor in the later history of the Institute. We now enter a phase when the idea of training for working class people gradually gave way to a club largely for intellectuals of the day. The organization apparently died in 1907 as professional societies, museums and public libraries proliferated in Ottawa. The highest point of Institute membership was 438 in 1866/67. At a general meeting in 1867 a recorded vote of 109 attendees showed the following mix—13 professionals, 16 merchants, 12 civil servants, 3 lumber merchants, 16 in service industries 10 bookkeepers and clerks, one farmer, 4 labourers, 2 servants, 2 gentlemen and 20 where no occupation was given. Hardly representative of workers!

The Society's activities in the1880's and the 1890' were confined to winter lectures and the maintenance of the library. In 1902, the President still felt the Society's activities were useful but the handwriting was on the wall with the opening of the Carnegie public library in 1906. In November 1906, Dr. Otto Klotz, the President still promoted the work of the Society but stated “the great mass of the people is not hungering for intellectual development but is rather in search of amusement entertainment and forms of diversion as involve little or no mental effort”.

R. Forbes Hirsch who researched the history of Mechanic's Institutes had the following comments in a 1991 publication. “It cannot be said that the Institute suffered from competition in its early days for the limited leisure time of the residents they hoped to attract—the only competition were the pubs, worship services and other church activities. ” Hirsch felt that what really evolved was a social club where the lecture topics were of more interest to better educated middle and upper class citizens. For workers who put in long hours by today's standards and who really couldn't afford the fees charged, th eidea was great, but the implementation suffered from many problems.

Published in Important Services in Ottawa
Tagged under
back to top