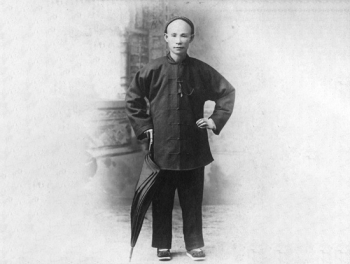 Like most countries, Canada has a long, history of racial discrimination and prejudice against minority groups that sadly persists in varying degrees to today. Visible minorities, including Canada’s indigenous peoples, and immigrants of African and Asian descent, have been particularly targeted as have been religious minorities, such as Jews, Muslims and certain Christian sects, and homosexuals. Chinese immigrants were the subject of draconian laws aimed at curtailing their numbers during the nineteenth and twentieth centuries. They only received the right to vote in 1947. Canada’s race-based immigration system remained in force until 1962. Chinese immigrants and Canadians of Chinese descent were also barred from many professions, were forbidden from buying property in certain jurisdictions, and were subject to degrading segregation laws.

The first major wave of Chinese settlers to Canada came from California during the 1850s, attracted by the gold rush in the Fraser Valley of British Columbia. Immediately, they faced discrimination. British Columbia denied Chinese immigrants the right to vote. Later, the federal government did likewise. Another wave of Chinese entered Canada to help build the Canadian Pacific Railway during the 1880s. The Chinese labourers worked for meagre pay in appalling conditions. Many perished. Bowing to pressure from British Columbia, the federal government passed the Chinese Immigration Act in 1885, instituting a $50 poll tax on Chinese immigrant labourers, roughly equivalent to the £10 poll tax imposed on Chinese immigrants in Australia and New Zealand. It was less draconian, however, than the Chinese Exclusion Act than effectively barred Chinese immigration to the United States. The poll tax was a sizeable financial impediment to Chinese immigrants who only earned about $300 per year, and often supported dependents back in China. Most Chinese men who worked on the railways and elsewhere could not afford to bring their wives and families to Canada. This led to broken families and a serious male-female imbalance within the Chinese community. The Imperial government in London, which was at the time in the process of negotiating with the Chinese government over Burma, was not amused. It was, however, reluctant to impose a veto over the Canadian legislation. The Evening Journal thundered in 1886 that “Canada was not interested in Burmah [sic] but she was in the Chinese problem in British Columbia and if the majority of her people desires to shut the Mongolians out, or tax them, it is their own business and nobody else’s.”

Organized labour in Canada was opposed to Chinese immigrants. In Vancouver, the Knights of Labour passed strong resolutions in 1886 against them and organized boycotts of Chinese businesses. A few years later, the Trade and Labour Congress sent a deputation to Sir John A. Macdonald demanding the prohibition of Chinese labour in Canada, saying they were an “undesirable class of immigrants.” The Prime Minister told the delegation that while it was the policy of the government to discourage Chinese immigration, there was no desire to actually prohibit the Chinese from entering the country. Macdonald also rejected a second demand that mines be banned from hiring Chinese workers.

In addition to boycotts, there were nasty anti-Chinese riots in several Western Canadian cities, including Vancouver and Calgary. But, not everybody was opposed to Chinese immigration. Charles Kaulbach, a Conservative member of parliament from Nova Scotia remarked in 1887 that the Chinese “were an essential element in building up the Province of British Columbia.” Despite its earlier remarks, Ottawa’s Evening Journal appears to have had a change of heart in 1887, coming out in support of Chinese merchants who were protesting the $50 poll tax. The newspaper said that the tax was “a political sop to sectional interests,” a “short-sighted folly,” and an “inexcusable injustice.” Subsequently, in response to an anti-Chinese tirade in the Victoria Times, which the Journal claimed was plagiarized from a “slavery paper published before the American [civil] war,” it wrote:

The tendency of English-speaking races to compete with other races by means of clubs has always been interesting. When we want to own negro slaves, or to kill off red men or to boycott Chinese, we cannot only prove ourselves morally right, but woe be to any one who argues with us about it! The rant of the Victoria Times sounds familiar, in fact exceedingly chestnutty. 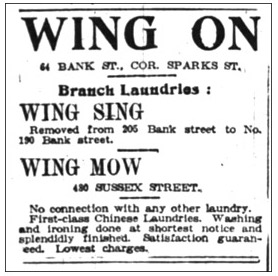 Chinese Laundry advertisement
The Evening Journal, 21 April 1897The first Chinese to come to Ottawa arrived in 1887. In October of that year, the Evening Journal noted that there was a new type of business sign on Spark’s Street—a Chinese laundry called “Wing On.” The following month, the newspaper reported that the city’s Chinese population was growing with the arrival of Chung Kee who was residing on Elgin Street. (In the 1891 census, there were only five Chinese residents of Ottawa, all men, out of a mere 97 in all of Ontario.) The newspaper reported that Chung had established a laundry, the third to have been established by Chinese over the previous six months. Coincidently, the signs of the laundries were all similar. Each used white lettering on a red background. Wing On also made the news the following year when he launched a legal claim against a local company that had supplied the laundry with washing machines. When one broke down after only a week in operation, the supplier refused to honour his warranty. Who won the case is not known. The Wing On laundry went on to become very successful, and by the late 1890s had two subsidiary stores, one on Sussex Street and another on Bank Street, and was a regular advertiser in local newspapers.

In 1888, official Chinese visitors to Ottawa, ran afoul of the $50 poll tax. Three “Celestial” commissioners, Y. l. Foo, H.K. Foo and H.B. Sanamissa, who were appointed by the Imperial Chinese Government to investigate Western agricultural techniques, were stopped at the Canada-U.S. border while on their way to the nation’s capital, presumably to visit the Central Experimental Farm. The three commissioners refused to pay the $50 poll tax. Being government officials, they were supposed to have been exempt from the tax. However, the Canadian immigration officers at the border balked at letting them proceed, and only allowed them to continue their journey under a police escort. Their baggage was impounded as security, and a policeman slept outside their door at the Russell Hotel where they were staying. The Customs Department subsequently backed down, apologized, and returned their luggage.

In 1895, anti-Chinese sentiment in Ottawa began to take on more serious character. The Ottawa Trades and Labour Council passed a motion that all union men should refrain from using Chinese laundries and instead patronize “our own laundries run by white people.” Delegate St. Pierre, who introduced the motion, which was seconded by Delegate Chapman, reportedly said that “The Chinese were driving white people out of British Columbia and they would do the same in Ottawa.” He added that the Chinese were a curse to the city and that the sooner they were driven out the better.”

Two years later, on the 20 April 1897, Ottawa’s City Council voted to impose a $10 per year tax on Chinese laundries. Given the amount of water that laundries were using, the Council’s Waterworks Committee had earlier recommended that Council impose a $10 per year tax on “all Chinese laundries, or small laundries” using city water. However, when the recommendation came to the Board, the measure was limited to just Chinese laundries on an amendment moved by Alderman McGuire, seconded by Alderman Powell. Alderman McGuire, who was the unofficial labour union representative on City Council, said that the measure was a “matter of protection to the interests of our people [italics added] who are striving hard to make a living,” and that Ottawa realized nothing from the Chinese.

Others spoke up in defence of the Chinese. Alderman Campbell said that the Chinese were law-abiding, and always paid their water fees on time. Alderman S. Maynard Rogers thought that if the motion passed, Ottawa would become a laughing stock and didn’t want to act towards Chinese the way they do in the United States. Other councilmen calling the tax “unBritish, “unChristian,” and “unjust.” Nevertheless, the amendment passed on an eleven to six Council vote. The next day, the headline in the Evening Journal read No Pay Taxee; No Washee: Council drops on the Chinese.

Local Chinese residents were rightly appalled. Many gathered at Hong You’s laundry on Bank Street to discuss the tax and decide on what to do. It was agreed that they would find a lawyer and take the City to court on the grounds that Council could not impose a tax on any particular class or nationality. Although this was many years before the rights and freedoms of Canadians were constitutionally protected, the Chinese community had a good case.

At Council, Alderman Campbell tried to overturn the vote. But on two occasions when he raised the issue, supporters of the measure left the Council Chamber and broke the quorum. The issue had to be postponed. Campbell’s amendment, which would have applied the tax to all laundries not just Chinese ones, finally came to vote at the end of May 1897. It was defeated on a twelve to eight vote, thus leaving the discriminatory tax in place. The Evening Journal said that the tax was probably illegal, and seemed “in ill accord with British fair play.”

Behind the scenes, people must have been getting worried about potential law suits and bad publicity. An advisory committee was established to examine the issue that included the Mayor Samuel Bingham and the City’s solicitor M. O’Gara. In late June, the committee issued its report to Council saying that the committee was “of the opinion that the charges for the water rates on laundries should be dealt with irrespective of persons” and directed the waterworks committee to determine “what special rates, if any, should be charged upon premises where laundries are carried on.” The discriminatory tax was never implemented.

Despite this small victory over the forces of discrimination and prejudice, governments continued to pander to sectional interests and the inexcusable injustice inflicted on Chinese immigrants to Canada was to get worse before redress began after World War II. Due to anti-Chinese pressure from British Columbia, the poll tax was increased to $100 in 1900 and then to $500 in 1903 despite there being only 17,312 Chinese settlers in all of Canada at the turn of the 20th century. Things were to go from bad to worse. In 1923, Chinese immigration to Canada was banned under the Chinese Immigration Act also known as the Chinese Exclusion Act. The law remained in force until 1947.

In 2006, Prime Minister Harper issued an apology for the head tax that was enforced from 1885 to 1923 and the exclusionary laws in place from 1923 to 1947. A symbolic payment of $20,000 was also awarded to survivors of the head tax. In 2014, Premier Christy Clark of British Columbia apologized for the more than 160 historical racist and discriminatory policies imposed by the B.C. government on the Chinese. At the end of March 2018, Vancouver Mayor Gregor Robinson announced that the Vancouver City government would apologize for its past discriminatory by-laws and practices.