The Canadian Army in Ottawa 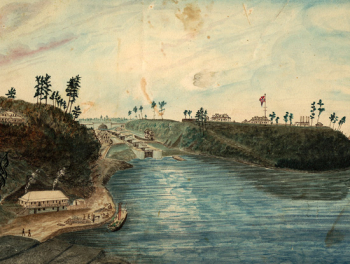 Commissariat building, shown in an 1834 painting

As Remembrance Day approaches, we remember the sacrifices of World Wars 1 and 2. But we also had military units in Ottawa getting ready to go to the Fenian Raids, the Northwest Rebellion and the Boer War. Regardless of the justice or non justice of these events, we still had men willing to risk their lives for the rest of us. Let's look at our involvement in these conflicts.

Some years ago, Colonel Strome Galloway who commanded the Royal Canadian Regiment in the battle for Ortona in World War 2 summarized the early history of the Ottawa military for the Historical Society of Ottawa ,and I am indebted to him for the information in this article. Mush of the early history of the military in Ottawa concerns militia or reserve units made up of ordinary citizens who “answered the call” when danger threatened. According to Galloway, no regular army fighting unit has ever been garrisoned in Ottawa. This is not true of the RCAF who based interceptor and reconnaissance squadrons here during the height of the Cold War However we are looking at a much earlier time.

Before we look at some unit histories, the “interesting” events that involved Ottawa citizen soldiers were the Fenian raids of 1866 and 1870 when the “Civil Service Rifles” were called up to repel invasion if necessary. The Governor General's Foot Guards provided several offices to command the 150 “voyageurs” who ferried British troops up the Nile river in 1884. Ottawa provided a group of 50 “sharpshooters”, mostly from the Foot Guards, to the troops dispatched to Saskatchewan at the time of the Northwest difficulties in 1885. About 100 men were provided by the 43rd Rifles and the Governor General's Foot Guards Foot Guards as reinforcements for the Royal Canadian Regiment in the Boer War of 1899 A member of the Rifles was awarded a “Queen's Scarf” of Honour for his involvement. Queen Victoria personally knitted seven scarves for special acts of valour in the field. She knitted three for the British forces and one each for Canadian, Australian, New Zealand and South African forces By the time World War 1 began in August of 1914, Ottawans were fully involved.

The first military unit organized in Ottawa was the Ottawa Volunteer Field Battery or “Bytown Gunners” which still exists today. It was formed in 1855 and its members have served in many conflicts. It's Second Battery, serving in the Boer War had among its members John McRae, later and still famous for his poem “In Flanders Fields” They have served in all wars since the, and are most recognizable for the salutes they fire on Parliament Hill on national occasions such as Remembrance Day.

The senior infantry regiment in Ottawa is the Governor General's Foot Guards, formed in 1861in Quebec City as the Civil Service Rifles. When government moved to Ottawa, so did the Rifles. During the Fenian Raids, all male civil servants were conscripted to guard government buildings—our first example of military conscription! In 1872, it was considered that he new Dominion should have a regiment of Guards, similar to those who guarded the Queen in London. The unit was modeled on the Coldstream Guards of the British Army Colours were first presented to the Guards by the wife of the Governor General in 1874 and the Cartier Square Armoury was constructed to house them and others in 1878 .By Royal decree, this Regiment has military precedence over all other Canadian regiments.

In 1881, 43rd Ottawa and Carleton Rifles became the Duke of Cornwall's Own Rifles and, in 1933, their name was changed to the Cameron Highlanders of Ottawa.

In 1872, there had been organized an Ottawa Troop of Cavalry. This troop became the forerunner of the 4th Princess Louise Dragoon Guards and the 4th Hussars. WE stopped using horses in War after the First World War so most “horse regiments” became armoured units and rode tanks instead of horses

Other units assembled in Ottawa, but were not really Ottawa Units. The first, in 1898, was the Yukon Field Force which was mustered to aid the RNWMP in policing the Yukon, in face of the lawlessness associated with the Yukon gold rush. In December 1899, with the Royal Canadian Regiment already on the way to South Africa., Lord Strathcona, then Canada's High Commissioner in Great Britain offered a blank cheque to recruit a cavalry regiment to serve in South Africa. This unit became known as The Lord Strathcona's Horse In 1914, another generous person, put up $100,000 of his own money to form a regiment to be named after the then Governor General's daughter, Princess Patricia. This unit became known as the Princess Patricia's Canadian Light Infantry and has just finished a tour of duty in Afghanistan, as well as serving in both World Wars. So did the Lord Strathcona's Horse, on horses in World War 1 and in tanks in World War 2 They assembled in Ottawa so all of these units have links to Ottawa and they only represent Army units. Ottawa has contributed much to Canada's military history and that fact should be better known!