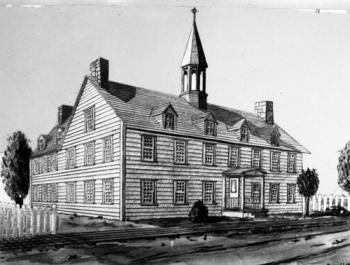 Drawing representing the first building of Bytown College, circa 1848.

The University of Ottawa was founded on September 26, 1848, as the College of Bytown by Bishop Joseph Bruno Guigues as a bilingual Roman Catholic institution aiming to bridge the gap between Protestants and Catholics as well as anglophone and francophone populations. The bilingual college originally sat in a wooden building (now the former La Salle academy) beside the Notre Dame Cathedral on Sussex Drive and served the educational needs of Ottawa’s population and the Canadian Diocesan and Catholic clergies. The college was incorporated by the Provincial Parliament in 1849 and was moved twice in 1852 before its final move to its current location in Sandy Hill in 1856 due to increase in need for space. It was Louis-Theodore Besserer, a Quebec businessman, notary and political figure who sold a substantial portion of his estate to the college. The university now sat in a stone building to the south of Séraphin Marion and had classrooms and dormitories to accommodate the students living in residence.

Though Bishop Guigues sought funds from the government and land use authorization, the early years of the college was marked with financial difficulties and questioned the college’s existence. Bishop Guigues managed to receive a government funding of £300 in 1857 (roughly $35,000 today) while Regiopolis College, Kingston (a college that focused on education only in English) was awarded £500 in 1847 and continued to receive funding each following year. This made the Diocese of Ottawa fall into debt and the college was eventually sold to the Missionary Oblates of Mary Immaculate in 1856. After the Oblates took over, the college was integrated into the foreign resources of the French order and had eight professors and ninety students which increased to 160 students three years later. The College of Bytown was officially renamed to College of Ottawa in 1861 and was offered university status in August 1866 with the first graduation ceremony taking place in 1890.

Father Guigues’ bilingual mission was continued by Father Joseph-Henri Tabaret who was dedicated to the growth and future university. In 1874, an increasing number of anglophone students and all courses being taught in English only excluding French literature and religion that were taught in French threatened the future of bilingual education in the university. Bilingualism slowly began to be restored in 1894 when the Oblate students pressured Rector Father Henri Constantineau to bring back French education which heightened the Franco-Irish tensions and was resolved when all the Irish Oblate professors, the loudest advocates for English education resigned in 1915.

On the other hand, Father Tabaret pushed towards an expansion that saw over 300 students enrolled by 1886 and made investments into sports by establishing the football team in 1881 and an Athletic Club in 1885. A highly decorated chapel that could seat a 1,000 people was added in 1887. The university also saw the creation of an English Debating Society in 1880, a first of its kind at that time with its French equivalent of  Société des débats français followed in 1887. The tremendous growth during Father Tabaret’s period earned the university an ecclesiastic charter issued by the Pope in 1889. Affiliation with other colleges and universities in Canada was made possible through legislation passed in 1891, though it remained unused for the next two decades. At this point the university had just over 400 (all male) students, most in high school level (as the university offered both secondary and tertiary education) and fifty professors.

1903 fire - uOttawa ArchivesIn the middle of difficulties (Franco-Irish conflicts and the Ontario Schools Question) that shook the university in the early 20th century, on December 2, 1903, a fire destroyed the college’s main building, costing three lives and the lost of several historical records. New York Architect A. O. Von Herbulis was appointed to design the Tabaret Hall in a Greek Neo-classical style which replaced the main building, and it was opened in 1905. The new building was named after Father Tabaret to recognize his contributions to the university over 30 years of his tenure. 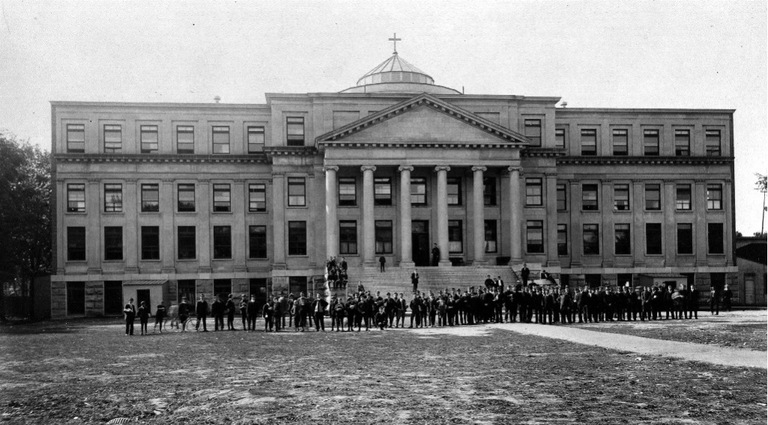 Though World Wars did not impact the university significantly, it should be noted that interwar years were important and contributed to the university’s growth given that this was the only Catholic institution offering education in French outside of Quebec in Canada. This paved way for the affiliation of twenty-four colleges and convents (many being francophone) in  Ontario and the Western provinces with the university. Women were allowed to register into courses in 1919 and between 1922 and 1936, the university saw further expansions with the establishment of school for teacher training, nursing, and faculty of canon law and arts. With this rapid growth, the university rewrote its civil charter according to the provincial legislations in 1933 and was renamed as the “University of Ottawa”. The pontifical charter was also rewritten to meet the Pius XI’s Apostolic Constitution’s requirements and was approved by Rome in 1934. The economic boom after the end of the Second World War led to the creation of nine faculties and four schools by 1965.

“The year 1965 marked the end of one era and the beginning of another.”

After rigorous negotiations with the provincial government, the Oblates handed over control to the province in 1965. The old university came to be called Saint Paul University and the province formed a new university which was named as the University of Ottawa according to the University of Ottawa Act, 1965. They became a  federated institution and share the faculties. Roger Guidon who was appointed as the Rector of the old university in 1964 remained Rector of the new university until 1984. During his tenure, he modernized the university, hired substantial numbers of lay faculty, support staff and women. The number of professors had increased from 300 in 1965 to 1000 in 1990. Financial aid from government also helped further the university’s expansion well into 2000. Regarded as the largest bilingual university in North America, today it comprises of four campuses covering 42.5 hectares with more than 40,000 students and 5,000 employees and offers over 450 programs in 10 faculties.

About uOttawa. (n.d.). Retrieved from https://www.uottawa.ca/about/

The University of Ottawa. (2019, July 20). Retrieved from https://www.ash-acs.ca/history/the-university-of-ottawa/

Story written by Nivethini Jekku Einkaran, an architectural conservation graduate from Carleton University. She has an undergraduate degree in architecture from India and is a registered architect in India where she worked as a junior architect before moving to Canada. Nivethini is a volunteer with The History Society of Ottawa.