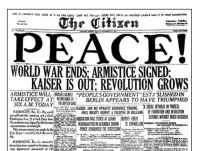 The headline in The Citizen said it all: “PEACE! World War Ends; Armistice Signed; Kaiser Is Out; Revolution Grows.” After four years and a half years of fighting, the war was over. Shortly after 5am, Paris time, on 11 November 1918, the German politician Mathias Ezberger signed the armistice on behalf of Germany in a railway carriage in the forest of Compiègne, about 60 kilometres north of Paris. It was to take effect six hours later, allowing time for the news to reach the front—a delay that cost many men their lives as fighting continued right up until 11am. The last Canadian soldier to die in the war was Private George Lawrence Price of the 2nd Canadian Division who was killed at 10.58am by a sniper while his unit attempted to take the small Belgian village of Havré near Mons.

News of the armistice reached Ottawa via an Associated Press dispatch at 3.06am that Monday morning. Seconds later, electric lights throughout the capital blinked four times—a pre-arranged signal organized by The Ottawa Citizen with the Ottawa Electric and Hydro-Electric Companies to indicate the arrival of peace. Except for patrons of all-night diners, most Ottawa citizens were home in bed, though many had left their lights on in hopes of witnessing history in the making.

Two days earlier, mid-Saturday afternoon, Ottawa’s electric lights had also blinked; that time twice on news that Kaiser Wilhelm II had abdicated. Within minutes, the streets were a mass of exultant people, celebrating the end of the “Beast of Berlin,” and the overthrow of the House of Hohenzollern. Vehicles of all descriptions, flivvers, touring cars, tractors, and trucks, many decorated with flags and pennants, and loaded with people, slowly made their way down Sparks Street. The noise was deafening. In addition to horns, tin whistles, and the beat of pots and pans, some automobile owners had attached whistles to “cut outs” in their car exhaust pipes adding still more decibels to the cacophony. That evening, a mob of celebrating young people paraded through the revolving doors of the Château Laurier Hotel, past the statue of Sir Wilfrid Laurier in the rotunda, and into the dining room, to the applause of diners. Shortly after 11pm, an effigy of Kaiser Bill, decorated with pictures of Grand Admiral von Tirpitz, the instigator of unrestricted submarine warfare, the Austrian Emperor, and the German Crown Prince, was burnt on Connaught Square. The effigy had been made by the Citizen press-room staff using oil-soaked rags and waste. It was set alight by Chief Graham of the Ottawa Fire Department. The crowds started to disperse after midnight to await news that peace had arrived.

An armistice had been expected the following day. But Sunday came and went without an announcement. Nonetheless, plans for the big day went ahead. Ottawa’s Mayor Fisher announced that the day of the armistice would be a public holiday. A “monster” parade was scheduled. A request went out for all car owners to decorate their vehicles with flags of allied nations, and join the parade. Along with the war veterans and members of the 2nd Battalion stationed at Lansdowne Park, the letter carriers would parade in uniform. The pipe band of the St Andrew’s Society was also requested to gather for the march on Parliament. Kiwanis Club members were asked to form up at the entrance to Parliament Hill close to Bank Street. A series of floats were also planned, including one of a boat on which the Kaiser was on his knees tied to a winch.

When the news finally broke in the wee hours of Monday morning, the city went wild; the ensuring celebration far outstripped anything two days earlier. As the Citizen noted, Saturday’s celebrations merely marked the passing of a murderer and tyrant, while Monday’s “was a celebration of the greatest victory for civilization in the history of the world.” After the city’s lights flashed, Ottawa residents were summoned to the streets by the sound of fire station gongs and sirens, factory whistles, and church bells. In these days before radio, telephone girls quickly spread the word across telephone exchanges. Whole families, tousled haired and hastily dressed, stumbled out onto the early-morning streets waving flags or pennants, and blowing tin horns. The Postmaster-General, Lieutenant-Col. Hon. Pierre-Édouard Blondin was in his home library on Range Road when his electric lights blinked. Immediately, he and his family got dressed and drove in their car to Sparks Street where they found themselves at the head of an impromptu parade of celebrating citizens.

At 3.10am, the Citizen posted the new bulletin “GERMANY SURRENDERS” on their Sparks Street office window, eliciting prolonged cheers from the growing throng outside. A short time later, the skirl of bagpipes could be heard over the din, emanating from the corner of O’Connor and Slater Streets, followed by the sound of drums and horns of the “Victory Loan” and G.W.V.A. (Great War Veterans’ Association) bands that had quickly assembled. Making their way to Parliament Hill, they played “Maple Leaf Forever,” with thousands of voices joining in the song. After the last chorus, the bands struck up the famous tune of the “Old Hundred,” to which the crowd sang “Praise God From Whom All Blessings Flow.” After a moment of silence, an immense cheer went up that lasted for more than two minutes. The massed bands and then played another old church favourite “Our God Our Help In Ages Past.” As dawn approach, Reverend (Major) T. Thompson gave a concluding prayer. Afterwards, the bands struck up some familiar tunes, followed by the National Anthem, and, finally, “Tipperary,” in tribute to the boys a long way from home in the trenches in France and Belgium. Unabashed tears ran down the cheeks of many as they sang.

The Ottawa Citizen described the scene as one of “extreme beauty.” Above the heads of the crowds, stars sparkled, with a faint hint of dawn in the east. Over at Connaught Square, the lights illuminating the Victory Loan campaign, which included a huge promotional “cash register,” twinkled, giving the appearance of a “fairy spectacle.” High in the sky, the large electric sign mounted on top of the Château Laurier Hotel read “Victory” instead of “Buy Victory Bonds,” thanks to a quick-thinking hotel electrician. On Wellington Street, a bonfire cast an orange, flickering glow on the surrounding buildings and the milling crowds. The partying continued through the day. Stores, decorated in flags and bunting, experienced a run on Allied flags. One shop even sold out of old Diamond Jubilee Flags, bearing an image of Queen Victoria, left over and almost forgotten from the 1897 festivities.

The official celebrations began at 2pm that afternoon with more than 10,000 people assembled on Parliament Hill. In a huge parade, veterans and the G.W.V.A. band, directed by Lieutenant Jones, assembled on Cartier Square, and marched to the Hill. There, the “vets” met up once again with the “Victory Loan” band, conducted by Sergeant Cook, in front of the new Centre Block, still being rebuilt after the disastrous fire of 1916. On either side of the steps leading up to the building were soldiers representing the allied nations holding their flags. At 2.30, the official party arrived, including the Governor General and his wife, the Duke and Duchess of Devonshire, Lady Borden, the wife of the Prime Minister (Sir Robert Borden was in England at the time), Hon. Newton Rowell, the President of the Privy Council, as well as senior religious and military leaders.

After being introduced by Mr Rowell, the Governor General spoke of the major role played by Canadian troops in achieving victory, and how glad he was to be in Canada and “share in the pride that Canada had every right to feel.” He added “the Empire would never forget the deeds of its soldier sons, on land, in the air, and on the seas.” He concluded by saying that “we have laid the foundation for a long peace.” Although the Governor General was wildly cheered, the newspaper reported that his speech was difficult to hear owing to “small boys extracting horrible sounds from tin horns.” After prayers of thanksgiving offered by the clergy, the two bands reprised the hymns that they had played earlier in the morning in the spontaneous celebrations that had occurred immediately follow news of the armistice. The official ceremonies concluded by a speech from Rowell who spoke of the “debt of gratitude” owned by the nation to those who sacrificed their lives for the Empire in the fight for civilization. He also read out to the cheering crowd the armistice terms signed by Germany. The proceedings ended with a rousing rendition of “Rule Britannia.”

That evening, a special Thanksgiving service was held at St Bartholomew’s Church with the Governor General reading the lesson. The following day, 12 November, another Thanksgiving service was held at Christ Church Cathedral at noon. Among the congregation were the Duke and Duchess of Devonshire, Sir Wilfrid Laurier, and Lady Borden. Later that day, members of the Ottawa Motor Club assembled at the corner of Wellington and Bank Streets for the “Great Victory Parade” down Rideau, Bank, and Sparks Streets.

Sadly, as we all know, the Governor General’s hope that the war had laid the foundation for a lasting peace was not fulfilled. Twenty-one years later, a new generation of Canadian soldiers were called to arms.