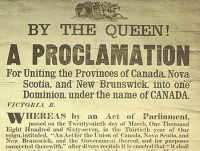 Proclamation announcing the formation of one Dominion, under the name of CANADA, 1867

Each 1 July, Canadians across the country celebrate Canada’s birthday with cultural events and fireworks. The anniversary, which officially became Canada Day in 1982, was originally known as Dominion Day. Nowhere is the national holiday more sumptuously celebrated than in Ottawa, the nation’s capital. On the greensward in front of the Parliament buildings, thousands of patriotic Canadians flock to see the “Changing of the Guard,” performed by the Governor General’s Foot Guards dressed in their traditional scarlet tunics and bearskin hats. Canadian performing artists entertain the crowds through the day on a large stage specially erected for the occasion. After dusk, Parliament Hill is lit up with a dazzling display of fireworks.

Given this annual burst of patriotic fervour, it may come as a surprise that many Canadians don’t fully understand the event they are celebrating. Even officialdom gets it wrong. The Official Website of Ottawa Tourism, describes Canada Day as “the anniversary of Confederation, when Canada became a country separate from the British Empire.” Yes, 1 July is indeed the anniversary of Confederation. But no, Canada did not become separate from the British Empire on that date. Canadian legislative autonomy did not come until the Statute of Westminster in 1931, when the imperial government in London gave up its right to legislate for Canada and other Dominions. Even then, Canadians remained British subjects, and regarded themselves as members of the British Empire. Canadian legal decisions could also still be appealed to the Judicial Committee of the House of Lords in London, and Canadian constitutional changes required the consent of the British Parliament.

Instead of representing the birth of a new independent country, Canada Day marks the anniversary of the union of three pre-existing British colonies in North America—the Province of Canada, which itself was the result of the fusion of Upper and Lower Canada in 1841, Nova Scotia, and New Brunswick. The new entity was called the Dominion of Canada, hence, the original name for the holiday. The proclamation of the new Dominion by Queen Victoria on 1 July 1867 was the culmination of years of negotiations to unite the colonies of British North America. Motivated by a range of economic and political factors, including fears of annexation by their U.S. neighbour to the south, the “fathers of Confederation” had met in 1864, first in Charlottetown and later in Quebec City, to thrash out the details of forming a federation. After working out most provisions dealing with the country’s organization and the distribution of powers between the federal and provincial governments, a small group of nation-builders met in London, England in December 1866 to put the final touches on draft legislation to be submitted to the British Parliament. John. A. Macdonald had wanted the official name of the new federation to be the “Kingdom of Canada.” But at the eleventh hour, the British government, concerned about offending the republican government to the south, suggested “Dominion” as a less provocative style.

The British North America Act was first submitted to the House of Lords on 19 February 1867. There, the colonial secretary, Lord Carnarvon, opened the proceedings by saying: “We are laying the foundations of a great State, perhaps one that at a future date may even overshadow this country.” A week later, the bill was introduced into the House of Commons. The bill passed through the British Parliament without change, and was given Royal Assent on 29 March 1867, to take effect on 1 July.

The Act, which became Canada’s constitution, delineated the respective powers of the federal and provincial governments, and guaranteed minority rights, including linguistic rights. The Province of Canada was also split into its two component parts, allowing Canada West (Ontario) and Canada East (Quebec) to separately govern their own local affairs instead of together—a source of considerable strife during the previous twenty-five year existence of the Province of Canada. Some saw Confederation as a bulwark against U.S.-style democracy where majority rule could trump minority rights. The Ottawa Times declared that “The first of July, A.D., 1867, will ever be a memorable day in the history of this continent. It will mark a very solemn era in the progress of British America. By the Constitution which this day comes in force will be solved the great problem—a problem in which not we alone, but the whole world is intimately concerned—whether British constitutional principles are to take root and flourish on the Western Hemisphere, or unbridled Democracy shall have a whole continent on which to erect the despotism of the mob.”

The birth of the new Dominion of Canada was greeted with great enthusiasm in Ottawa. Selected by Queen Victoria in 1857 as the capital of the Province of Canada, it was now the capital of a far larger political entity; few had doubts that the remaining British colonies in North American would join the new Dominion, building a country that spanned the continent. This took some time, however; Newfoundland and Labrador, the last to join, didn’t sign up until 1949.

In Ottawa, the partying started the night before the big day as people made their way to Major’s Hill to welcome in the new Dominion at midnight. At the stroke of twelve of the Notre Dame Cathedral clock, a huge pyramidal bonfire made of firewood and tar barrels, surrounded by a ring of boulders to protect spectators, was set ablaze. Thousands of Ottawa citizens, including the Mayor and members of the city council, gave “three hearty cheers,” for the Queen, and three more for the new Dominion of Canada. Churches throughout the city rang their bells, while the Ottawa Field Battery at the drill shed in Lower Town gave a 101-gun salute to the new country. Rockets and Roman candles lit the sky. Paul Favreau and his band played music to the crowd until dawn.

Proclamation announcing the formation of one Dominion, under the name of CANADA, 1867With the arrival of daylight on Monday 1 July 1867, the city “never looked better” to greet the thousands of visitors that were streaming into the capital from the countryside to join in the festivities. Bunting, flags, and streamers decorated public and private buildings alike along Sparks, Rideau and Sussex streets. At 7am, a lacrosse tournament between the Huron and Union Clubs commenced on Ashburnham Hill, the area east of today’s Bronson Avenue, between Lisgar Street and Laurier Avenue. At 10am, an honour guard from the Rifle Brigade took up position in front of the East Block on Parliament Hill to await the arrival of Lord Monck, the newly designated governor general of the Dominion of Canada. A half hour later, a salute from the Field Battery announced Monck’s appearance who was received by guards with presented arms. At 11am, the Queen’s proclamation was read out by Ottawa’s mayor. Dignitaries then entered the Executive Council Chamber. Monck, in plain clothes, advanced to the head of the Council table, read the Royal Instructions making him Governor General, and was sworn in by Canada’s Chief Justice. After the various oaths, the Field Battery on Major Hill’s gave another salute. The Governor General then conferred the title of Knight Commander of the Order of the Bath on John A. Macdonald for his contribution to making Confederation a reality. Several others received knighthoods of lesser orders. George-Étienne Cartier, Macdonald’s partner, was also offered a knighthood, but he refused it on the grounds it was inferior to that awarded to Macdonald. The following year, Cartier was made a baronet, a more illustrious honour, which also carried the title “Sir.”

At noon, a massed military display was held on Parliament Hill, consisting of the Rifle Brigade, the Civil Service Rifles, the Carleton 43rd Infantry, the Ottawa Provisional Battalion of Rifles, the Ottawa Provisional Brigade of the Garrison Artillery, and the Ottawa and Victoria Cadet Corps. The show was slightly marred when the Civil Service Rifles fired a “feu de joie,” a sort of grande finale. Unfortunately, the order to “Fire” was not preceeded by the command “Remove ramrods.” A volley of ramrods was launched from Parliament Hill, across Wellington Street, to land in a hail of sparks on Sparks Street.

The military display was followed by athletic games on Major Hill. Games included the “standing” and “running” leaps, the 100-yard dash, as well as boat and canoe races. Across the city, a lunch was provided to the Carleton Infantry by Alderman Rochester at his own expense. The previous night, he had heard that the men would be arriving from the country for the parade and festivities without any refreshment organized for them. The alderman hosted the men and their families outdoors at his home, determined to rescue the “fair name of the city from the charge of want of hospitality.” More sporting events were held in New Edinburgh, including some unusual ones—a three legged race, a blindfold race, and a cricket ball throwing contest.

In the evening, another bonfire was lit, this time at Ashburnham Hill. Twenty-two cords of wood were sent up in flames. After dusk, fireworks were launched at Parliament Hill. Across the water in Hull, people picnicked as they watched the display. Music and dancing continued to the wee hours of the morning before Ottawa’s populace returned home exhausted, citizens of a new Dominion.